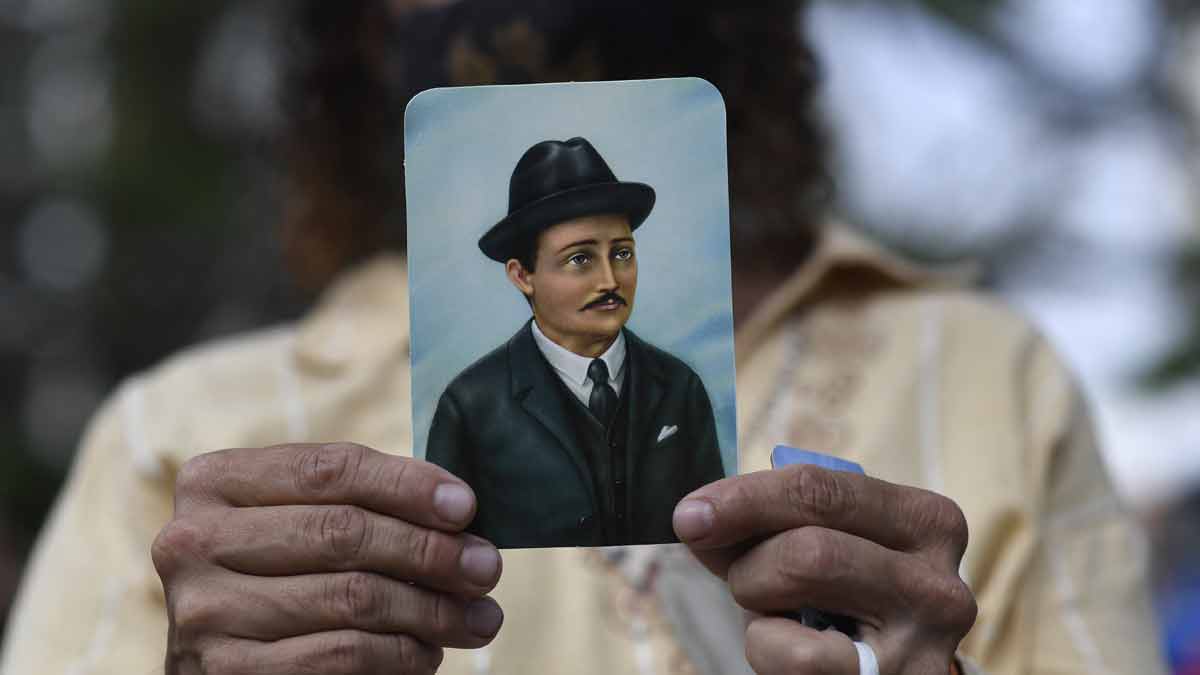 The “Doctor From the poorJose Gregorio Hernandez was venerated as a saint in the Venezuela, This Friday in the new blessing of Catholics has become an event that millions of believers have anticipated for decades.

“With our apostolic authority, we grant that to the great servant of God Jose Gregorio Hernandez CisnerosA faithful secular man, expert in science and brilliant in faith, who realized in patients the face of the suffering Lord as the Good Samaritan, and helped them with evangelical love, and heal their physical and spiritual wounds, from now on he is called Blessed, ”said Apostolic Aldo Giordano in a small religious ceremony held in Church of a school in Caracas.

“Long live Jose Gregorio!” José Gregorio us! The attendees were voiced immediately afterwards, while a mosaic of the “servant of God” was revealed, dressed in the typical black suit, robe Doctor And a stethoscope with a halo on the head.

The beatification of Jose Gregorio Hernandez (1864-1919) It cannot be done in gross action Some stadiums have a capacity of thousands of people, as was initially thought, due to a pandemic Covid-19What does he have Hospitals in Venezuela are overwhelmed With The second wave is ferocious.

Rather, the Blessed announcement It is made official in a small law for 150 people at La Salle School Church, with access restricted.

Church bells rang in the popular La Candelaria neighborhood, where his remains remained until October 2020, when his body was exhumed for the process of beatification, after the announcement with about 300 believers gathered in the suburbs.

And in the corner where the venerable died, in La Pastora, in the city center of Caracas, Believers laid bouquets of flowers Next to a mural framed by a Venezuelan flag.

“José Gregorio is a saint who deserves all our efforts, because he has performed many miracles here in La Pastura.” Said Nike Contreras, a 56-year-old merchant from La Pastura, who participated in the restoration of the statue. Doctor In gypsum.

“I pray to him every day and he has helped me a lot.”

Venezuela, with a population of 30 million, has faced a second strong wave of the virus since March, with more than 2,000 deaths and more than 200,000 infections. Official figures have been questioned by the opposition and Owenig, considering that there is a significant underreporting evidenced by surplus hospitals and multiple requests for financial assistance in social networks to pay for treatment.

Who is Jose Gregorio Hernandez, doctor of the poor?

That the beatification takes place in the midst of a pandemic gives a unique aura to the action, because that is Doctor It was his turn Fight the Spanish flu In your country a little over a century ago.

“It comes at a dramatic moment,” the ambassador said the week before the ceremony. “As a scientist who fought viruses, he wrote in the stars that he must be beatified when humanity needs hope, needs to find a way” and “he can help us.”

Jose Gregorio Hernandez It is distinguished by providing free medical assistance to the poor It is not uncommon for a Venezuelan to have a picture or statuette of him with candles or a glass of water (one of the traditions when praying to him).

Thousands claim to have saved them Doctor A miracle for decades, but it wasn’t until June 2020 that Pope Francis signed the decree of beatification After a case is “approved” Yaxuri Solorzano, 10, survived a gunshot in 2017 Very serious. Her mother asked Jose Gregorio Hernandez to rescue her.

Poetry, recounting a note from the Venezuelan Episcopal Conference, a hand on his shoulder and a voice: “Keep calm, everything will be fine!”

Beatification is the last step before sanctification.

Yaqsuri and his family are with relatives Doctor Hernandez was among those who attended the Beatification Mass.

Pope Francis expressed his hope that this ceremony would help “reconciliation” in Venezuela, a country suffering from a serious political and economic crisis.

“The beatification Doctor Hernandez is a special blessing from God to Venezuela and calls on us to guide us towards more solidarity (…) in order to achieve the much-needed public good response in order to revive the country, and to be reborn after the epidemic, in the spirit of reconciliation. “The Pope said, Thursday, in a message. On the occasion of the celebration.