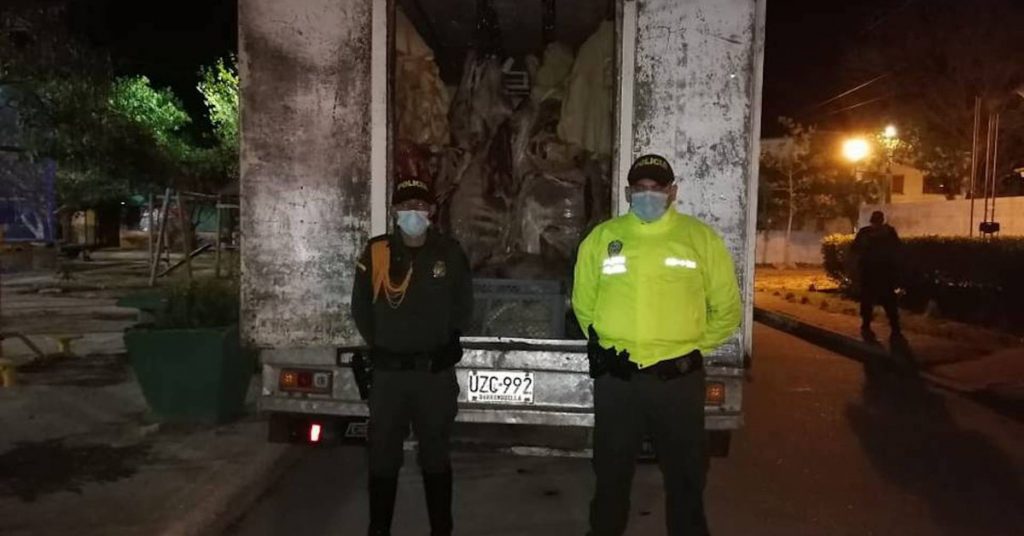 In a van driving on the road linking the municipalities of Sabanagrande and Malambo, The Atlantico police arrested the driver because he was carrying five tons of beef in a state of decomposition between flies and cockroaches..

The carrier was arrested in Kilo 68 on the eastern road From the Atlantic Ocean Road. Meat was confiscated during a search and surveillance operation.

“In violation of the minimum sanitary control measures for meat transportation and subsequent human consumption, 5,133 kg of beef were seized when transported inside bags that were inside a vehicle bearing UZC 992 plates registered in Barranquilla.”

Then, all the cargo that came into contact with the cockroaches that surrounded the entire cargo It was left at the disposal of the Atlantic Health Department to report the situation and investigate the circumstances in which the product was dispatched by suppliers..

Through a statement, Colonel Edwin Orlando Rogas Chesco, Deputy Commander of the Atlantic Police announced that they will continue to implement controls to ensure the correct transport of meat-type food:

In its head-to-head battle against cattle hunting, the Atlantico County National Police has been able to confiscate meat products through search and surveillance operations conducted on the county’s main roads. These control measures will continue to be implemented, with carriers of livestock and meat products complying with the required sanitary rules and corresponding permits.

Although the company so far responsible for transporting, distributing and supplying meat to supermarkets and butchers in Atlántico is unknown, Rojas Chisco stated that all seized meats are valued at more than 90 million pesos.

According to what the police who attended the operation saw, after asking the driver to open its doors, insects such as cockroaches and flies could be seen that penetrated the product on the meat it was carrying.

For his part, the sub-commander asked the residents of the Atlantico countryside to report any suspected case of theft, marketing or transportation of livestock in their municipalities, taking into account that they discovered anomalies in the maintenance and transportation process. Products of animal origin.

So far, the authorities have not announced the punishment or prosecution of those responsible for this fact, as the existence of criminal networks dedicated to marketing these products in poor condition is not completely ruled out, thus taking advantage of the illegal markets that are created in the municipalities. Capitals of Atlántico residents or, failing that, individuals involved in cattle theft or irregular transport of dead animals off the Caribbean coast.

New measures in the Atlantic include curfews, dry law and beach closures
The Government of Colombia seeks to accept eight products in twelve international markets