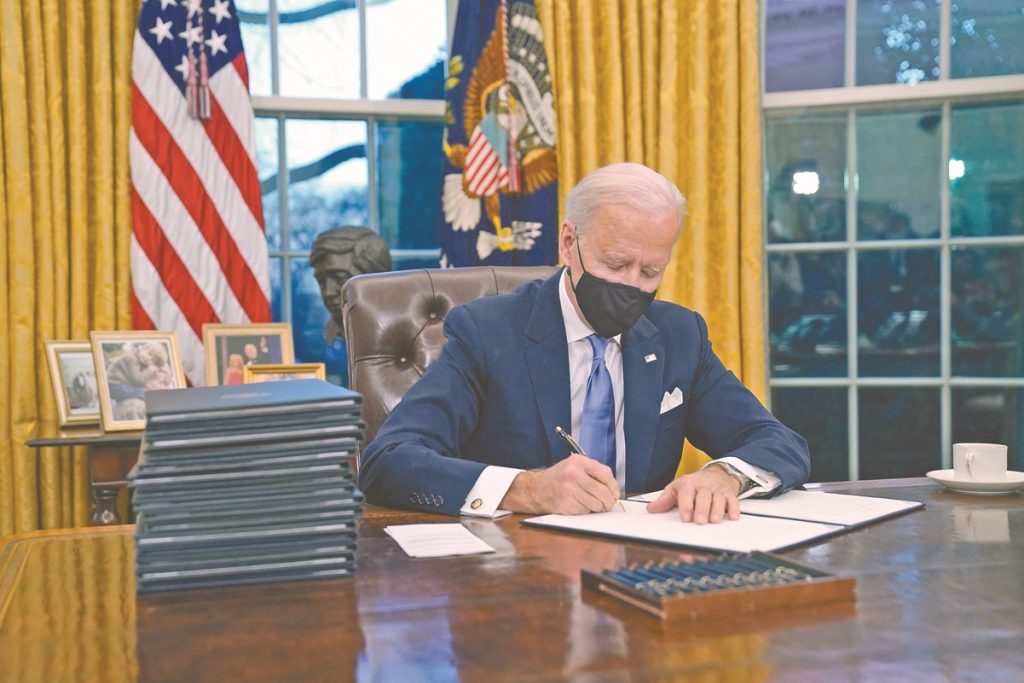 On his first tweet as president, Joe Biden made clear his intention to start working from the first minute. “There is no time to lose when it comes to dealing with the crises we face,” his official account was published minutes after the oath. He said and did: Once the pomp and circumstance were over, the formalities ended, and with everyone there, Biden went to work.

Getting rid of the mess his predecessor left him would be a mammoth task, and even more so with all the promises he made along his way to this day, so are the hopes pinned on the multiple actions in his first 100 days.

In the first photo in the Oval Office, which has been completely redecorated (except for curtains that hold the previous tenant’s gold pending a more in-depth design change), Biden is shown with a pile of folders and documents to sign on the right: 17 Executive Orders to start his cabinet mechanism.

Surrounded by busts of Martin Luther King, activist Cesar Chávez, Rosa Parks, or Eleanor Roosevelt, and in front of a portrait of Franklin Delano Roosevelt, Joe Biden began stamping his signature (with a ballpoint pen, not with a giant marker like his predecessor). Decrees that must guide its administration.

The first thing he signed was a clear message: The biggest crisis it faces today is the coronavirus epidemic, and he will spare no effort to stop it. That’s why he decided to create a mandate for face masks and social distancing on federal property. After that, a work order for racial equality; And back to the Paris climate agreement.

In the list of signed actions, it has also stopped funding the wall on the border with Mexico; DACA, the program that protects tens of thousands of undocumented young people from deportation, has returned to its starting position, removing any barriers imposed subsequently; Urged joining the World Health Organization (WHO), canceled construction of the Keystone XL pipeline, and abolished veto power over immigration from Muslim-majority countries, among others: a set of measures to reverse some of the most controversial and controversial of the outgoing administration, It shows the country and the world that there is a new leader in leadership and that things are actually being done differently. Later, it discontinued the “Stay in Mexico” program, whereby asylum-seekers in the United States have to wait their turn to be heard in the neighboring country.

Foreign Minister Marcelo Ebrard welcomed the measures relating to the wall and DACA, and noted that President Andres Manuel Lopez Obrador told Biden that “bridges open the way for cooperation and understanding.”

And Kamala Harris wasn’t wasting time. “What’s the first thing you’ll do?” Some journalists shouted at her as the new vice president headed to her new offices, at the victory rally after the opening ceremony. He replied, “Go to work.” Just as Biden did with his edicts, Harris, too, did his homework.

A few minutes after the story was snapped in front of the office building that would occupy it, Harris climbed back into the official car to return to the Capitol building and fulfill his first official duty: to preside over the Senate and swear in the senators who haven’t yet done so. He claimed his seat.

It was the case of John Usoff and Raphael Warnock, second-round winners in Georgia, and Alex Padilla, the person chosen to fill the vacancy left by Harris herself in California. The Three Democrats, all of them have three shattered historical milestones: first millennials, first African-American from Georgia, and first Latino from California, respectively.

But the most important thing: by inaugurating them all, the Senate was completely to the left, and the absolute power of the Democrats in Washington was consolidated: the Senate was left with 50 senators for each party, but the vote to cast Harris, as the president of the Senate, upset the balance between the Democrats.

Republicans were losing their last bit of power in the capital, and Governor Mitch McConnell, who in recent years had become a very powerful figure, was relegated to the background. The new Senate Majority Leader is Democrat Chuck Schumer, who hasn’t wasted a minute changing his Twitter résumé to make it clear that he’s now the one with the camera handles.