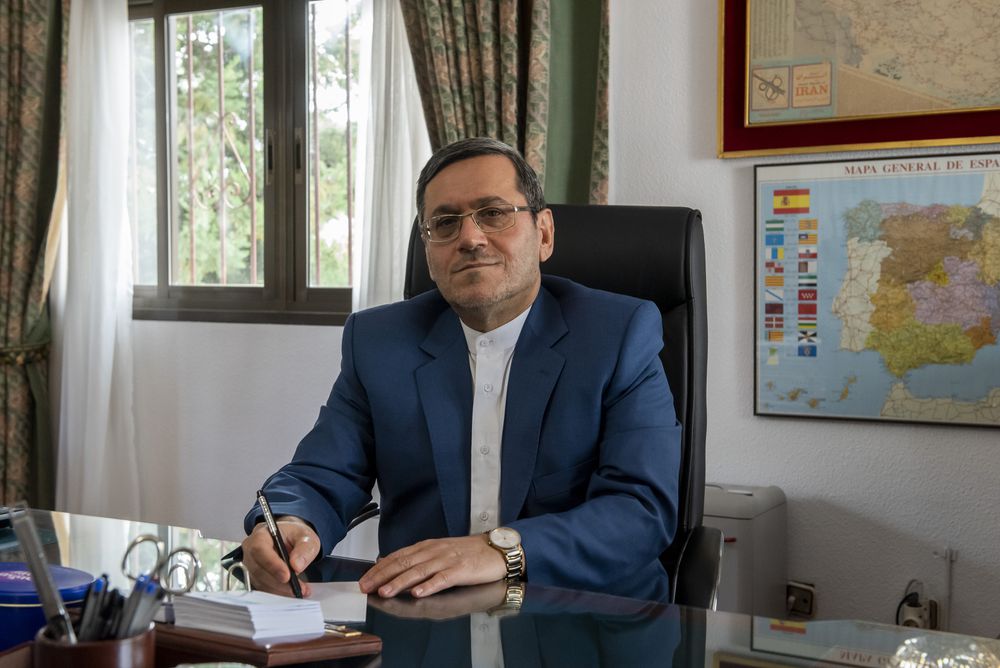 Hassan Qashqawi has a serious behavior. At first it is difficult for the Iranian ambassador to Spain to smile and even talk about himself and his country, but it is only a front. Behind this appearance of a person in a suit, there is a revolutionary past for which he was arrested three times and a powerful human rights defender. February 11 is Iran’s National Day, which commemorates Ayatollah Ruhollah Khomeini’s victory over Shah Muhammad Reza Pahlavi in ​​1979.

The first time Qashqavi was arrested (Babol, Northern Iran, 64) he was only 17 years old. He went to Tehran and gave a speech in favor of a parliamentary democracy. “Sha means king, but it was not a monarchy like the Spanish regime. It was a dictatorship in which the Shah had all power. We fought against this oppression to achieve greater freedom and independence,” he describes. The diplomat said that the arrests of the security and intelligence service did not last more than 24 hours, “perhaps because they did not reach the age of majority at that time.” He never went to jail. I have never been tortured, but I have friends who had a very bad time. Some of them were even executed, “he recalls with some sadness. This first arrest was followed by two others.

Qashqawi began his studies in geography, but left it to study law and major in human rights. In 1988 he entered his country’s diplomacy. He started in charge of relations with the United Kingdom, but after only two years he became an MP for Tehran in the Iranian Parliament and was a member of the parliamentary group in support of human rights. And he held the position of deputy for the second time after switching his position in the Ministry of Foreign Affairs. Having been ambassador to Kazakhstan and Sweden, he was a foreign ministry spokesperson and deputy minister – similar to the Spanish foreign minister – which allowed him direct contact with journalists. At the end of 2018, he settled in his current position in Madrid.

The ambassador speaks Persian, Arabic, English, and understands Russian. He is now studying Spanish, which he admits is difficult. He admitted with a smile “above all, the articles and the fact that the names have gender.” The population of the Iranian colony in Spain is about 14,000, 3000 of whom live in the community of Madrid. His profile is “wealthy residents and university professors interested in Spain”, as well as investors in real estate, hotels and restaurants, especially in the southern part of the peninsula.

Diplomatic relations between Spain and Iran are among the oldest to be documented. They date back more than 400 years, according to Qashqawi. There are reports of the exchange of ambassadors between King Philip III and Sha Abbas the Great. A few years ago it was shown in two fairs in Madrid and Alicante. “It is proud to be able to implement this position which has had so much history between the two countries,” says the diplomat in Persian, who later translated it to his press advisor.

Behind these relations is the Iranian nuclear race and the sanctions imposed by the United States (the United States). Qashqawi complains about the collapse of his country’s trade with Spain. If the trade balance between the two countries under the nuclear deal reaches 2,600 million euros, the Trump administration’s unilateral exit from the nuclear deal has now brought it to less than 200 million euros. It was mainly about importing agricultural technologies, such as greenhouses, from Spain. Gas pipelines, medical equipment and relocation of irrigation systems. On the contrary, Spain imports foods such as pistachios and saffron. Now is the arrival of Iranian oil. Now the ambassador hopes that the arrival of Joe Biden to the presidency of the United States will lead to an end to sanctions and the resumption of international trade for his country.

See also  The service is improving its tool for transferring

“The epidemic has hit us badly in our country and has worsened even more because these sanctions mean that many countries did not sell us medical supplies. Imports did not arrive,” the diplomat objected. In Spain, the virus did not cause any deaths in the Iranian colony. Four flights were chartered to transport us. Part of these visitors, in coordination with the Spanish authorities.

The Embassy and Consulate of Iran is located on Calle de Jérez, in Chamartín, along with other legations. Of course, Ghashghavi’s official headquarters are located in La Moraleja (Alcobendas), highlighting that both places are exceptional and that they allow you to enjoy “extraordinary” Madrid and practice your favorite sports – swimming and volleyball -. With recent snowfall, 30% of the embassy trees have fallen. It was as if he had broken part of our hearts because those samples had been there for a long time as embassy guards, “he adds. Qashqawy used to wander around the capital, especially in the city center, but where he says he feels” at home “is located in the small towns in the northern part. From the region, he says, “They are a bit like northern Iran, where I came, and I love them.” “I have to admit that I really liked the city when I visited it about five years ago as the deputy foreign minister,” he says.

The current vaccines are not thundering

Iran’s ambassador to Spain, Hassan Qashqavi, does not plan to be vaccinated when required. At least with the two current vaccines in the European Union. The authorities in his country rejected them and he plans to do the same. Both come from the US and UK and both countries have imposed harsh sanctions on us. How can we then trust their vaccines? “He asks himself in relative anger. What is clear about him is that if Spain produced his car, he would wear it“ without any problem. ”In Iran, three vaccine projects are under development. One of them is a 100% citizen, while the other two are being analyzed with Cuba and China. “They are already very advanced and will soon be tested on people, and we hope that with very good results.” Iran has always been very advanced in medicine historically. In fact, some scholars believe that the word medicine comes from the Persian physician Avicenna [980-1037]It is still being studied today and is considered the basis of current medicine, “he adds.