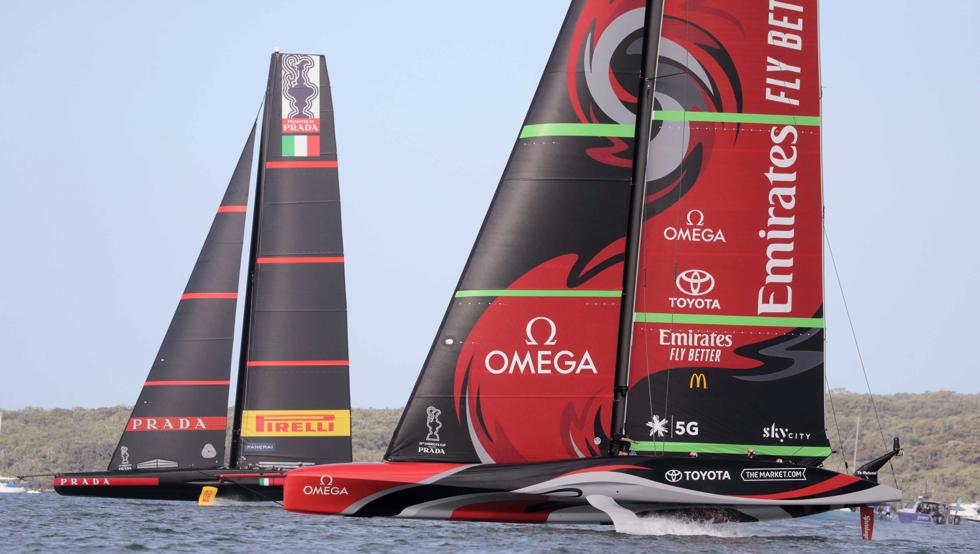 that ‘Rahutai‘(Sea breeze) Emirates Team New ZealandUnder the command of Peter burling, Was declared the winner of Auckland Mundial 2020 (New Zealand) beating the last race of the day ‘red Moon’ Italian 16 seconds ahead in an epic finale.

The New Zealand team had a great day, winning their first race of the day ‘Patriot’ Dell American Magic 1’16 “round off with a final victory by the American against the Italian squad under Australian command James spithill And italian Francesco de Angelis.

The race course has had a tough day since the low intensity of the wind, which started from 9–13 knots (16 to 24 km / h) and dropped to 6–7 knots (10–12 km / h). . The final race already had problems with hundreds of spectator boats that follow the development of the AC75 in the water.

Change of route proposed by Regatta director Ian Murray Shortly before the start of the day, they left the spectator boats in the middle of the race course and security teams had to go out to clear the situation and the first race of the day was delayed and took an hour at the start.

Problems of British INEOS Team Still continues today and have not completed two races against him ‘red Moon’ And this ‘American Magic’ And everything was settled between the remaining three contenders.

In his first match of the day, The Team new zealand He was looking to avenge his defeat on Thursday American magic. Americans with New Kingpin Dean barker As captain, he took the lead early on and took a 12-second lead on the first bua. Burling At the end of the second leg, reduce it to just 3.

See also  United States .- (Emp.) IFM believes that it can support and open doors to naturalization in markets such as Australia and the United States.

When did everything decide ‘Patriot’ Made a serious mistake in the third leg and put New Zealanders ahead in 54 seconds and had excellent mobility ‘The Rehutai’ He did not forgive for winning in the next three stages with a final margin of 1 minute and 19 seconds.

If New Zealand won the World Series and if the final race was decisive ‘red Moon’ The table will have a triple tie.

that ‘red Moon’, In a great departure from his mentor, Australian James spithillMoved aside ‘The Rehutai’ And the Italians were over 200 meters and 32 seconds ahead at the end of the first leg. Also, an error of Team new zealand This left him ‘nicked’ en route via the next boat and the Italian profit margin was increased to 800 meters.

soon afterward, ‘red Moon’ It was also ‘nested’ and everything was pending as to who was going to lift the first ‘flight’. that ‘The Rehutai’ He did this earlier, doubling his speed ‘red Moon’, 24 to 12 nautical miles respectively. The route was shortened and the Italians kept the pressure on the ‘kiwi’.

The ending was impressive, but with minimal margin Team new zealand He did not lose his advantage and won by 16 seconds.

Team New Zealand flight controller said, “When the wind fell at 6 knots (10 km / h) we were very nervous and we could not use the ‘feel’.” Blair tuke, “But it was an epic racing day,” he concluded.

Winner of the semi-finals.