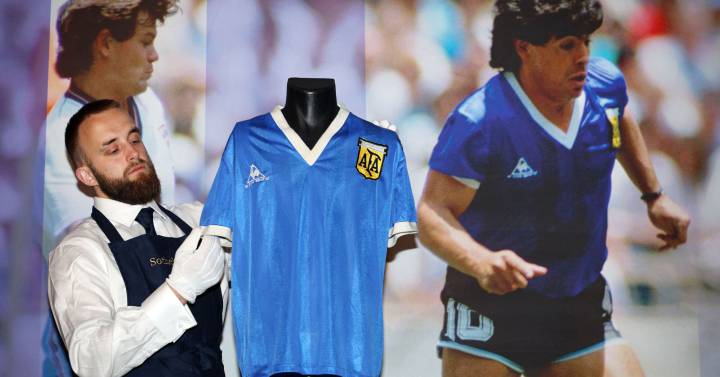 The number 10 shirt he was wearing Diego Armando Maradona When he scored the historic “Hand of God” goal, also known as the Goal of the Century, in the 1986 World Cup quarter-final in Mexico against England, it was sold at Sotheby’s for £7.1 million (€8.4 million).

That amount is a record for any item previously offered by Sotheby’s, which auctioned Maradona’s shirt in a two-week virtual auction. The previous record-holding object was the 1892 Olympic manifesto, which was auctioned for $8.8 million (€8.34 million).

And Steve Hodge was the owner of the shirt until today, after Maradona gave him to him at the end of the World Cup quarter-final match.

In that match, Maradona scored two goals in the second half to eliminate the English. The first, with his hand, on Peter Shilton, and the second, dribbling past half an English team, in which he is considered one of the best goals in history.

Hodge, a member of that England, gave the jersey to the National Football Museum in Manchester (UK) for many years, but decided to auction it off in 2022 because he believed “this is the time for it”.

The buyer of the shirt has not been disclosed. However, according to some Argentine media, it is a group from the United Arab Emirates