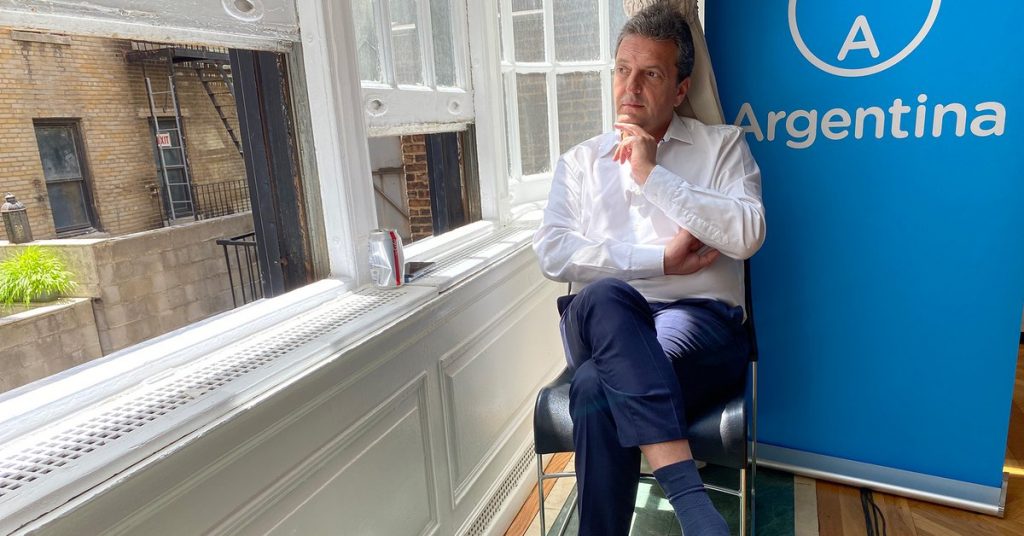 Sergio Massa at the Argentine Consulate in New York

New York The midday sun overwhelmed Manhattan and two key players in the future of Argentine politics intersect without seeing each other. Maria Eugenia Vidal, a wide, white cotton summer dress, walks seriously and fast with her partner, Kiki Sacco, on Fifth Avenue. only 50 meters away, Sergio Massa He meets representatives of banks and investment funds in a large room in the Argentine Consulate.

Each guest at the table carries a leather-wrapped copy of Argentina’s National Constitution. Those constitutions were the institutional share in the arsenal of gifts that the Speaker of the House of Representatives moved for a week in the United States, A country that has not seen many Atlético Tigre shirts in its history. Not to mention the one that says “Clinton” on the back.

Massa summed himself up as “the wines, the mates, the constitutions, the Tigre shirt and Argentina” Infobae, satisfied and relieved after a ride that left his companions as tired as they were happy. Thursday night ended very late, after three and a half hours of dinner with former President Bill Clinton. During his time in Washington and New York, Massa also met with senior representatives from the White House National Security Council (NSC), the State Department, the financial world, and the American Jewish community.

Oddly enough, and despite the fact that almost all of these people repeatedly talk about the International Monetary Fund (IMF), loan surcharges, the new Special Drawing Rights (SDR) destination and the need for a Washington-based body to propose “canning” and ” modifying its attitude towards Argentina, Massa’s agenda did not include any meeting with representatives of the International Monetary Fund.

Do you talk all the time about the International Monetary Fund and you haven’t talked to anyone in the fund? Massa made a poker face when asked. He only said that he held “public and non-public meetings” this week in the United States.

Something that could have something to do with the warm congratulations President Alberto Fernandez has repeatedly sent to the leader of the Renewal Front on the “hotline” they have kept on WhatsApp all the time this week. “Sparkling, radiant, radiant,” said the chief to Massa.

But the hottest phone was the phone of the Minister of Economy Martín Guzmán, to whom Massa asked for all kinds of technical details “so as not to spoil”. Basic precautions, especially if you have meetings with staff from the International Monetary Fund. Massa, who is especially interested in his relationship with the United States, admitted: “I drove Martin crazy, asking him for a lot of details.”

Thus, “neither Yankees nor Marxists, Peronists” has a somewhat relative meaning for Massa whom Raúl Alfonsín wowed at the age of eleven by reciting the preamble to the Constitution, in his teens he became enthusiastic about Alvaro Alsugaray’s UCeDé and at the age of eighteen he belonged to the Peronist – Graciela Camanyo.

Massa, who is well aware that the main aspects and very important issues of Argentine politics pass through the leading world power, analyzed: “From Braden or Peron, Argentina has something double in the relationship with the United States.”

Without a smooth relationship with that country’s power factors – and not just with its government – many things become much more difficult. Not to mention whether or not Argentina wants to rule from 2023. Vidal, who has already said yes, that he wants to receive the presidential baton from Fernandez on December 10 of that year, has a deep conviction: if she is president, she will travel with the opposition of the United States to explain what the Argentine political class as a whole wants to do, not just the government. With the government alone that wouldn’t be enough, I understand.

And Masa? Do you want to be Fernandez’s successor? The question came to him in various ways during his US days, but as a good athlete he was able to divert attention to another sector of the field and get rid of the sticky mark of those pressing questions. Suggest another story: the new sparkler, the man who no longer takes a step in thinking about the next five.

“I’m going to confess something to you,” Massa told Michael Schifter, president of American Dialogue, this week. “For a long time my political career has been challenging. It has occurred to me that all the time more than enjoying my responsibility and my moment I have been thinking about what is to come. I suppose it is because of my own frustrations and mistakes that I have learned to do what I must do well and not think about tomorrow. The coalition has given me a new chance after my failure. elections in 2017. He said the same to President Fernandez in a “semi-intimate talk,” he said.

The State Department revealed on Tuesday, a day of multiple and important meetings for Massa Infobae His “disappointment” at Argentina’s abstention on the resolution submitted by the United States to the Organization of American States. Many other politicians had been affected by this coup in the midst of the seduction of various forces of the United States, but Massa is convinced that it does not affect the relationship between the two countries.

Speaker of the House of Representatives He prefers to emphasize his meetings with the American Jewish community, in which he explained the meaning of Argentina’s vote at the United Nations, when the Commission on Human Rights supported an investigation in Israel. Only the United States occupies so much interest in Massa’s international relations that in 2017 he traveled to Israel with his adviser on international affairs, Gustavo Martinez-Pandiani, and met then-leader of the Labor faction in the Knesset, Isaac Herzog. Four years later, Herzog is the new president of the State of Israel.

Sergio Massa during a meeting in Tel Aviv in 2017 with Isaac Herzog (white shirt), today’s President of Israel

Massa’s advisors assert that this is the harvest of the patient’s transplant, and he is able to convince almost any interlocutor: Argentina, because of its own history, always supports a human rights investigation, he also told local Jewish organizations at the three meetings that he was in Washington and New York, where he met the strong Rosen. This same principle, however, is not the one that has been applied with Nicaragua, where above all the profound rejection of Casa Rosada and Palacio San Martín of the Secretary-General of the Organization of American States, Luis Almagro, prevailed.

“You are all portfolio managers and you are savers,” Massa told his interlocutors during the meeting at the Argentine Consulate in New York on Friday. “I represent the country of Argentina. I will speak in Spanish,” he added.

The head of the Renewal Front is extremely careful when he talks about sensitive issues and that he is not one hundred percent in control. It was different Thursday night, which I spent speaking in English with Clinton at an Italian restaurant in suburban New York. He has also repeatedly appealed for some comments and words in this language in his many meetings since last Sunday. Not, however, when the issues are economic or hypersensitive.

On Sunday, Massa will already be in Argentina to return to the House of Representatives on Monday. He leaves “very happy” after his week in the US, in which he achieved more than he expected, especially in terms of “awareness” of Argentina’s problem with the IMF.

A few frantic days in which the Washington government’s disappointment with the vote in the OAS was not the issue that moved him the most. No, Massa’s most unexpected moment came on Tuesday night in the beautiful building of the Argentine Embassy in Washington.

The agenda saw a dinner with investors, but the cover of “Karas” magazine appeared on his mobile phone. Fernando Galmarini, Carlos Menem’s former sports minister, but in particular his father-in-law, is Moria Kazan’s new boyfriend. In the world of “fake news”, Massa wanted to make sure what he was reading was true, and that Moriah became a new member of the extended family. The confirmation came to him in the middle of dinner via Malina Galmarini, Fernando’s daughter and wife. This was not expected

Sergio Massa dined with Bill Clinton and explained Argentina’s strategy with the IMF
US “disappointed” with Argentina for abstaining in the OAS vote condemning Nicaragua
Human rights and magrophobia, stones in the shoes of the relationship between the United States and Argentina
Sergio Massa strengthened his ties with the Jewish community in the United States and concluded the day with dinner with Bill Clinton