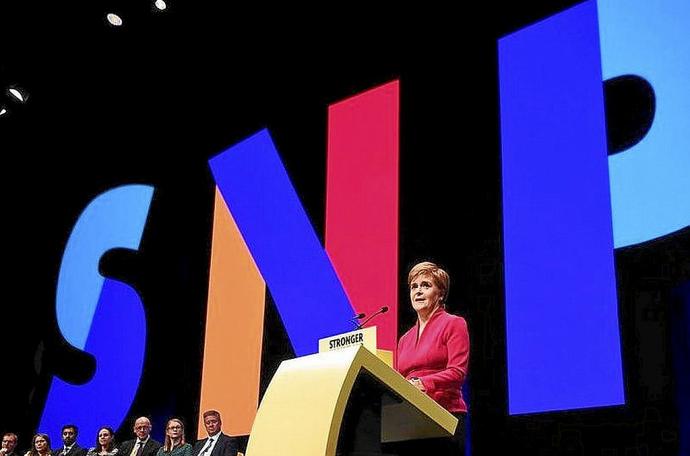 Scotland’s First Minister and leader of the Scottish National Party, Nicola Sturgeon, confirmed yesterday, at the conclusion of her party’s national conference, that she will seek an agreement with the British government for a new independence referendum, as his approach to policy is “cooperation rather than confrontation for as long as possible.”

Nationalist Sturgeon in her address appealed to the same spirit that made possible the alliance of the Government in Scotland with the Green Party and hoped that “in this spirit of cooperation the Scottish and British Governments can come to an agreement”, as it has been done. At the consultation held seven years ago, in 2014, so that “the voice of the Scottish community can be heard and respected”.

clear mandate The Scottish prime minister, who nearly wrapped up the first meeting of the Scottish National Party after winning regional elections in May, said the result gave her a “clear mandate to hold an independence referendum”. The national leader continued, addressing her colleagues, “Our victory in May represents an indisputable mandate to implement our proposed electoral program and this is what we will do.”

“We will give the people of Scotland the opportunity to elect independence,” he said, adding that his intention was to call a “legal referendum within this legislature – when the coronavirus allows it – before the end of 2023”.

The Scottish government, as announced in the House of Representatives last week, resumed work towards preparing for the consultation after the vast majority of the gunmen participating in the conference supported its plan, although it admitted that “no one denies that there will be challenges to overcome.” “Scotland must not jeopardize health, well-being and its economy by holding a referendum before it is safe to do so,” said the motion, which was backed by 535 votes at the SNP conference on Sunday, with just 10 against.

divided population Various opinion polls published during the celebration of the National Convention give a divided answer to the question of Scottish self-determination, with a slight advantage in favor of remaining in the UK.

In the first independence referendum, held in September 2014, 55% of Scots voted to remain in the United Kingdom, compared to 44% who supported independence. At the time, the United Kingdom was part of the European Union (EU) and one of the arguments for continuity was that Scotland would continue to belong to the community block, something that no longer happened.

new rules Boris Johnson’s government recently laid new groundwork for the virtual consultation that will take place, by requiring “at least 60% of the population to support the referendum for an extended period”, according to the British Minister for Scotland, Alistair Jack. , at the end of last August.

In any case, Sturgeon stressed that fighting the Covid pandemic is his priority at the moment. “My biggest responsibility is to lead the country through the biggest health crisis in a century.”

At the conclusion of the SNP conference Sturgeon also announced his goals to restore a “fair and green” Scotland from the pandemic. The leader of the Scottish National Formation explained that “our goal for 2030 is to generate all of our energy from renewable sources” and in 2050 “to decarbonize the entire energy system”.

On the way to this recovery and the transition to a green economy, the chancellor, Kate Forbes, has renewed the national government’s commitment to “invest £500m – €586.25m – in the next 10 years” to the north-eastern region of Scotland, whose economic activity is dependent on fuel fossil.