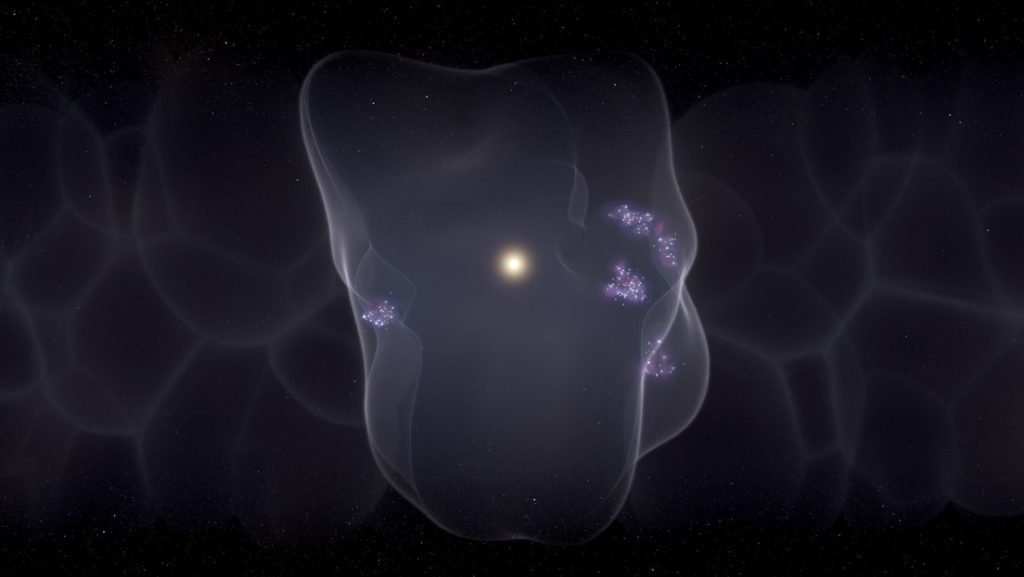 Reconstructed a group of astronomers The evolutionary history of our galaxy’s neighborhood, shows how a chain of events, starting 14 million years ago, led to the formation of a vast bubble responsible for the formation of all young stars close to Earth.

The team, led by scientists from the Harvard-Smithsonian Center for Astrophysics (CfA) and the Space Telescope Science Institute (STScI), created Vitality 3D space-time, which reveals that all young stars and star-forming regions – within 500 light-years of our planet – Found on the surface of a bubble about 1,000 light-years in diameter, known as the “domestic bubble”.

“For the first time we can explain how nearby stars began to form,” claimed This Tuesday in a statement by Catherine Zucker one of the study authors, published in Nature magazine.

What is known about the local bubble?

The model, which is based on a new data set from the European Space Agency’s Gaia space observatory, shows how a series of supernovae, which It first erupted 14 million years ago, the interstellar gas was pushed outward, forming a bubble-like structure with a surface ripe for star formation.

Currently, there are seven known star-forming regions or molecular clouds (dense regions in space where stars can form) on the bubble’s surface. “We figured it out About 15 supernovae exploded over millions of years “To form the domestic bubble we see today,” Zucker said.

According to astronomers, this strangely shaped bubble, which was discovered in the 70s and 80s of the last century, is not dormant and continues to grow slowly. “It moves about 6 kilometers per second“But it lost most of its momentum and stabilized in terms of speed,” the researcher explained.

Joao Alves, a professor at the University of Vienna and co-author of the study, noted that “when the first supernova that created the local bubble exploded, Our sun was far from the event“But about 5 million years ago, the Sun’s path took it through the galaxy inside the bubble, and now the Sun is, fortunately, almost at the center of the bubble,” he added.

The team said it had suspected for nearly 50 years that super bubbles are ubiquitous in the Milky Way. “Now we have a guideAnd what are the odds that we’re in the middle of one of these things? Asked Alyssa Goodman, Harvard University professor and CfA scientist. Statistically, it is very unlikely that the Sun would be centered in a giant bubble if such bubbles were rare in our Milky Way, he stressed.

As the researcher explained, Our galaxy is like Swiss cheese with many holes, as these holes are blown away by supernovae, and new stars can form in the cheese around the holes left by dying stars.

Next, astronomers plan Map of more interstellar bubbles For a full 3D view of their locations, shapes, and sizes. Tracing the bubbles and their relationship will allow us to understand the role of dying stars in the birth of new bubbles and in the structure and evolution of galaxies such as the Milky Way. Where do these bubbles meet? How do they interact with each other? How do supernovae lead to the birth of stars like our sun in the Milky Way? These are the questions the team hopes to answer.

See also  Wimbledon charts its stages with and without fans