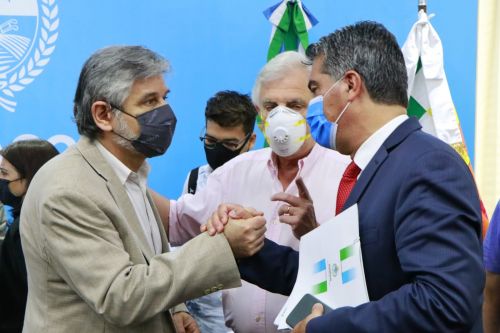 14 entries will be incorporated into the profession of scientific and technological researcher at CONICET, and 20 post-doctoral scholarships and 10 doctoral scholarships will be awarded. In addition, the nation and province will work on the integrative regional agenda for science, technology and innovation in Chaco.

On Monday, Governor Jorge Kapetanic and Minister of Science, Technology and Innovation of the Nation Daniel Filmos signed the Chaco Special Project Agreement that seeks to enhance scientific and technological capabilities in the province’s strategic thematic areas. In addition, they signed a letter of intent to work on the regional integrative agenda for science, technology and innovation (ATI-CTI) for the province, under the National Science, Technology and Innovation 2030 Plan.

The agreement provides for the funding of 14 admissions to the profession of scientific and technological researcher at CONICET (CIC), 20 post-doctoral scholarships and 10 doctoral scholarships co-funded by the government at the CONICET-UNNE and CONICET-UNCAUS dual accreditation institutes. As well as in academic, research and service units and in pilot stations of departmental units such as INTA (pilot stations in Saénz Peña, Las Breñas and Colonia Benítez), the Institute of Regional Medicine (IMR at UNNE), the Quitex Laboratory at the National Technological University, the College of Regional Resistance and the UNCAUS School of Government and Business.

Chaco is one of the four provinces that are part of CONICET’s special projects along with Catamarca, La Pampa and San Juan. The initiative includes a budget commitment of approximately $36 million annually, co-funded by the province and CONICET. The goal of the program is the federalization of CONICET, which, like many organizations, has a concentration of scholarship holders in the center of the country, while in northern and southern Argentina, the numbers are significantly reduced.

Chaco has 3.8 CONICET researchers per 100,000 inhabitants, while Buenos Aires and Misiones average 6 researchers per 100,000 inhabitants. “The Chaco has always been disadvantaged in allocating resources to scientific and technological research, there is a profound asymmetry in this comparison and we are working together to fix it,” said Kapitanic, accompanied by Deputy Governor Analia Rush Kiruga.

For this, the peculiarity of the national program is that each province determines the central thematic areas that must be funded. “By agreement, we are working to strengthen the scientific and technological capabilities of Chaco’s strategic issues,” the governor said.

Along these lines, he highlighted important research centers in the county, such as the Biotechnology Center that operates on the grounds of a horticultural school. Likewise, he indicated that it is necessary to move forward with the establishment of the Chaco Institute for Science, Technology and Innovation, a self-sustaining body operating in its own building and awaiting approval in the House of Representatives.

The event was attended by CONICET President Anna Maria Franchi. CONICET Nordeste Director, Marisa Sensabella; Minister of Education of Chaco Aldo Lineras; Speaker of the House of Representatives Hugo Sakr. Representatives of universities and research centers that are held in the governorate also attended.

Science in the service of society

Minister Filmus noted that the goal should always be to put science to the solution of the concrete demands of society. This means dealing with issues related to health, production processes and social problems such as poverty. “We are in a position to fund growth and support the province in establishing the Chaco Institute for Science, Technology and Innovation. We are in a position to have state policies that are not tied to electoral calendars,” he noted.

In this way, the official considered it necessary not to raise scientific demands from the nation, but to discuss them in each province to find out what priorities the resources should be placed in, and how they should be done to improve the quantity and quality of the researchers present.

“We are determined to change the production model of the country, as the production matrix on which Argentina was based mainly on primary production shows cyclical exhaustion, and shows that sooner or later we enter a crisis and depletion of production processes. It is therefore necessary to apply more science and technology, as well as to generate greater productivity and competitiveness. in the economy.

The signed letter of intent seeks to develop the regional integrated science, technology and innovation agenda (ATI-CTI) for the province, which is an instrument of the National 2030 Agenda. The aim is to encourage intervention in a manner consistent with territorial boundaries the specificities of each subnational jurisdiction, its capabilities and potential to innovation. Likewise, they provide an organizational component to enhance planning according to established deadlines for achieving results in the short, medium and long term (2023-2030), given that they are flexible and adaptable agendas to new priorities. Enable periodic review.

CONICET Director Censabella appreciated the organization’s federalization process, and Chaco’s special project that gives the county the ability to determine which strategic issues will be funded. “It is a great step, which ultimately determines the social demand for science and that it is no longer a place for professionals to read each other, but rather a science that goes to serve the community,” he said.

Minister Lineras celebrated the initiatives and emphasized that it is a historic moment for Chaco as it faces, in a clear and tangible way, the possibility of developing research missions with a privileged object such as CONICET. “We are committed to making every effort so that the investigation function can be aligned with a mission of recognized quality in Argentina,” he added.