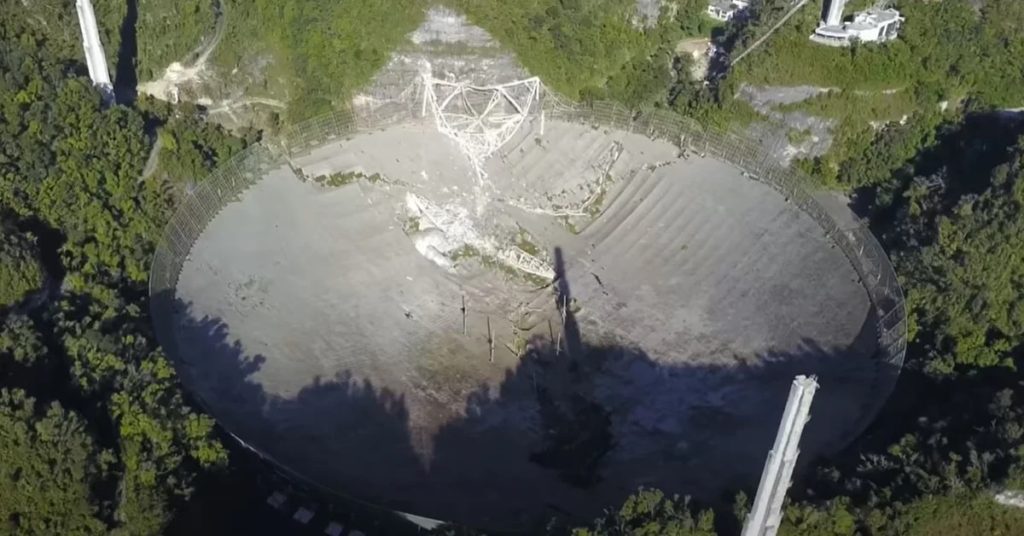 01-12-2021 A year has passed since the collapse of the Arecibo Radio Telescope. December 1st marks a year since the 900-tonne 305-meter radio telescope platform at Arecibo Observatory in Puerto Rico collapsed. Research and Technology Policy YOUTUBE / DAS DRONES PÉREZ

In August 2020, the already famous observatory suffered a broken cable that was part of the radio telescope’s supporting structure. Another cable broke on November 8, damaging the others and the inverter board itself.

Thus, on November 19, the National Science Foundation announced that the radio telescope would be dismantled for security reasons. On December 1, the collapse of the instrumentation platform and its impact on the massive inverter panel prematurely destroyed the installation.

Built within a natural depression in the interior of Puerto Rico, this radio telescope was opened in 1963, after three years of construction. In addition to tracking near-Earth objects, Arecibo allowed discoveries such as that Mercury’s orbital period was 59 days and not 88 as previously thought, a discovery dating back to 1964. In August 1989, the observatory captured an image of an asteroid for the first time in history: the asteroid ( 4769) Castalia. The following year, Polish astronomer Aleksander Woolcchan discovered pulsar PSR B1257 + 12, which later led him to discover the two planets of its orbit. These were the first extrasolar planets discovered, Wikipedia reports.

In 1974, a message was sent to other worlds: 1,679 qubits were sent from the radio telescope to the globular cluster M13, which is 25,000 light-years away. The 1 and 0 form of the Arecibo message defines a 23 x 73 pixel bitmap that includes numbers, people drawn, chemical formulas, and a telescope image.

After the collapse, more than 100,000 signatures supported a petition to the White House to rebuild the radio telescope.