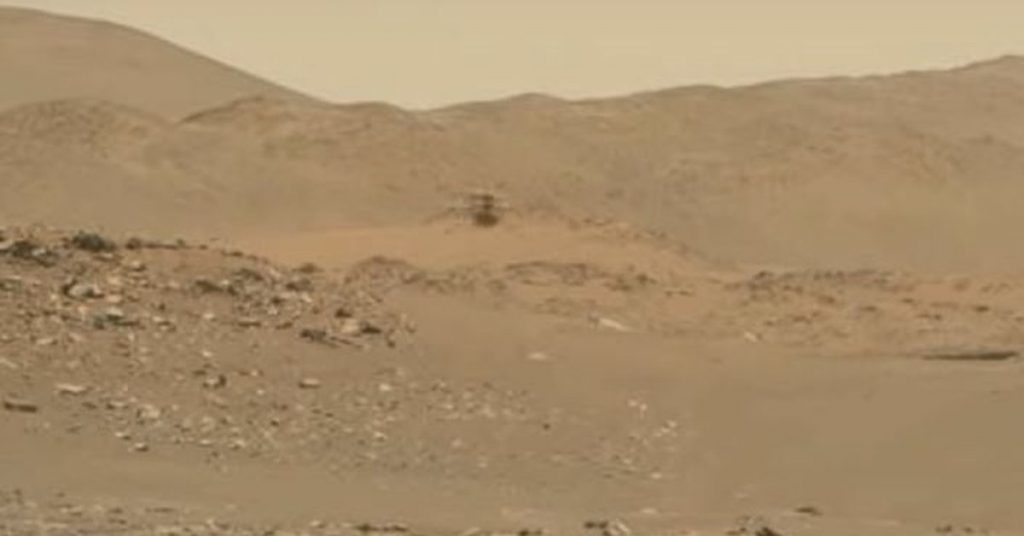 Recently downloaded images from the September flight of the Perseverance rover on Mars have allowed to produce a video of an Ingenuity helicopter operating near the faults.

Video footage of the Ingenuity helicopter’s 13th flight on September 4 provides the most detailed view yet of the helicopter in action, according to NASA.

Ingenuity is currently preparing for its 16th flight, scheduled for no later than Saturday 20 November, but the 160.5-second flight 13 stands out as one of Ingenuity’s toughest.

It involved flying over various terrains within the “Séítah” geological feature and photographing the outcrop from multiple angles for the probe team. The images, obtained at a height of 8 meters, complement those collected during Flight 12, providing valuable information for persistence scientists and vehicle drivers.

Video from Flight 13 (https://www.youtube.com/watch?v=qpqhYEkudvw), captured by the Mastcam-Z mobile camera, shows most of the 1.8kg helicopter’s flight profile. A second video (https://www.youtube.com/watch?v=40FkAA62uNg) provides a close-up shot of the take-off and landing, which was obtained as part of a scientific observation to measure the helicopter’s dust plumes.

“The value of Mastcam-Z really shines through in these videos,” Justin Mackie, deputy principal investigator for the Mastcam-Z instrument at NASA’s Jet Propulsion Laboratory (JPL), said in a statement. Even at 300 metres, we get a great close-up shot of takeoff and landing with the Mastcam-Z’s “right eye.” And while the helicopter is little more than a point in the wide view captured through the “left eye,” “spectators are a good idea.” about the scale of the environment that creativity explores.”

During takeoff, Ingenuity raises a small plume of dust captured by the right camera, or “eye,” by moving to the right of the helicopter during ascent. After its initial ascent to its maximum planned height of 8 metres, the helicopter makes a small rotation to align its color camera for exploration. The creativity then tilts, allowing the rotors’ thrust to begin to move them horizontally through the thin Martian air before exiting the screen. Later, the helicopter returned and landed near its take-off place. The team targeted a different landing site, about 12 meters from take-off, to avoid ripples of sand on which they landed upon completion of Flight 12.

Although the view from the Mastcam-Z’s left eye shows less of the helicopter and more of Mars from the right, the wide angle gives a glimpse into the unique way the Ingenuity team programmed the flight to ensure success.

“We took off from the crater and flew over a high ridge before diving into Situ,” said Ingenuity Pilot President Havard Grip of the Jet Propulsion Laboratory. “Because the helicopter’s navigation filter favors flat terrain, we programmed a trajectory point near the ridge line, where the helicopter would slow down and drift for a moment. Our flight simulation indicated that this small ‘rest’ would help the helicopter stay on course despite important terrain differences. It’s doing the same thing way back. It’s amazing being able to see this happen, and it enhances the accuracy of our modeling and our understanding of how to better work with creativity.”

The wide angle view also shows how creativity maintains altitude while in flight. After the initial ascent to 8 metres, the helicopter’s laser altimeter notes a change in the altitude of the terrain below as it heads northeast toward the ridge line. Creativity adjusts automatically, ascends slightly as it approaches the hills, and then lowers to stay 8 meters above the undulating surface. Once it flies to the right, out of sight, Ingenuity collects 10 images of the outcrop with its color camera before returning to the frame and landing again at the target location.

After Flight 13, Ingenuity went silent in October, along with other NASA’s Mars spacecraft during the solar conjunction of Mars, when the Red Planet and Earth are on either side of the Sun, blocking most communications. After pairing, Ingenuity conducted a short test flight before embarking on Flight 15, which began a multi-flight voyage back to the vicinity of Wright Brothers Field, their starting point in April.