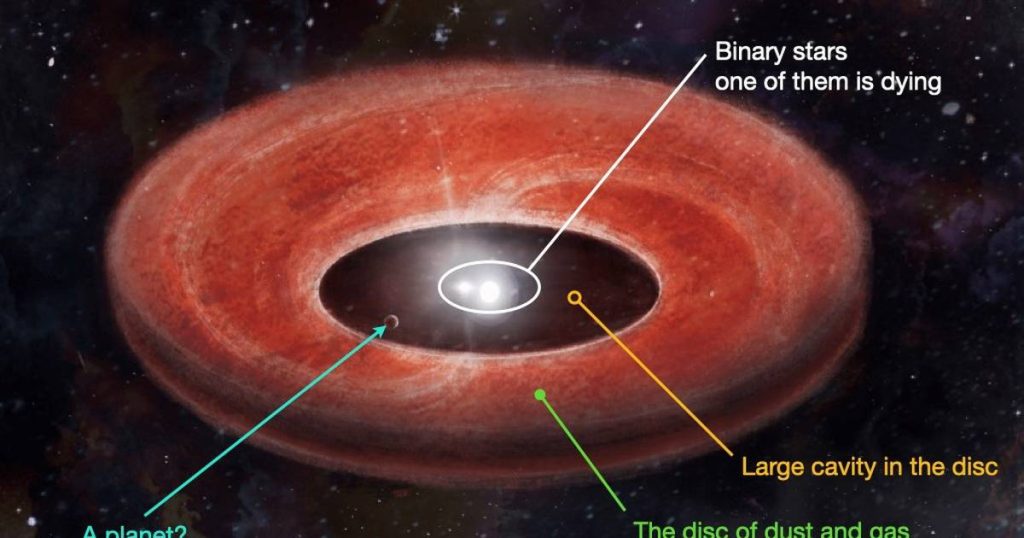 Even if they were about to die, it was possible that some types of stars could still form planets. If this is confirmed, it will be necessary to modify theories about the formation of planets.

In the case of binary stars, the gravitational pull of the second star causes the material ejected by the dying star to form to form a flat rotating disk. Also, this disk is very similar to the protoplanetary disks that astronomers observe around young stars in other parts of the Milky Way.

An international team of astronomers led by researchers at KU Leuven has discovered that disks of this type surrounding so-called advanced binary stars show signs that could indicate planet formation.

Moreover, their observations show that this is the case for about one in ten of these binary stars.

“In the ten percent of the disk-evolving binary stars that we studied, we see a large cavity (emptiness/hole) in the disk,” says Jacques Kluska, an astronomer at KU Leuven, first author of the research paper in Astronomy & Science. Where the discovery is described. “This is an indication that something is floating in there causing all the material to build up in the cavity area.”

Cleaning the material in this cavity could be the work of a planet. This planet may not have formed at the beginning of a binary star’s life, but rather at the end. In addition, astronomers have found more solid evidence of the existence of such planets. “In advanced binary stars with a large cavity in the disk, we saw that heavy elements such as iron were very rare on the surface of the dying star,” Kluska says in a statement.

See also  Science. Keys to the solar system in the region of nearby star formation

“This observation leads to the suspicion that dust particles rich in these elements have been trapped by a planet.” By the way, the astronomer does not exclude the possibility that in this way several planets will form around these binary stars.

The discovery was made while astronomers were inventorying advanced binary stars in our Milky Way. They did so based on existing and publicly available observations. Kluska and her colleagues counted 85 of these binary star pairs. In ten pairs, the researchers found a disk with a large cavity in the infrared images.

If new observations confirm the existence of planets around advanced binary stars, and if it turns out that planets formed only after one of the stars reached the end of its life, then theories about planet formation will need to be modified. “Confirming or refuting this extraordinary method of planet formation would be an unprecedented test of current theories,” according to Professor Hans van Winkle, Director of the KU Leuven Institute for Astronomy.