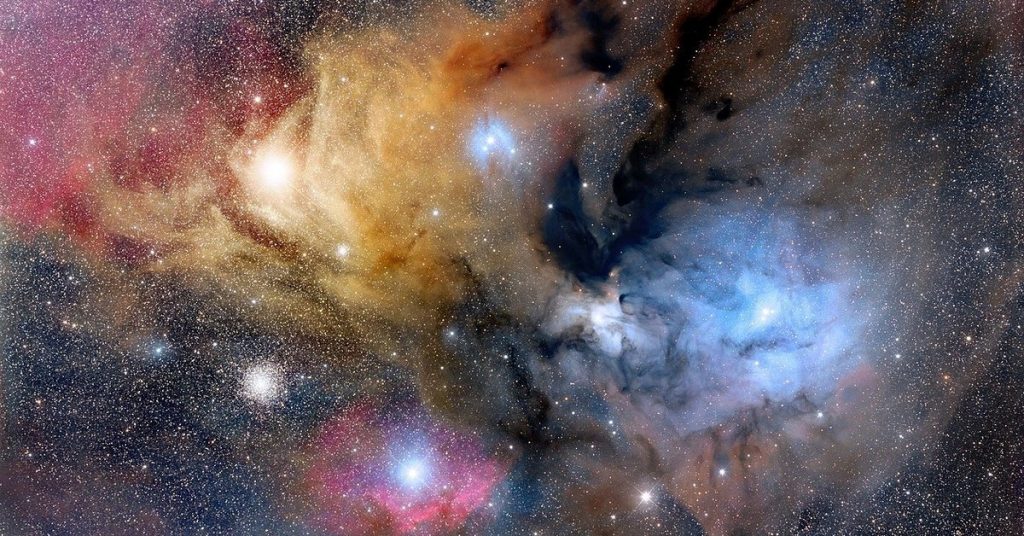 The active star-forming region in the constellation Ophiuchus is providing astronomers with new insights into the conditions in which our solar system arose.

Specifically, a new study of the Ophiuchus star-forming compound shows how our solar system was able to enrich itself with short-lived radioactive elements.

Evidence for this enrichment process has existed since the 1970s, when scientists who studied certain metallic impurities in meteorites concluded that they were pure remnants of the nascent solar system and contained the decay products of short-lived radionuclides.

These radioactive elements could have been thrown into the nascent solar system by the explosion of a nearby star (a supernova) or by strong stellar winds from a type of massive star known as a Wolf-Rayet star.

The authors of the new study, published in Nature Astronomy, used multi-wavelength observations of the Ophiuchus star-forming region, including fascinating new infrared data, to reveal interactions between gas-forming clouds. . Their findings suggest that stellar cluster supernovae are the most likely source of short-lived radionuclides in star-forming clouds.

“It is likely that our solar system formed in a giant molecular cloud next to a young star cluster, and that one or more supernovae of some of the massive stars in this cluster polluted the gas that became the Sun and its planetary system,” says co-author Douglas N. C. Lin, Professor Emeritus of Astronomy and Astrophysics at the University of California.

“Although this scenario has already been proposed in the past, the strength of this work lies in the use of multi-wavelength observations and complex statistical analysis to derive a quantitative measure of model probability,” he adds.

First author John Forbes of the Flatiron Institute’s Center for Computational Astrophysics notes that data from space-based gamma-ray telescopes allow detection of gamma rays emitted by the short-lived aluminum-26 radionuclide. “These are difficult observations,” he adds. “We can only detect them convincingly in two star-forming regions, and the best data comes from the Ophiuchus complex.”

The Ophiuchus cloud complex contains many dense proto cores at various stages of star formation and protoplanetary disk evolution, which represent the early stages of planetary system formation. By combining image data at wavelengths ranging from millimeters to gamma rays, the researchers were able to visualize the flux of aluminum-26 from the nearby star cluster into the Ophiuchus star-forming region.

Forbes adds: “The enrichment process we’re seeing in Ophiuchus is consistent with what happened during the formation of the solar system 5,000 million years ago. Once we saw this beautiful example of how the process happened, we started trying to model the nearby star cluster that produced the radionuclides we see today in gamma rays. “.

Forbes has developed a model that explains every massive star that could exist in this region, including its mass, age, and probability of exploding as a supernova, and includes potential aluminum 26 returns from stellar winds and supernovae. The model allowed him to determine the probabilities of different scenarios for the observed aluminum-26 production.

This kind of statistical analysis assigns probabilities to scenarios that astronomers have been discussing for the past 50 years, Lynn says. “This is the new direction of astronomy, identify the possibilities,” he adds.

The new discoveries also show that the amount of short-lived radionuclides incorporated into star-forming systems can vary greatly.

“Many new star systems will be born with an abundance of aluminum-26 in line with our solar system, but the difference is enormous: many times in size – he asserts -. This is important for the early evolution of planetary systems, since aluminum-26 is the main source of early warming. More than aluminum-26 probably means drier planets.”

Co-author João Alves of the University of Vienna obtained infrared data, which allowed the team to delve deeper into the core of a star-forming complex through dusty clouds, as part of the European Southern Observatory’s VISION study of nearby star nurseries. Using the VISTA telescope in Chile.

Alves said, “There is nothing special about Ophiuchus as a star-forming region. It is simply a typical formation of gas and young, massive stars, so our results should be representative of the enrichment of short-lived radioactive elements in the composition. . of stars and planets throughout the Milky Way.” .