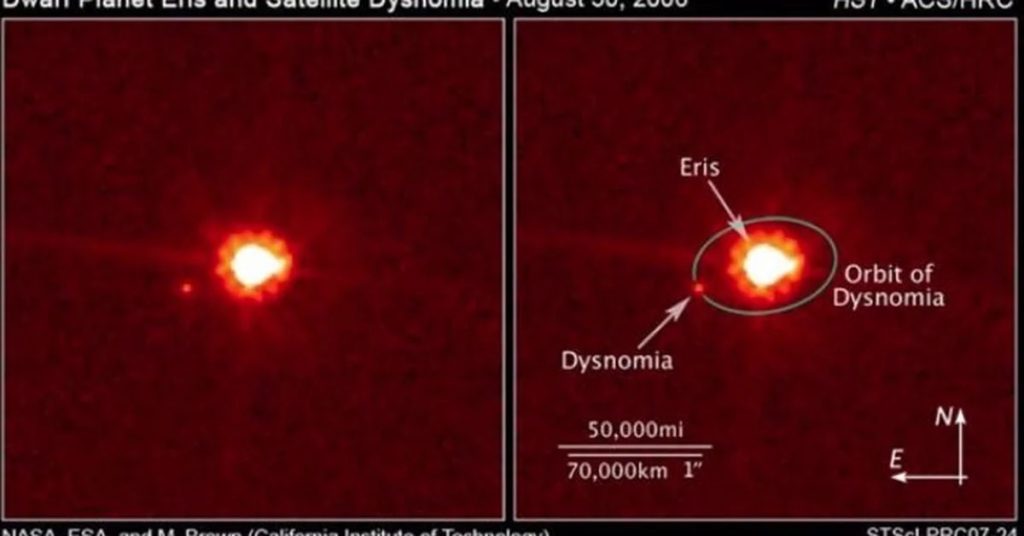 January 5th this year marks the 17th anniversary of the confirmation in 2005 of the discovery of Eris, first observed two years ago, and presented as a possible tenth planet in the solar system.

At first, Eris appeared to be larger than Pluto, a discovery that sparked controversy in the scientific community and eventually led to the International Astronomical Union’s decision in 2006 to clarify the definition of a planet.

Recent observations indicate that Eris may in fact be slightly smaller than Pluto. Pluto, Eris, and other similar things are now classified as dwarf planets. They are also called plutoids in honor of Pluto’s special place in our history.

Eris was first seen in 2003 during the Palomar Observatory’s study of the outer solar system. It was discovered by Mike Brown, professor of planetary astronomy at the California Institute of Technology. Chad Trujillo of Gemini Observatory; and David Rabinowitz of Yale University.

The icy dwarf planet Eris takes 557 Earth years to complete one revolution around our sun. The plane of Eris’ orbit lies outside the plane of the planets of the Solar System and extends beyond the Kuiper Belt, a region of icy debris outside the orbit of Neptune.

This dwarf planet is often so far from the Sun that its atmosphere collapses and freezes at the surface like icy enamel. This coating shines brightly and reflects as much sunlight as freshly fallen snow. Scientists believe that surface temperatures range from -217 to -243 degrees Celsius. The thinner atmosphere will melt within a few hundred years as Eris approaches the sun, exposing a rocky surface that scientists believe looks similar to Pluto.

Because Eris is too small to be seen clearly, scientists used his small moon Dysnomia to measure it. Dysnomia has a nearly circular orbit that lasts for about 16 days. All asteroids in the asteroid belt can easily be placed inside Eris. However, Eris, like Pluto, is still smaller than Earth’s moon.

Originally named 2003 UB313 (and dubbed TV warrior Xena by her discovery team), Eris is named after the ancient Greek goddess of discord and strife. The name is explained because Eris is still at the center of a scientific debate over the definition of a planet.