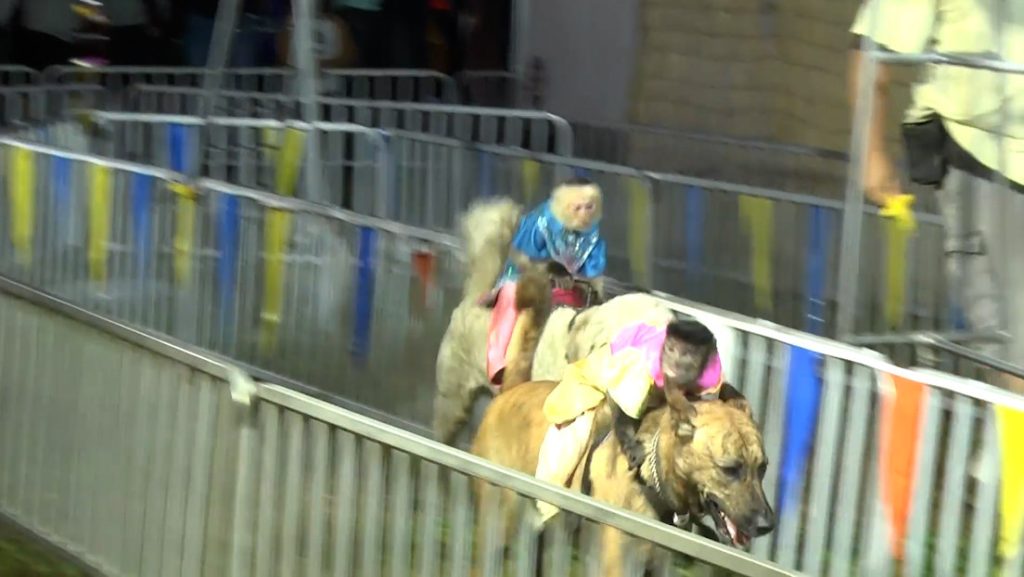 PETA called the show illegal and sent a letter to local authorities requesting its immediate cancellation.

A display at a local fair in neighboring Miami that featured monkeys riding dogs has sparked outrage among US animal rights groups. they reported local media.

In a video circulating on social media, young capuchin monkeys dressed as jockeys can be seen riding on doggies while participating in a race called the ‘Banana Derby’ at the Broward County Fair in Margate. Although the attraction did indeed have an act of screwing up dogs, it was this exhibition of dogs and monkeys that caused outrage in many animal organizations.

One of them, PETA, called the show illegal and sent a letter to local authorities requesting that it be immediately cancelled. “It’s the 21st century, and tying frightened monkeys to the backs of dogs endangers animals and frightens anyone who knows and respects wildlife,” he said in a statement. release The organization’s Captive Animal Law Enforcement Director, Rachel Matthews. He noted, “PETA is calling on city leaders to stop this cruel spectacle and never again allow another shameful event involving animals like the ‘rodeo monkey’.”

In tune, local activist Susan Hargreaves said that capturing wild animals and forcing them to make shows for money at these times is “completely unforgivable,” while admitting she was “surprised” by the authorities’ authorization of the exhibition.

The response of the authorities and regulators

Facing the accusations and sparking outrage, Margate’s authorities said they only agreed to hold the exhibition, but not the participation of every individual vendor or show.

The city’s commissioner, Tommy Rosano, emphasized that “the city’s semantics were only to dictate event times and days.” “The [Agencia de Reurbanización Comunitaria de Margate] He added: “He is the one who agreed to use the property.” As for what is displayed in the exhibition, it depends on them. We were not responsible for it,” he said, noting that he was able to watch the controversial show, but did not see “any abuse” in it.

As for Banana Derby owner Philip Hendricks, who presented the show as “the only place you can see monkeys riding dogs in South Florida,” he said the primates participating in the show are “like family” for his sake. “These appalling and appalling accusations are not true. These animals are well looked after. They are part of our family. People should see for themselves,” he said.