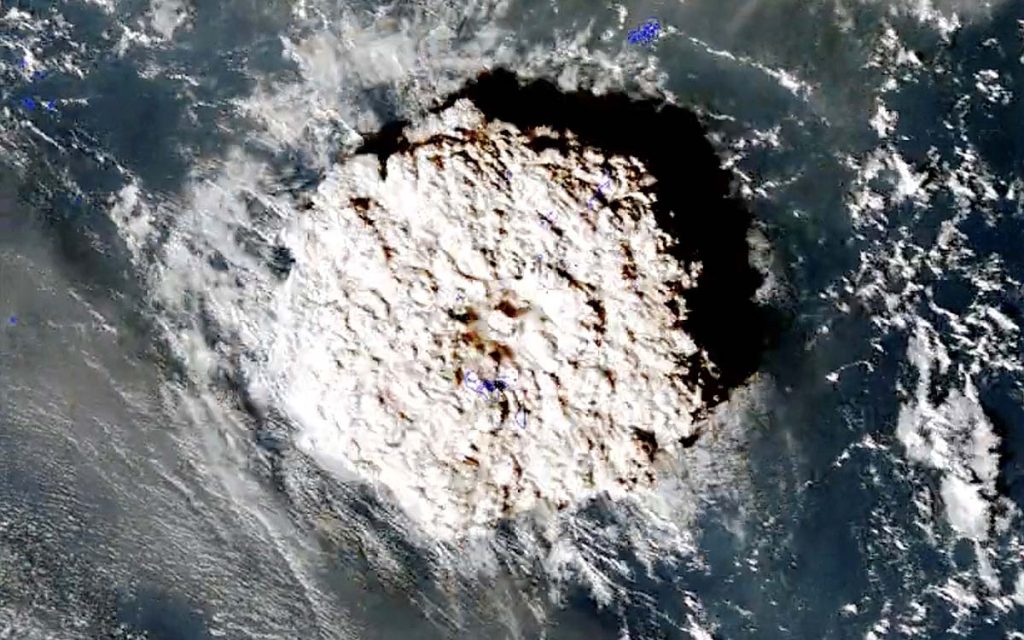 the Copernicus Sentinel 1 satellite, Led by the European Space Agency (ESA) and the European Union, the changes brought about by them have picked up The eruption of the Hunga Tonga volcano.

The images compare the area on January 3, with January 15, 12 hours after the eruption. With them, it can be seen The volcanic island has almost completely disappeared.

the The submarine volcano Hongga – Tonga – Hong Happi, which is located about 30 kilometers from the island of Fonuafo’ou in Tonga, first erupted on Friday 14 January. Later on January 15, it erupted again.

The volcano is located in the seismically active Pacific Ring, Smoke, gas and steam are generated in the air for a distance of 20 kilometers. His voice was heard about 2,300 kilometers away in New Zealand.

It may interest you: Satellite video captures huge underwater volcanic eruption in Tonga

moreover, It caused a tsunami in Hawaii, Japan, and Tongatapu, the largest island in Tonga, with waves flooding the capital and causing “significant” damage. In addition, a tsunami warning has been issued for several island nations in the South Pacific.

Satellite images show spreading shock waves and an ash cloud that fell from the sky in Nuku’alofa, the capital of Tonga, on Saturday.

🔴 Yesterday at 17:08 UTC, # Copernicus # ranger 1 The first photo was taken of #HungaTonga After the devastating explosion

The volcanic island was almost completely wiped out

⬇️ Comparison of Before (January 3) / After (Photo of January 15, about 12 hours after the explosion)# Tonga pic.twitter.com/KA98HTQCBz

At the same time, The United Nations Satellite Center (UNOSAT) has released a preliminary assessment of the impact of the disaster. The report also provides comparisons between before and after the eruption, captured by the Pleiades satellites, and Sentinel 2 and WorldView images.

This shows the area around the volcano that was destroyed, as well as the encroachment of water and structures. affected in Kolovo, Kolomoto, Tatakamotonga, Tongatapu, Bangai, Ueha and Momoa provinces.

Saturday’s eruption was so powerful that satellites captured not only huge ash clouds, but also air shock wave Which is emitted from the volcano at a speed approaching the speed of sound.

According to the center, this is most likely One of the largest volcanic eruptions recorded on the entire planet in more than 30 years.

It may interest you: Tonga’s capital suffers “significant” damage after powerful volcanic eruption

Experts said that the volcano, which last erupted in 2014, It was surging for about a month before the magma surgedAt a temperature as high as about a thousand degrees Celsius, it will meet seawater of 20 degrees on Saturday, causing an instant and massive explosion.

According to Raymond Kass, a professor of volcanology at Australia’s Monash University, when super-hot magma rose rapidly and It encountered cold sea water, as well as a huge amount of volcanic gases, which intensified the eruption.