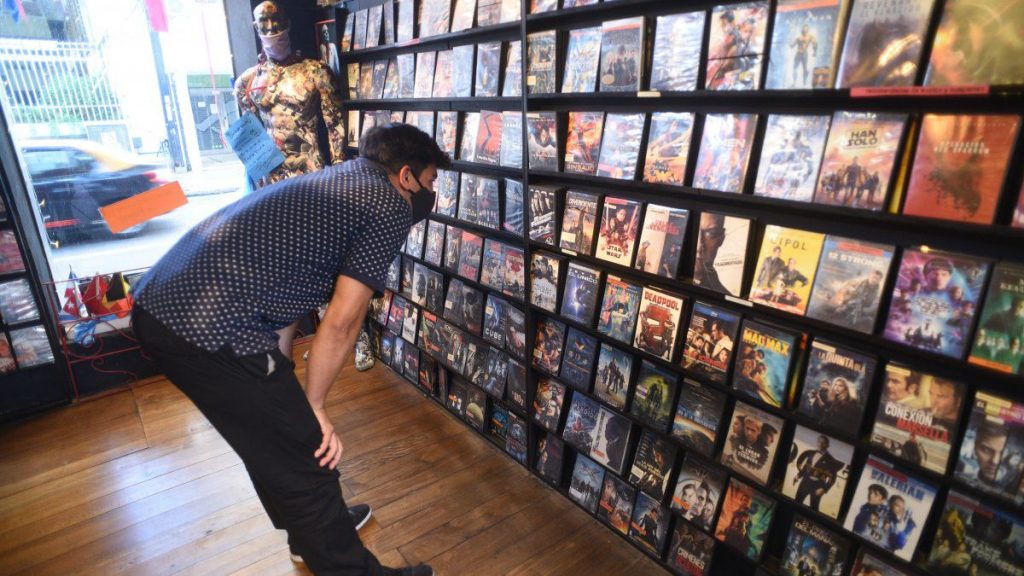 Silvia Bozzi owns a Premier Video Store (Santa Fe 1663), and opened her first store 36 years ago. He had five, and the one he remembers most fondly is the one next to the Open Pringles bar, in the mid-’90s, right in front of the plaza. “There were always people and we were open very late, very young and late at night, which was great,” says Silvia, a movie fan who decided to go into business who was tired of not watching movies on the weekends.

“In 1985 I was going to a video store in an apartment in Corta Ricciardone. They were all closed on Friday afternoon, and if you don’t remember, VHS ran out,” he recalls. This is why his badge was going to open on Saturday and Sunday nights. We started with 300 films and had to buy more. People took three videos, and they didn’t care what it was. There was always a queue,” he confirms, and points out In that golden age, they rented on the Sabbath what takes the day a month.

Little by little, everything was changing in the city. “Before you wouldn’t walk along the river. On Saturday afternoon, people went home, there were more movie theaters and everyone was enjoying the movies. If you haven’t gone to see the premiere, you’ll rent it.” The arrival of 2001 destroyed it. Download interruptions and piracy ended up making it where it is today. He laughs: “People think I don’t have it anymore.”

The Premier remains true to its traditional style. The place is a classic home, with wooden shelves and cozy. “Cinema is traditional. People who watch movies too. We’re weird. Few come, but they like attention.” We don’t have clients here, we have partners. There’s a round trip, we’re discussing. Many find a place to chat for a while,” he points out. During the pandemic, people are obsessed with movies. “Since we didn’t receive the first offers, we worked with the materials I had saved,” notes Sylvia, who has become Ten thousand titles, between DVD and Blu-ray.

Several employees worked but over time Bosie was left on her own, allowing her to stay open. There are loyal members who keep working and always a new member joins them. Offer promotions (wear 3 for 2 for 7 days), and align with social media. A catalog of everything for those looking for something specific. And he trusts his producer: “Film students come looking for what they can’t download. People are tired of Netflix saying movies look good and disappointed at the endbrag.

The most delicious food in the cinema

Another great survivor is Videoteca, which started in 1980. Fabian del Pozo worked there for 26 years. He got in as an employee and ended up owning it. for him, It is a region that has always suffered from “disproportionate competition” from cable television, networking, the Internet and piracy, and its cultural significance has not been recognized.. He compares the “disappearance of video stores to the fact that there are no other libraries”, while his site reaches 40,000 members. Yes, oddly enough, they are still incorporated today.

Technology is making great leaps, but Del Pozo assures they have always adapted and excelled to keep fighting. “We provide a unique and personalized service. Counseling is essential: no film is absolute. There are as many recommendations as the number of viewers‘,” he asserts, and is proud of a catalog of 25,000 titles, including some VHS that are no longer in digital form anywhere, not even on the web.

Previously, several thousand films were rented on Saturdays, today there are a few hundredSo profit margins have been reduced. That’s why they tried to compensate for the concept of “cinema shop” with products such as books, T-shirts, mugs or posters. Movie sales fell dramatically as people gave up the habit of buying and giving up.

Another diversification was the multi-purpose room in which they carried out cultural activities, which in the past year had to move to virtual, such as art exhibitions, trainings, workshops and performances. It also provides the digitization of analog materials, which has increased in the event of an epidemic. “The people at home had time to review, and they had no way of reproducing these old videos,” said the owner of the video library.

Many of Fabian’s clients “do not have the Internet and do not care about it, but they want to watch good movies.” In this sense, it states that “The platforms have a good show, but they don’t have everything. It’s a limited menu. The world of cinema is bigger.”, It is considered. The hard part of Videoteca, in addition to the rarity, is rated by directors, such as Stanley Kubrick, Woody Allen or Pedro Almodóvar, is material from film fans whose rentals have never been stopped.