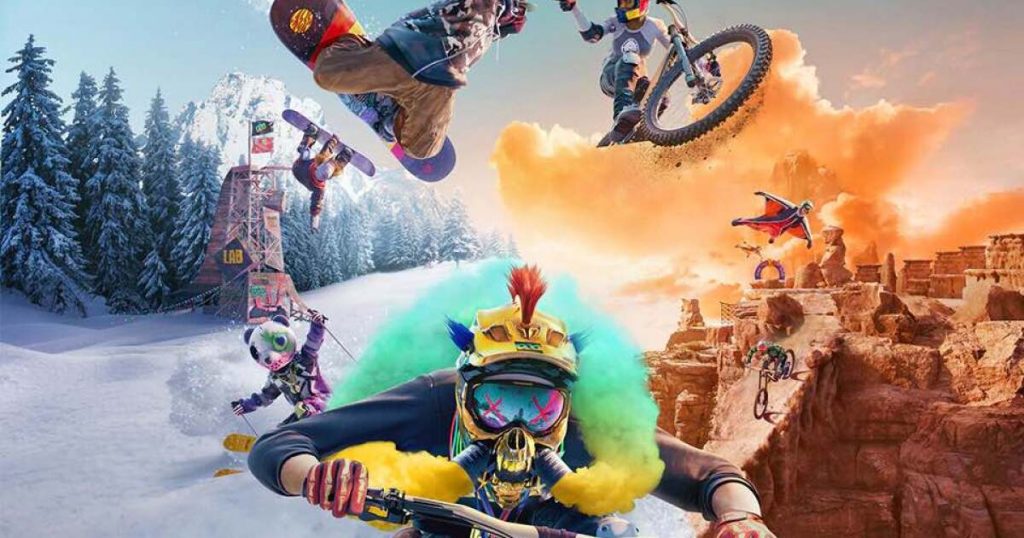 The first thing that catches your eye is the well-preserved landscape, inspired by national parks in the United States with geology recreated by GPS data, which is divided into 7 environments that go from jungle to snow, desert or mountains. According to its characteristics, you can participate in mountain bike, snowboard, ski, wing suit and ticket suit competitions, either for tricks, speed, checkpoints, etc.

In addition, this type of sports, which is distinguished by its amazing nature and pushes human boundaries, is well complemented by the licensing of franchises such as Red Bull, which is an emblem of today’s extreme sports.

The open world format with real players offers many possibilities to play. From the classic competition of 8 – 12 players vying for first place, to this new format called “Team Race” where you compete against 50 users at a time and add an element of “madness”

This game also makes use of cross play feature, you can fill very big games between all platforms – Xbox (One, Series S | X, PlayStation PS4, PS5 and PC) and use game types in a great way. , starting with the campaign format, 6 vs 6 tricks, 5 friends, or free for all. In addition, to better experience the landscape, there is a Zen mode, an offline format that is more meditative and relaxing.

Another success comes from the progressive gameplay that can be enjoyed by any type of player regardless of your level of experience. Because the format can be adjustable, from tricks and automatic landings to more detailed and specialized handling with combos in sticks and buttons for more experienced people. Even the open world allows you to practice tricks or speeds as you go through stages between competitions.

While it is refreshing to see a company like Ubisoft, with such a large deployment of efforts, both in development and in distribution and promotion in a game taking off from shooters, today there are challenges not only in the gameplay but also in the environment. Since, on the one hand, it competes against the free-to-play mainstream, which motivates many players in a simple way due to its game model, Riders Republic faces the cost of every purchase.

Since its inception, it has been announced that it will be supplemented by season formats with constant updates and customizations, very similar to what happens with other titles such as WatchDogs. Let’s just hope that this game-buying format as well as paying for customizations won’t be a limitation on increasing the size of the game that deserves space on our consoles.