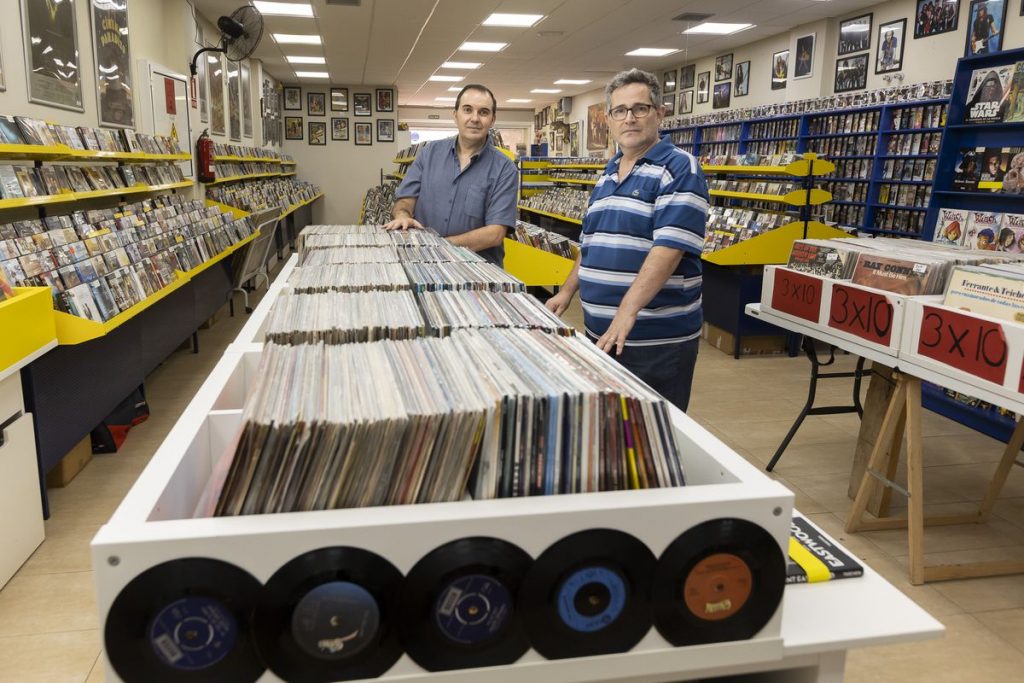 “I have pads for my kids, but I don’t see that because they just serve up trash and I don’t want them to know what my taste is.” Julian (pseudonym) babbles in the Classic Movies section of Back to the past, a store for buying and selling DVDs, Blue Rays, vinyls and collectibles in the center of Las Palmas de Gran Canaria. “Often I see the family watching something disgusting and I turn around, pick up the computer and go see a Cary Grant movie.”

This one-of-a-kind establishment in the capital is run by Enrique Asuncion, Victor Muniz and Jorge Sosa. The three have experience making films and music, and one day they decided that the boom of digital platforms threatened the physical form essential to compilation, and that it left a lot of cinema out of place because it wasn’t commercial. Enough and because it does not meet the needs of collectors. It is one of about three hundred video stores still active in Spain, according to sector data, that operate outside the iron fist of digital platforms, which, unlike what happened with these traditional companies, have only been growing during the pandemic.

They are part of a very weak but global resistance. Recently, daily The Wall Street Journal Initiative revealed Free Blockbuster A movement that began in 2019 allows Los Angeles citizens to borrow VHS movies for free using old street crates that used to sell newspapers. An association with physical form and distrust of the algorithm that also occurs in Spain.

“We want our children to continue our cinematic inclinations,” explains Asuncion, 48. “A lot of people come here not only to buy, but also to talk about cinema, buy portable software, buy posters. A lot of young people come to order classic or out-of-print films, or they order Pink Floyd or ELO vinyl because their parents taught them. It gives me hope and satisfaction. “. Back to the past is an exception. “Business is going well, really.”

“I can’t imagine myself working on anything else,” says Aurora DeParis, 45, owner of Instant videos in Barcelona, which is the oldest branch store in Spain having been active since 1977. Debaris does not have an in-house contracted stand. But he is not hostile against them. He explains in a phone conversation, “I have nothing against it, the more the culture improves, of course. The only thing is that there’s nothing I need to see because it’s going to contribute something to me, or because I need to see it and it’s not released on DVD or Blue Ray.”

You are running your business for more than just the excitement of continuing the family business. “I show 46,000 films, and many of them are not on platforms. I think I do protection and recommend these films. People show me every day.”

What do you think of the anti-algorithm? We work at a fixed rate where they can rent whatever they want for €8.95. We are cheaper than anyone else, and knowingly recommend.” The businesswoman expanded the business in 2008 in an effort to make it viable with a coffee shop, video store, and mini-cinema, where they planned to schedule a daily movie. At least before the pandemic. Everything went to hell. “. “I hope now that we are vaccinated and there is more control, my work and the work of biology, of all kinds, will be reinvigorated. It costs us.”

Business in the neighborhood is also a concern for Julián Bárcena, 37, owner Pointe Video Club, in Ryucin (8,400 inhabitants, Cantabria). “Don’t forget the lifetime stores, we’re the ones paying the taxes,” he says over the phone. “Every day we are lazy and lazy, we limit ourselves to seeing what the big corporations impose on us, and in the end we will all end up like the characters in the movie Wall-EIn this Pixar movie (2008), Earthlings leave the planet on a ship called Axiom Because of the pollution and the lack of passengers on their beds, they are obese and their legs do not work and are attached to a screen that meets all their needs. By the way, Barcena only contracted Movistar +. “But the basics: No cinematic choice, no soap operas or anything.”

The word algorithm appears in every conversation with video or movie store owners. For this, Lorena Jaume-Pallasi, CEO of AlgorithmWatch and a member of the Spanish government’s Group of Elders for Artificial Intelligence and Big Data, explains in a phone conversation from Germany, “Programming techniques are used based on Homophilia: Presumably, people with similar tastes want the same thing.” This theory has its roots in the 1950s and was developed to study the integration of cultures in the United States. “These simplified and reductive social theories were chosen by engineers for their application, because they are easy to program,” he says. “It is something much more complex than just the recommendations being made.” The result, a have a two Language imposed and a certain standardization in the tastes that permeate it. There is a very Anglo-Saxon point colonizer‘, a sentence or judgment on.

The unstable situation of many of these stores is due not only to the algorithm. says Bolivian Marcia Ciboro, owner of FictionAnd in Madrid. “It was very harmful, not only because of the booking itself, but also because of the fact that those who didn’t have a platform or wanted to have one pushed us to sign up for one. And we noticed that a lot.” Ciboro itself is one of those people, who has gone from having nothing to being forced to pay a monthly fee so they can see something. “The main reason you don’t want platforms is because you are bound to see what the company wants to see, and you have no autonomy: they surround you, lock your likes. Here I have 50,000 titles, neither Netflix nor HBO together makes it to my catalog.” At first, the business woman offered only authors’ cinema. “But I had to open my hand to stay alive.”

See also  Pique's tactic to be close to his children if Shakira moves to the US: player can sign with Inter Miami | people | entertainment

Ramon Pagan, owner of the R. Pagán video store in La Union (20,500 inhabitants, Murcia), is one of the naysayers of the platforms. “I’ve noticed the impact of the algorithm and Netflix since the pandemic,” he explains. “The algorithm is a platform-favorite bot that will advise you about good and bad horror movies just because you like horror. I can’t do that, because if I give you one Game Badly I lose credibility, and my business is based on the trust they trust in me.”

Maria Victoria is 35 years old. I just entered the local Back to the past And checks a shelf for updates. He explains: “For watching movies is the best cinema experience.” “And if not, I come here because there are more shows, and in addition, I see people and I can buy things. Last week I took a poster of orange orangeAnd he finished: “I go across the platforms. Especially because it is very expensive if you want to have a wide and good view.”

“Within the platforms, it’s the one that has the highest quality content, right now, even though they’re not producing, they have stuff that’s already there,” explains Aurora Depares.
Filmin is a Spanish company founded in 2007 that offers independent and commercial composed cinema in the form of video-on-demand and legally subscription. In 2020, investment funds Nazca and Seaya Ventures, shareholders in Cabify and Glovo, acquired 51% of the platform.