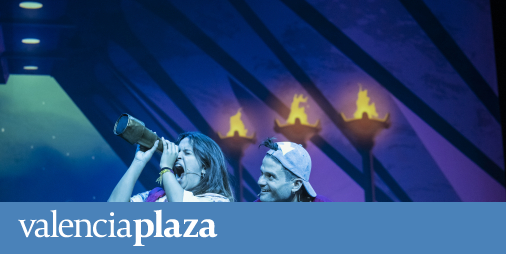 Valencia (Vice President). What will be the secret of the science museum? The new commitment of Ciutat de les Arts i les Ciències invites the audience to discover it to the beat of the music. From October 28, the Science Theatre, a space located within the Museu de les Ciències itself on the first floor, will host the musical Ramona y Cajal. Museum secret.

This original show, created exclusively for Ciutat de les Arts i les Ciències, is the work of Juan Luis Mira, who also directs, and has been prepared in collaboration with the MA in Applied Theater Arts from the University of Alicante, with John Sanderson, Academic Director of the said MA, responsible for production.

Songs, animation, and audio-visual effects stand out in this show that combines scientific publishing and musical theatre, narrating the great adventure of two young men, Ramona and Cajal, while spending a night at the Museum. During these hours they will meet major figures in the history of science, sing with Newton’s apple “The Rap of Universal Gravity”, and they will be surprised to hear Einstein himself sing about the secrets of space and time “in motion”.

The famous scientist of his famous equation, Darwin, explains what he really meant by natural selection, Stephen Hawking encourages life with humor rather than pain and concern for the planet. Other great characters will meet heroes to bring us closer to the science’s most relevant moments. Hypatia of Alexandria, actress Hedy Lamarr, who devised a defense system that was the basis of Wi-Fi and bluetooh, astrophysicist Vera Rubin, Rosalind Franklin or mathematician Maryam Mirzajani, featured prominently in the work.

The astronomy story told by the telescope, Newton’s own apple, or even Stephen Hawking’s wheelchair helps the two protagonists in their search.

The show is included in the Museu de les Ciències ticket and takes place at the Teatro de la Ciència. You can book a session at the information point on the first floor of the Museum (subject to availability).
Hours: Thursday and Sunday at 11:00 am and 12:30 pm, Saturdays at 4:00 pm and 5:30 pm. Monday, November 1 at 4:00 p.m.

Science Theater is a multidisciplinary space where scientific performances, performances, and representations are staged live. A versatile and innovative space for 120 spectators, it aims, through a “dramatic” format, to bring science closer to fun and rigor.

In addition to the work of Ramona y Cajal. The secret of the museum, in the Science Theater the visiting public can attend the scientific show “High Voltage” that explains the different concepts and curiosity of such an everyday and at the same time very amazing phenomenon. Here you can see, hear and even smell the electricity.

The ‘High Voltage’ show includes science demonstrations and fun experiments about electricity, such as the sound of bells without touching it, candles that go out with a metal rod without having to be blown, jump rings, electric arcs that traverse space, or tubes of neon lights that light up when Touch its ends. The audience responds to the questions put to them, is surprised by the correct answers and participates in some of these experiences that can even make their hair stand on end. They will also see in action the famous “Tesla coil”, a transducer with amazing effects, such as rays produced by more than one meter.