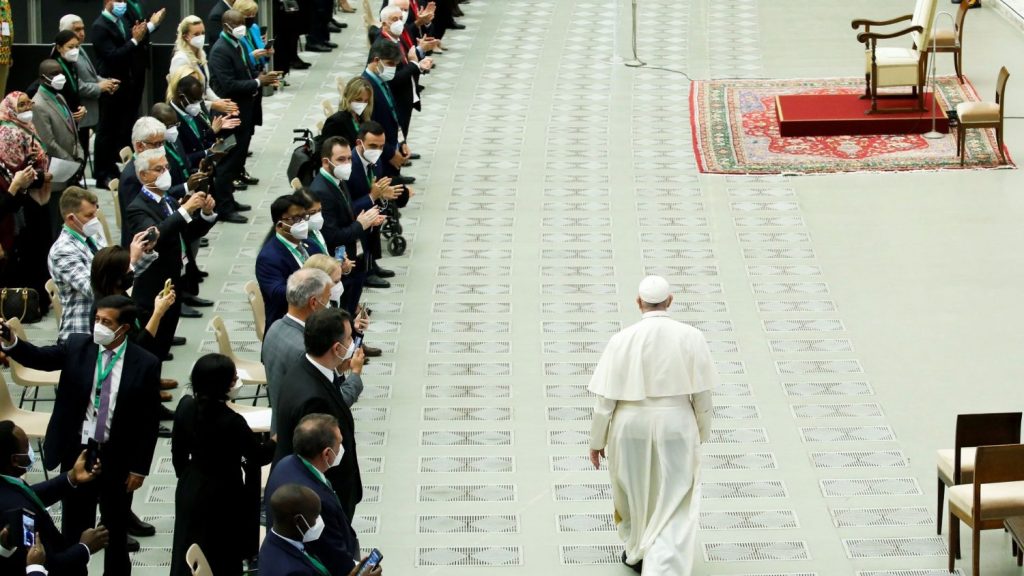 The Holy Father meets parliamentarians preparing for the UN Climate Summit COP26 in Glasgow and makes a strong appeal to the world’s politicians: “I ask you to strengthen action towards environmental and educational transformation with solidarity and responsibility and because we urgently need, wise and just laws.”

This afternoon, the Holy Father met the participants of the Inter-Parliamentary Meeting towards COP26 in the Paul IV Hall at the Vatican, after meeting on October 4 with various religious and scientific leaders where he signed a joint appeal for COP26. Today, Pope Francis reminds of this call to the politicians of the world and to all those called to occupy positions of great responsibility in the various spheres of society.

“On that occasion, motivated by a spirit of brotherhood, we were able to perceive a strong affinity of all the different voices in expressing two sides. On the one hand, the pain of the massive damage done to the human family and their common homes; on the other hand, the urgent need to embark on a change of course capable of Moving decisively and persuasively from the culture of disposal prevalent in our society to a culture of care” The Pope said.

The Pope explained that although it is a difficult and complex challenge, “humanity has the means to face this transformation, which requires a true internal transformation and a firm will to undertake it.” It requires it above all – he noted – “from those who have been called to positions of great responsibility in the various spheres of society”.

In his speech, Francis noted that in the joint appeal he signed, which he entrusted ideally when delivered to the presidents of the two houses of the Italian Parliament, “there are many obligations we intend to bear in the field of work and example, as well as in education”. Indeed, the Pope emphasized that we face an important educational challenge, because “every change needs an educational journey to mature a new global solidarity and a more welcoming community.”

Francisco put it plainly: “I ask governments to quickly adopt a course that limits the rise in average global temperature and promote courageous action, as well as strengthen international cooperation.” They are specifically asked to “promote the transition to clean energy; to adopt sustainable land-use practices that preserve forests and biodiversity; which promote food systems that respect the environment and local cultures; to continue to combat hunger and malnutrition; and which support sustainable lifestyles, consumption and production”.

The Pope explained that it is a transition towards a more inclusive and complete development model, based on solidarity and responsibility and in which everyone has a “role,” and that “the role of parliamentarians is particularly important, I would say that is crucial” underlined. In addition, he said, such “change of course” requires “great wisdom, foresight, and a sense of the common good, which are essential virtues of good politics.”

Finally, he wished that work in the lead-up to COP26 would be illuminated “by an important beacon: a beacon of responsibility and a beacon of solidarity” and for this – and he concluded – “we need urgent, wise and vital.” Just laws.

See also  The ship explodes in the port of Dubai