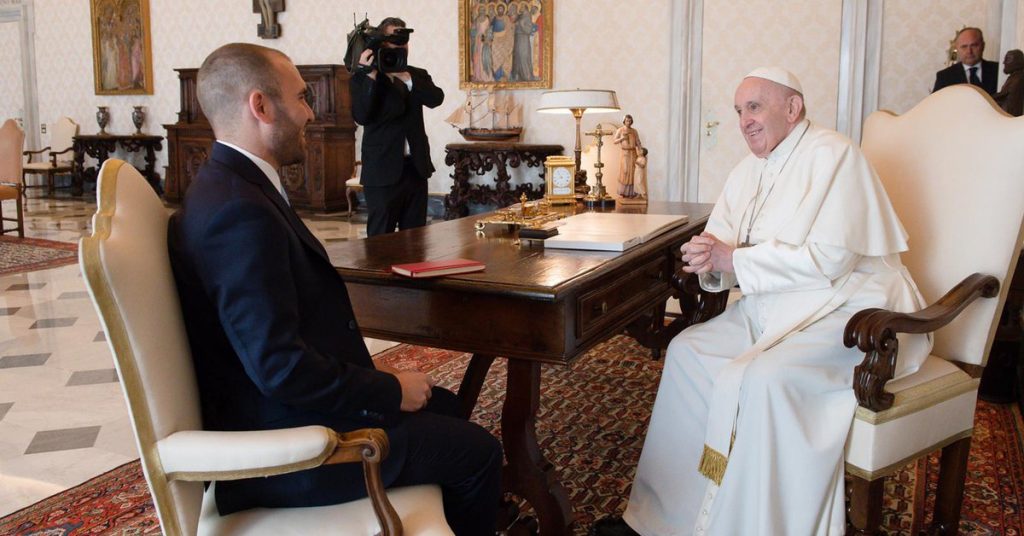 Pope Francis when he received in a private meeting the Minister of Economy, Martin Guzman, in the framework of his tour by several European countries to discuss the renegotiation of debt with the International Monetary Fund.

Pope Francis appointed the current Minister of Economy. Martin Maximiliano Guzman, a new member of the Pontifical Academy of Social Sciences, announced the Holy See today in a statement.

The Academy, founded by John Paul II in January 1994, is dedicated to promoting the study and progress of the social sciences, especially economics, sociology, law and political science.

So far this year, there are already two Argentines who have been selected by the Pope to join the said institution. On September 19, the Minister of Strategic Affairs, Gustavo Pelez, was appointed to this position.

Minister Guzmán, 39 years old and now an ordinary member of this Vatican entity, was born in La Plata on October 12, 1982, He received a BA in Economics from his hometown university and a PhD from Brown University in the United States.

He was chosen by the Pope “for his skills in the social sciences and for his moral integrity”, like the rest of the academics. It is a group of no less than 20 academics and no more than 40, which advises the Holy Father on the above matters.

Among the current academics are the Italian Prime Minister and former President of the European Central Bank Mario Draghi Chilean sociologist Pedro Morandi And the Argentine Marcelo Suarez Orozco.

The aim of the Foundation is to provide the Catholic Church with “the elements necessary to develop its social doctrine, and to reflect on its application in contemporary society.”

Guzmán’s appointment came at a time when the minister’s continuity within the government is linked to reaching an agreement with the fund, which also allows to avoid a new exchange crisis. Fiscal and monetary targets, as well as other assumed commitments for the coming years, will determine whether the government is able to narrow the exchange rate gap and gradually reduce inflation.

Martín Guzmán, Chosen One of the Supreme Pontiff

The background does not play to your advantage. The deal reached with bondholders was a real fiasco, only pushing maturities forward, but it failed to improve the financial climate, and the dollar didn’t calm down.. Now there is the same danger: that the agreement with the fund consists exclusively of pushing forward the problem of payments, without laying solid foundations for guiding a wire-bound economy.

While his administration resisted some difficult sections of Kirchnerism, Guzmán received an important gesture of support from the Pope At their last meeting in Rome, April 14who agreed With its efforts with the International Monetary Fund, in search of longer terms to repay the $ 45 billion debt granted by that organization to the country during the last months of the administration of Mauricio Macri.

In addition to his work as a minister, Guzmán is a research assistant at Columbia University, where he directs the debt restructuring program. He is a staff member of the Institute for New Economic Thinking. He is also an Assistant Professor at UBA and at the University of La Plata and directs the Journal of Globalization and Development.

Guzmán is a student of the Nobel Prize in Economics, Joseph Stiglitz (a favorite of Vice President Christina Kirchner and on good terms with Francisco), and since 2012 he has been studying the Stiglitz papers on macroeconomics and public debt. The American was always critical of the policy recommendations of the International Monetary Fund (IMF) and openly praised Christina Kirchner even in the worst moments of the 2011-2015 administration.

Martín Guzmán: “We need tax measures to prevent the rich from getting richer and the poor, getting poorer”
Martín Guzmán plays a silver bullet to avoid a dangerous scramble for dollars