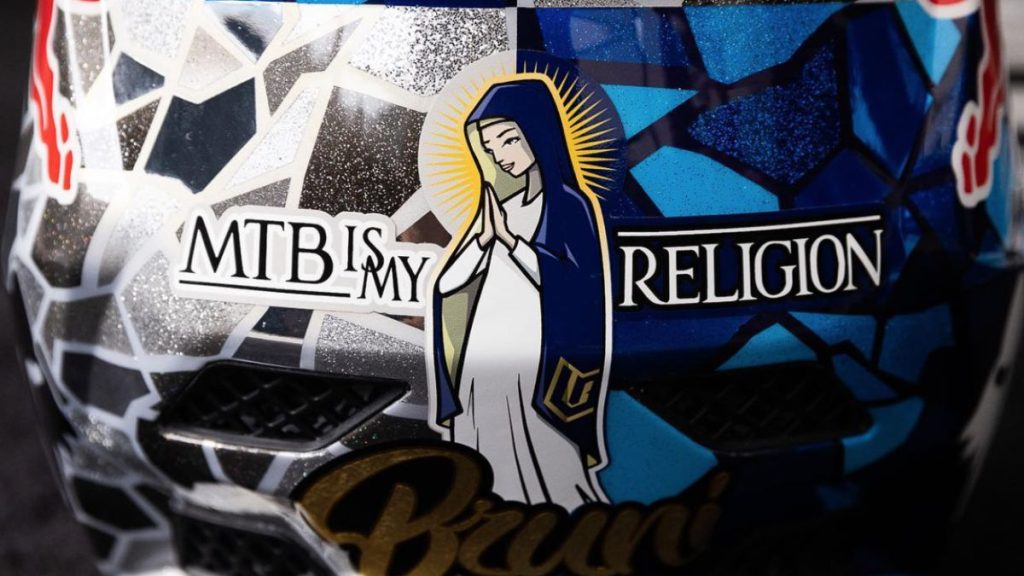 If action sports live on anything, it’s photos and videos. The images left by these majors are truly amazing and the source feeding millions of fans – and non-fans – all over the world. Thus, at Acción we like to talk to you from time to time about the people who have caught our attention the most. This month, Loïc Bruni mountain bike rider helmet.

The French rider uploaded the helmet he wore on the last weekend of March on Instagram In Lourdes (France), The first round of the UCI MTB Downhill World Cup was held. In such a privileged place of pilgrimage – where the World Cup has not been held for many years – Loc Bruni went to defend the title won in 2021. And he did so with a very special determination.

On Instagram, Bruni accompanied the helmet photo, where you can read “MTB is my religion” Next to a picture of the Virgin of Lourdes, with this text: “Religion leads most people on the right path. So my sport will be my passion sport. Mountain biking has taught me countless lessons, it’s my lifestyle and got me excited about a lot of things. Plus, as a side benefit , makes you a peaceful person. I’m glad I was able to wear this message on my helmet at Lourdes.”

If MTB were a religion, Bruni would be one of the candidates for Jesus Christ, as he has amassed as many as five world championships (one in the junior category) and two world cups on his record. With only 27 years old. That’s right, but at Lorde he couldn’t win the race. His compatriot Amaury Pierron, who descended from the slopes of the French mountain at full speed, did so. Although he did not lose the rope either, because he was able to climb to the podium, even if he was in third place. There is now a two-month break in the UCI MTB (downhill) World Cup. We’ll have to wait until May in Fort William (Scotland, UK) to see if he’s still in a fight to retain the title.