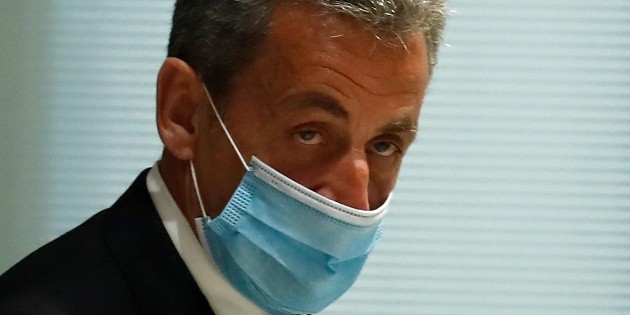 Nicolas Sarkozy Became today Sentenced the first former president of France to hard labor, Although he will not go to jail.

Paris Correctional Court that tried him before it Corruption and abuse of influence Committed in 2014 with a sentence Three years in prisonTwo of them are exempt, and the third is under house arrest.

The court imposed similar penalties on Sarkozy’s lawyer, Thierry Herzog, who was also banned from practicing his profession for five years, and Judge Gilbert Seibert, convicted of the same crimes.

Sarkozy will appeal the conviction

Sarkozy (President of the French Republic between 2007 and 2012), his lawyer, and the rest of the defendants all left the court without making any statements, although they later announced that the three would appeal the sentences.

It was introduced by the lawyer for the former president, Jacqueline Lavonte ‘Misunderstanding and anger’ By virtue of the fact that he “does not provide any evidence” and is based only on “evidence,” noting that his client is “calm and determined to continue the resumption of the demonstration” on his innocence.

In statements to the press, the lawyer indicated that the appeal suspended the application of the ruling and was convinced that her arguments will be heard in the appeal.

Before the words of the lawyer, Sarkozy’s wife Former model and singer Carla Bruni Denounced on social networks “Meaningless cruelty” against her husbandWhich encouraged him to continue fighting because “the truth will emerge.”

The ruling is a blow to the former president, away from the political frontline since 2016 but is widely respected among the French conservatives, but who sees his influence deteriorating on the judicial fronts.

See also  "They thought they were going to make 'La casa de papel' here"; They foiled an attack on a gold warehouse in Medellin

He faced other charges

Sarkozy is ahead of his predecessor in the post, Jacques Chirac, First to be convicted, in 2011, but he did not enforce strict prison sentences nor even sat on the dock due to his delicate health.

Plus, within two weeks he will be back in court Trial for allegedly illegal financing of his presidential campaign 2012 Judges continued to issue instructions on whether the campaign that led him to the Elysee in 2007 included illegal contributions from Muammar Gaddafi’s Libyan regime, which was in power between 1969 and 2011.

His name also appears in Other court summaries, Such as compensation paid to former minister and businessman Bernard Tapie, or surveys without public bidding from the Elysee, or in sales of helicopters to Kazakhstan and weapons to Pakistan.

Another conviction in any of those cases would reactivate the two years exempt from compliance with Monday’s ruling and could make the 66-year-old former French president take effect.

Sarkozy listened to the verdict relentlessly and barely let his emotions show when he met him, in a room crammed with huge expectations and with too many cameras and photographers at the door.

The president of the court began accepting the intercepted telephone conversations between Sarkozy and his lawyer and the police, and that his defense continued to nullify them throughout the oral hearing held last December.

And in it was the crux of the accusation, because the contacts between Herzog and his friend Osebert, the judge of the Supreme Court at the time, broke up to obtain procedural advantages in favor of Sarkozy in other cases.

The former president said in one of those recordings, “I will promote him,” indicating that he promised to use his influence to obtain an important position in Monaco.

From there, the ruling states that the three defendants, because of their training as jurists, must know that they are breaking the law and accept the premise of the accusation that there is a “corruption charter”.

The judgment considers this act particularly dangerous due to the prestige and functions of the three accused.

In Sarkozy’s case, this supports the “special danger” of the actions “committed by a former president who was a guarantor of the independence of justice.”

“He used his status as a former president and the political and diplomatic ties woven from his position in favor of a judge who served his personal interests,” he says.

The facts are so serious that they can only be sentenced, the sentence ends with a strict prison sentence, even though it states that house arrest can be carried out with electronic monitoring “in light of their current situation.”

The verdict is also not without criticism of the other defendants, a prominent lawyer and a superior judge, who, in the court’s opinion, distort justice.

Ironically, in 2015 Sarkozy opposed the possibility of commuting sentences of more than six months in prison.