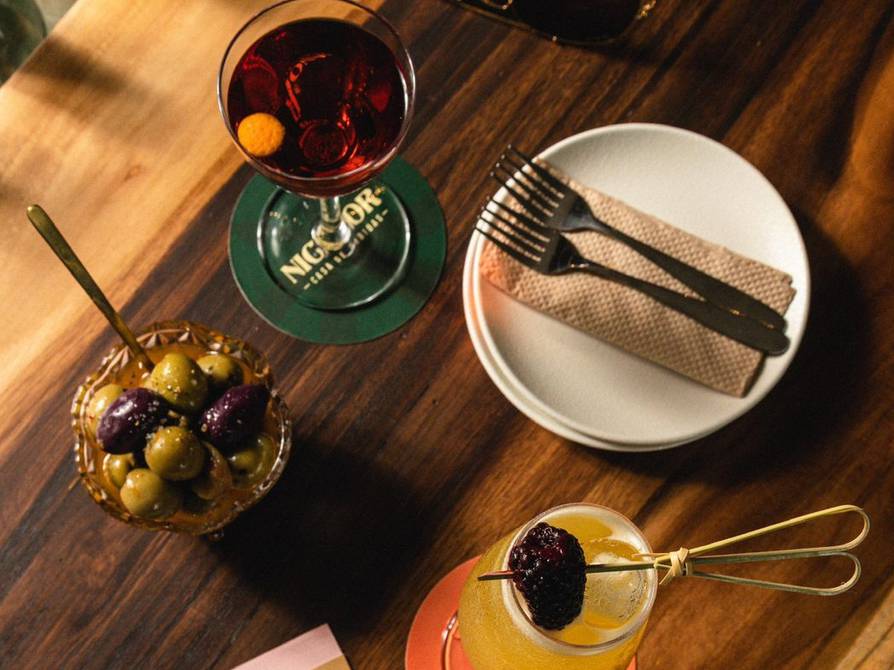 Miguel Ponce, Andres Damerval and José Fernando Perez are the three partners behind the foundation in the heart of the city.

Downtown Guayaquil is making a comeback. Its tourist attractions are no longer focused exclusively on the boardwalks or Santa Ana Hill; The gastronomy and local flavors tempt residents of the region, neighbors from other sectors, and tourists from other cities and countries. Panama Street, a trendy tourist area in the city, has new restaurants offering delicious and refreshing offerings, where having a good time is part of the experience.

Although the majority of establishments set up in the strip maintain their public interest until around 4:00 pm, at the corner of Luzarraga and Rocafuerte (on the side of the pink area), the new space has become a favorite meeting point for some drinks, in the middle of the sunny pearl of the Pacific Ocean. Nicanor Casa de Bebidas is a cocktail bar that brings three masterminds together. Miguel Ponce, Andres Damerval and Jose Fernando Perez are the Wednesday through Sunday hosts of this project designed for lovers of fine gastronomy, drinks and the inevitable after-dinner.

“This is a place for everyone who lives or visits Guayaquil to enjoy a true bar experience, where you can enjoy over 35 different cocktails, with unique alcoholic drinks and combinations, accompanied by a menu of dishes all thought out to accompany the drinks. All dishes are prepared to enhance all the preparations at the bar. ‘,” explains Bunch, a professional chef, who has been part of the Oro Verde series.

The name of the place is a tribute to Nicanor, the great-grandfather of Damerval, the man known for the warmth he received at home and shared with his family and friends. “He was someone who really enjoyed good alcohol, banquets and above all hospitality. We want to repeat that image in this place: a space where you can enjoy the best that we can offer, with the best hospitality in Guayaquil,” he adds.

Nikanor has three cards. The first, introduced as “It’s Aperitif Time”, with four types of Negronis and six other types of cocktails making possible mixtures of rum with coconut water, and gin with vermouth Dry and Sherry, Campari with Cinzano Rousseau. On the other hand, the catchy phrase “cocktail for country” from the names of each drink; This is how they meet with Turbo biela, Piñas a Milagro, sugarcane sour, Nicanor Sangria, Estuary, Moro, Mule Swap or Witch Beach. In this there are also more classic options, such as Mai Tai, espresso Martini, molata daiquiri, pisco punch, Manhattan on the rocks, as well as wine (white, pink, red, mix, sparkling), national beer, non-alcoholic beer and soft drinks flexible.

“Our intent is to have sustainable and incremental growth to maintain a completely strong team,” says Pons. The Nicanor also has three environments: a bar, a mezzanine and a pier, and the latter with tables hanging outside.

“Nicanoor as such I regard as the epicenter of tasting, of the drink, of Guayaquil to the world. Our conceptual hub is glocal (globalized with a focus on local products), save The permanent connection to our roots, the glorification of the components of our land as a key factor”, says Miguel Ponce.

food for the soul

Pons explains that the menu was developed with the premise of providing accompaniments or supplements to every drink in the house.

Damerval, another partner, is also in charge of the pub. He traveled to Buenos Aires to study music, and between this first assignment, he also became a waiter. “I graduated as a music and hobby producer, got into a friend’s bar, liked it and started studying, trained and traveled, and was in the States, and studied,” says the great-grandson of French journalist Bernard Fougere.

For him, the downstream cocktail encapsulates, in part, the spirit of Nicanor. This drink has been made with absolute vodka, cocoa, a tropical blend, cinnamon and coconut. “I had been thinking about the drinks menu for a long time, but I developed it in three to four months. The three of us went on a trip to visit farms to different cities; we were collecting flavors. After going to different places, we found the right places to include in the letter,” he says of His proposal, which they plan to renew twice a year.

Attention to the public from Wednesday to Sunday. 1:00 pm (Wednesday, Thursday and Friday) and 12:00 pm (Saturday and Sunday).