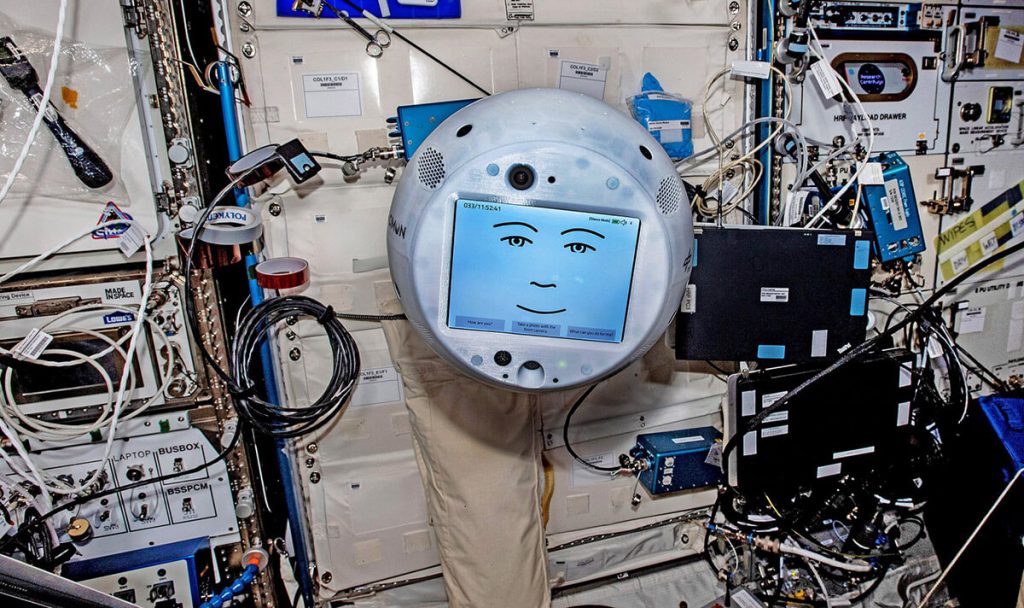 CIMON-2 is already aboard the International Space Station and Matthias Maurer is scheduled to blast off with Crew-3 on his “Cosmic Kiss” mission this fall.. The DLR space agency and Airbus have signed a mission contract to provide “in-orbit” missions with four partners. After the successful technology demonstration with Alexander Gerst (CIMON-1) in November 2018 and Luca Parmitano (CIMON-2) in February 2020, the focus is now on the scientific and operational use of CIMON.

The experimental scientific study, “Human Interaction with Al and CIMON”, made CIMON the subject of research. Includes more activities to support routine tasks and document complex scientific tasks. These new missions will mark the first time that an entire experimental procedure has been directed by CIMON and, more specifically, documented according to the individual wishes of the scientists or crew.

What is more, CIMON-2 will provide scientific support for an educational experiment known as “The 3D Kinetic Theory of Gases”. The kinetic theory of gases explains the properties of gases, with the idea that gases are made up of a large number of small particles that are in constant motion.

The contract covers up to four astronaut missions to ensure a complete data set Allows robust analysis of CIMON-2 capabilities. The knowledge gained from the new CIMON-2 missions will help CIMON perform more complex missions in the future.

CIMON-2 is now updated: receives new software packages, new scientific procedures and adapts to new security standards. CIMON-2 is also “learning” German as a second language and will use it as part of educational activities from orbit, for example in a survey for schoolchildren and on a demonstration tour of the International Space Station with astronaut Maurer.

The CIMON interactive cosmonaut assistant was developed and built by the German Space Agency DLR with funding from the Federal Ministry of Economics and Energy and implemented by Airbus in Friedrichshafen and Bremen. IBM Cloud’s Watson AI technology acts as a voice-controlled artificial intelligence.

The human aspects of the care system were jointly developed and supervised by scientists from Ludwig Maximilian University Hospital Munich (LMU). This was ensured by the ESA Biotesc User Support Center at Lucerne University of Applied Sciences and Arts in Switzerland CIMON also works perfectly on the ISS Columbus unit The cooperation of astronauts with CIMON is accompanied by Earth.

CIMON is a technology experiment developed and built in Germany to support and increase the efficiency of astronaut work. CIMON can display and explain information and instructions for science experiments and repairs. The advantage is that the astronaut has both hands free because he can access documents and media through voice control. Other applications include using it as a portable camera to save astronauts’ work time.

CIMON can take on certain routine tasks, such as documenting experiments, searching for objects, and taking inventory. CIMON can also see, hear, understand, and speak. His eyes for orientation are a stereo camera and an HD camera for facial recognition as well as two additional side cameras for photo and video documentation.

Ultrasound sensors measure distances to detect a collision. Its ears are eight directional recognition microphones plus a directional microphone for good speech recognition. Your mouth is a speaker with which you can talk and play music.

IBM Watson technology from IBM Cloud is the foundation of AI for speech understanding. CIMON self-study was excluded; It must be actively trained by a human. AI for autonomous navigation comes from Airbus and is used to plan movement and recognize objects.

With 12 internal rotors, CIMON can move and rotate freely in all spatial directions. Thus, it can turn to the astronaut when directed, nod, shake his head, and follow spatially independently or when asked. Your mouth is a speaker with which you can talk and play music.