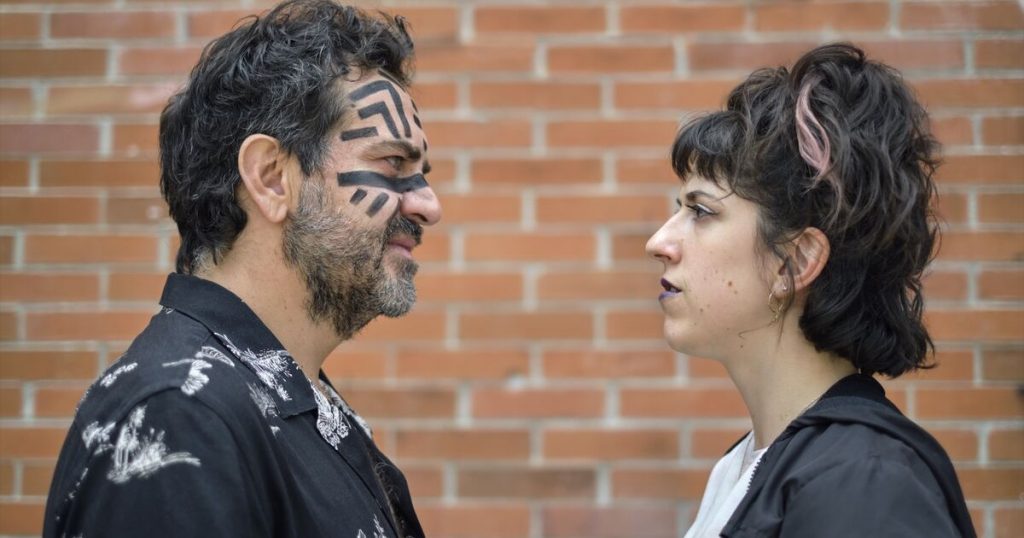 What did you like about this series and its characters to work on?

Lucia Uribe: everything. The script, the characters, the tone – which is dramatic but has comic connotations – the fact that it was a story of a breakup, a divorce, with all the melodies and pain, but at the same time wanting to move forward with our relationship with our daughter. Diego, an amazing director, Flavio Medina is the coolest fellow actor in this world, Isabella – who plays our daughter – who is the most amazing little actress in the universe…

Flavio Medina: Lucia and I, I must stress that we didn’t know each other until the day of the casting. The second we shook hands and kissed with great pleasure, we had absolute chemistry, wholeheartedly. Having the opportunity to work with someone with whom there is this chemistry, this communication, this admiration, is amazing. It is a very important story, depicting reality, this current way of relating to the other, marital relations, conflicts, divorce, the relations that now exist between parents, children, integration, masculinity, feminism … The series of titles is very important for what we are witnessing in the world. We are in an important transformation phase in society and we need to see these types of products, that really depict the reality we live in, in order to move forward.

Mercedes Hernandez: I really liked that the character of Idalia is so far removed from the service woman that it seems that she does not exist in homes. In this case, Idalia lives with the family, and that’s part of the problem they face. I am very honored that productions think in this more comprehensive way, but above all more realistic, because that is what really happens in homes. The people who work are part of our homes.

Pierre Louis: The highlight of what Mich said, what I like about Fausto, my character, is that in general when we see a third party in a disagreement, they are usually characters that are a bit linear or drawn in such a way that their complexity is only that they are bad for removing someone’s partner, and rarely We can see the reason for this character and see that it has more connotations than just downgrading someone’s partner. He is a person of many feelings, qualities, virtues, and shortcomings. Being able to tell this complicates the story and makes it more interesting.

Pierre, your character in particular has an extraordinary humanity in the treatment of these characters. How did you do that?

First of all we had a great script, and from there the character was really supported, meaning they are very human characters who fall in love, live, live in a constant swing and not get stuck in a particular emotion or a particular line of thought. For me it was easy because of that and because of Diego’s guidance. This made it easy for me to navigate.

Mercedes, how did your relationship with Isabella work? It feels very real.

MH:Maybe it has to do with the fact that I had a son and that I was also a teacher. I have sympathy for children. But I must also say that Isabella is his sweetheart, anyone who would love Isabella; it’s magic. The coach she had, Ursula Brenda, is also my friend, and quite often we all started playing with her and got along really well. It was so much fun and we can easily relate deeply. Besides, Diego’s first job with us was to get together and live together. He made sure to start a family quickly. You made it, we even miss each other now.

What is the most challenging thing about your characters? Although they look like characters we’ve seen thousands of times, they are far from being, as they are exaggeratedly realistic and adapted to relevant themes as an actor.

LU: Exactly, and that’s pure gold for the cast. I very much wish I could always have this kind of role, in the sense of complexity, for humanity. They are complex human beings with successes and mistakes and pains and sorrows and joys, and it seems to me that there are characters like this in Mexican stories, characters you can get to know more, touch on themes of masculinity but from the place where they were affected, this series that is not “bad bad macho”. I think it’s absolutely wonderful for Roy’s character to be what she is, because how many progressive males like this we don’t know, and I’ve never seen them portrayed with such complexity. The masculinity that Roy wields is more controversial masculinity because it is real. He’s not the male rapist, but an everyday male who’s hard to support, which is vital to talk about.

PL: For me, the challenge was being able to create empathy. That the viewer saw me and did not think: “Ashes is disliked.” I wanted to remove that stereotype. The character has the duality of being a male character that exists for Julia, but at the same time she doesn’t have too bad problems. It was interesting to deal with these opposites.

MH: For me, what was most challenging was having a balanced relationship with Roy and Julia, because Idalia, as an experimental feminist, had to sympathize with Julia, but somehow Idalia in the house was Roy, because he was a mistress. from home. I was interested to reflect the affection towards two people, because Idalia loves both very much and the ideal for them is to continue together, but she even has a line that says, “You have to understand when it’s over.”

What did you think of the series when you first saw it?

MH: It touched me so much I saw the first five seasons in one round. Although I was scared and expected, I loved it and was very moved. I think the same will happen to the audience. This chain connects with many people.

PL: The nice thing is that every time I’m on a project I try to enjoy the process instead of thinking about the outcome. I think the process was great, as well as watching the series and being happy. It moved me so much and I am so excited. I’m sure it will awaken the dialogue.

This scenario moves a lot in the human condition and relationships. What is the reflection you want people to stay with?

FM: There are many topics and many reflections. As a spectator there can be no single reflection because it has to do with what affects you in the story and the characters. We are in a period of transition, trying to break old ideas and patriarchy, and the only way to achieve equality is respect, responsibility and conscience.