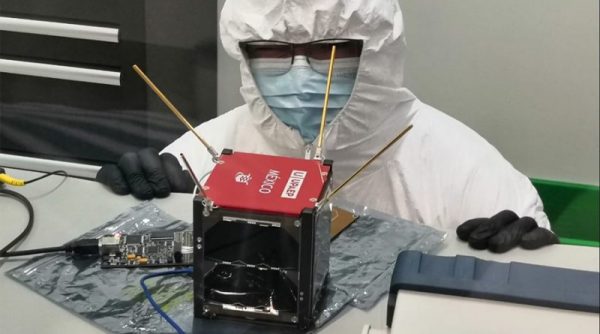 The US National Aeronautics and Space Administration (NASA) and the National Autonomous University of Mexico (UNAM) have developed small satellites for studying marine animals.

“This is a group of satellites that will travel outside the planet in a sequential and orderly manner, and will be put into orbit in a mission planned by NASA in 2025,” Mexican expert Alejandro Farah Simon told Xinhua on Monday.

The researcher explained in an interview that in the project called “Aztech-Sat”, four identical 10x10x10 centimeter satellites called “CubeSat” due to their cube shape were designed, which will orbit the Earth to track marine animals migrating from the north. The poles, south to the equator and back.

The plan seeks to implement the monitoring of marine species, such as whales, sharks and sea lions, with significant improvements such as greater geographic coverage, lower investment cost and greater bandwidth for data transmission, as these marine animals will carry sensors on their bodies and the signals they emit will be captured by ” CubeSat” to follow their paths and migrations, which will help to know their habits and the way climate change is affecting them.

“Observing these mammals will allow us to generate new control algorithms, as well as to understand more about the behavior of mammals, the way they move, where they go, what is the effect of tides on climate change, etc.” Referred to as joy.

The CubeSat would cost about 10 million pesos (about $500,000), less than budgets spent on satellites, which were tens or hundreds of millions of pesos.

“In the world there is a general trend of developing nanosatellites because now they are not very expensive and have the ability to compete in science or Earth observation,” explained Farah, from the Institute of Astronomy Higher Studies House in Mexico.

The scientist said that without this technology, it would be difficult to conduct such specific monitoring on Earth, since cameras would have to be placed in many places, as well as sensors, which would facilitate launching satellites into space and obtaining significant coverage. more spacious.

The “Aztech-Sat” program is supported by the Mexican Space Agency (AEM), UNAM and four Mexican universities are involved in the design and construction of nanosatellites.

Farah continued that this work is of great importance because this is how NASA works, with specialists from all over the world, and now Mexico has access to this technology.

“All around, this is a huge advance because NASA is sharing their technology with Mexico and we’re collaborating with them at a high level,” he said.

Likewise, the development of these small space instruments will allow the training of Mexican students through knowledge of new technologies and the deepening of space research.

“The launch of nanosatellites is guaranteed because it is a project at the invitation of NASA, where we have their knowledge and support for the project to be successful and used by Mexican students and professionals,” Farah concluded.

Promoters of the plan are NASA and the Ocean Energy Administration (BOEM), which is responsible for monitoring the responsible exploitation of energy, mineral and marine resources on the outer continental shelf of the United States and the AEM.

See also  Where is it and what will it look like?