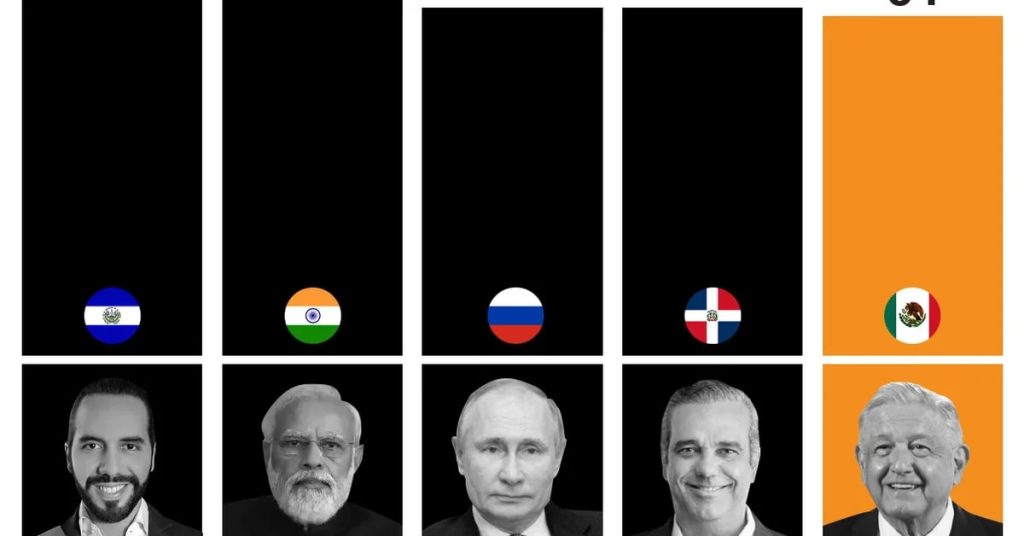 Something the President of Mexico has always bragged about, Andres Manuel Lopez Obrador (AMLO)Since starting his administration in 2018, he has won the approval of Mexicans. Don’t say it just to say it. It is true that many statistical exercises have proven his truth during these three years. But what is also true is that there are leaders who outperform him in citizen acceptance, even in the same Latin American region. For example, the controversial Nayib Bukele, El SalvadorAccording to a poll Consult MitovskyAnd

The consulting firm, which conducts its own survey periodically in Mexico, has compiled what has been reported by other organizations of its kind around the world to establish and compare the popularity of rulers of countries in the American continent and around the world. both of them Categories They are currently headed by the President of El Salvador, Neb Bokel, with an 81% citizen acceptance.

Meanwhile, Lopez Obrador, with 64 percent approval, ranks third on the continent, also placing it in the “outstanding” rating category. He is surpassed, as well as Bukele, by Luis Abenader, his counterpart from the Dominican Republic. At the global level, it is ranked fifth, preceded by the President of the Dominican Republic in fourth place. Russia’s Vladimir Putin is in third place and India’s Narendra Modi is in second place.

In the middle of 2021, The Mexican president boasted In one of his usual morning conferences that topped the list Morning Consultation As the most acceptable president in the world. But at the beginning of the current year, his Indian counterpart ranks first in the same ranking. In addition, on that occasion, the US news agency Associated Press (AP) warned about this in a verification report The results of the said consultations were not representativeIt only took into account 13 heads of government around the world in its statistical practice.

For its part, Consulta Mitofsky clarified that the results it is now publishing are from consultants who do the same, so, except in the case of Mexico, they are not responsible for the information provided.

Thus, in order to position Bukele as the ruler with the most acceptance by citizens in the world, they based on the numbers provided by online polls Search. In the Dominican Republic they are supported data consulting. For India’s result they use what he said Morning Consultation. Whereas in the case of Russia they used the data they obtained before Yuri Levada Analytical CenterIt is a private Russian research organization.

“Even if The methodologies used may differ in each country, is an excellent opportunity to see what level each president has reached in one document and compare them to each other”, explains the Mexican consultant.

Ironically, Mexico and El Salvador are also featured in another world census: annual global report Human Rights Watch. Although not with positive connotations, but a warning of the problems faced by citizens.

In Mexico, the president Andres Manuel Lopez Obrador has continued his media attacks on journalists and human rights defendersand his efforts to eliminate independent government agencies that served as checks on his power, and his attempts to co-opt Mexico’s justice system to persecute his political enemies. In November, he decreed that his government’s priority projects would automatically obtain permits without review and be exempted from transparency laws.

While in the case of El Salvador they warned: “President Najib Bawakil and his allies in the legislature summarily replaced Supreme Court justices who disagreed with them and passed laws to remove hundreds of lower-level judges and prosecutors. The appointed Supreme Court justices ruled that he could run for consecutive re-election, despite constitutional prohibitions. The government has also proposed a “foreign agents” bill which, if passed, would severely restrict the work of independent journalists and civil society organizations.”

Delfina Gomez submitted a batch of books after TEPJF decided to fine Morena 4.5 million pesos.
Vicente Fernández: Televisa and Univisión is a lively series inspired by Olga Warnat’s “The Last King”
TEPJF: AMLO must act with restraint, conscience and restraint after violating the electoral process during the morning