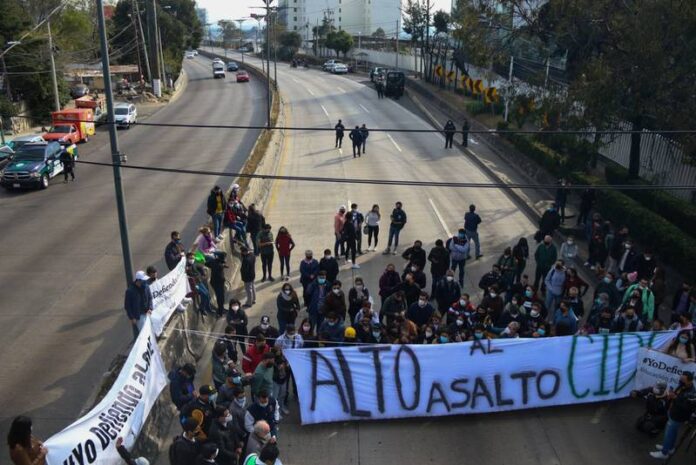 CIDE professors and students block both directions of the Federal Highway between Mexico and Toluca, at the height of the Center for Economic Research and Education, at the border of the mayors of Cuajimalpa and Álvaro Obregon, on the morning of Monday, January 24.

The siege began at about 9:15 a.m. Monday morning in the direction that goes to Mexico City; But a few minutes later, protesters blocked vehicular traffic in the other direction.

With shouts such as “looks, it feels, CIDE is there,” “more science, less obedience” and “university autonomy,” CIDE students explained that the blockade was due to Kunassett’s unwillingness to listen to their demands regarding the institute’s future.

This Monday, María Elena Alvarez Buella, President of Conacyt, called a meeting of the Council of Members to amend the CIDE Rules and verify the appointment of Jose Antonio Romero Telici as Director General.

During the blockade on Monday, academic Catherine Andrews indicated that they are seeking to “trample” the regulations that govern CIDE.

“We are facing violations of the laws of CIDE, and the Council of Professors is very much asking Dr. Romero and Dr. Alvarez Boella to stop violating our laws, to return to legality, and as you will see, the CIDE facilities are closed, there is no reason to close it, the only reason is that Dr. Romero neither wants nor does It can counter the unanimous position of society,” he commented.

Through a statement signed by the CIDE Student Community, the students denounced the attacks against the scientific community for opposing the abuses of Conacyt and Romero Tellaeche’s powers.

They indicated that they intend this Monday to approve the new laws to legalize the acts committed by the President of Conassett, Maria Elena Alvarez Boella.

Dr. Alvarez Boella ordered the closure of the doors of her legal affairs unit and the suspension of its activities. The doors of CONACYT have been closed to us on 3 occasions without even receiving petitions from the different groups that make up CIDE. Finally, I proposed to change the articles of association of our corporation, and to make legal the acts I had committed in the most absolutely unlawful. Despite the fact that the first meeting to change the statutes with the Council of Partners did not take place, today they will once again try to trample CIDE and its internal democracy,” they wrote.

“From the beginning, we students have been committed to dialogue and to exhausting all options necessary to defend our school. Unfortunately, despite all the above measures, the authorities are still not willing to listen to legitimate demands. As such the student community at CIDE has closed today starting at 9 a.m. :12 Mexico-Toluca Highway.

In the document, CIDE students ask for a dialogue table to stop the “assault on legitimacy”.

“The student community urged the authorities to listen to all voices involved in the conflict and open the necessary channels to stop this assault on legitimacy that led to this institutional crisis.”

In addition to CIDE students, students from other public universities in the country are taking part in the Monday siege, such as the Autonomous Universities of Coahuila and Benito Juárez in Oaxaca.

There are also representatives of universities in Nuevo Leon, Hidalgo, Nayarit, Morelos, Jalisco and Chihuahua.

This Monday, January 24th, is Alvarez Boila’s second attempt to amend CIDE’s public platform. The first happened on January 14, when the General Assembly of Partners convened to reform various articles of the CIDE Public Statute.

However, the two appeals have been classified as illegal, with CIDE’s General Statutes in Article 42, Section V, stating that among the powers and obligations of the Academic Council “the knowledge and approval in advance of, and presentation by the Director of, of any amendment to the Statutes of the Association.” the general assembly of the board of directors and the general assembly”; However, this procedure was not performed.