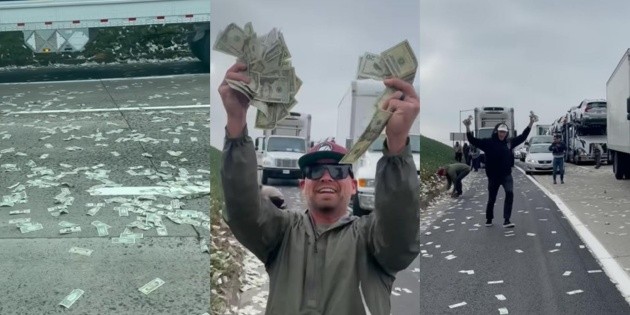 California motorists were shocked as they drove down the Carlsbad Highway to see “heavy rain” after an armored truck broke down and bills were dropped.

Upon realizing this, some drivers got out of their cars to collect the money scattered on the sidewalk, causing a traffic jam that lasted for several hours, according to the authorities. However, the people who were involved in collecting the cash will have to return it if they want to avoid legal problems.

The FBI is investigating the incident last Friday, November 19, and they are asking the people who took the money to return it.

“Many motorists immediately returned the money to the officers present at the scene; however, motorists were seen leaving the scene with stolen money.” According to a statement issued by the authorities.

The Highway Police and the FBI confirmed that through videos and photos posted on social networks, some people’s faces and license plate numbers were identified, so they recommend returning the money before going to your homes for him.