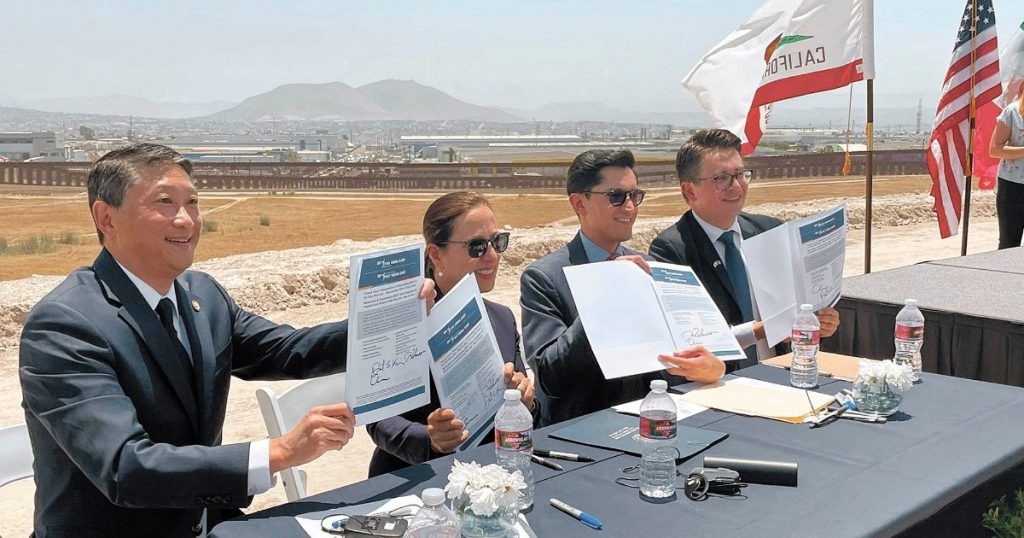 In order to create new cross-border infrastructure projects that will allow the expansion of trade capacity, the authorities in Mexico and California in the United States have signed a Memorandum of Understanding.

The Secretaries of State, Communications and Transportation, and the General Administration of Customs, as well as the California State Transportation Agency, the California Department of Transportation (Caltrans) and the San Diego Association of Governments (SANDAG) have given knowledge that the purpose is to improve coordination and cooperation on infrastructure initiatives at the Mexico-US border.

The Head of the State Department’s North American Unit stated that “the signing of the Memorandum of Understanding between the Mexican and California authorities represents the common will to cooperate, on the grounds that Mexico and California are more prosperous when they work together.” Mexican Affairs, Roberto Velasco Alvarez.

“I am proud to work with the government of Mexico and our regional partners to advance this commitment to change the way people and products move across the border region,” he said.

Derived from the agreement, one of the most important projects to be promoted bilaterally for the border is Otay II – Otay Mesa East, which seeks to serve as a new multimodal land border crossing that improves security and mobility, enhances the economy of both entities and encourages the use of innovative technological solutions.

In more detail, it consists of the construction of a new multi-purpose border crossing in the Tijuana-San Diego region, approximately 3.2 kilometers east of the current Mesa de Ote-Ote border port.

The new port will contain technological innovations and connections to the road networks of both countries that will allow to efficiently measure the progress of vehicles, in addition, thanks to this it will be possible to provide advance information on waiting times at the border ports of the two countries. The area, such as the Otay II tolls.

The addition of the eastern Otay Mesa border crossing will have a significant and immediate impact, reducing wait times during peak hours at existing border crossings by approximately 50% from the day it opens.

The Ministry of Transport and Communications is participating in the project in coordination with Caltrans and Sandag, with an investment of 2.8 million pesos to build a 1.25 km access road with four lanes in each direction.

In addition, Caltrans District 11 and SANDAG are laying the foundation for the Otay Mesa East Port of Entry project.

It is estimated that the new crossing will be ready by the end of 2024, thus allowing for more flexible and efficient traffic.

In more detail, it consists of the construction of a new multi-functional border crossing in the Tijuana-San Diego region, approximately 3.2 kilometers east of the current Mesa de Ote-Ote border port.