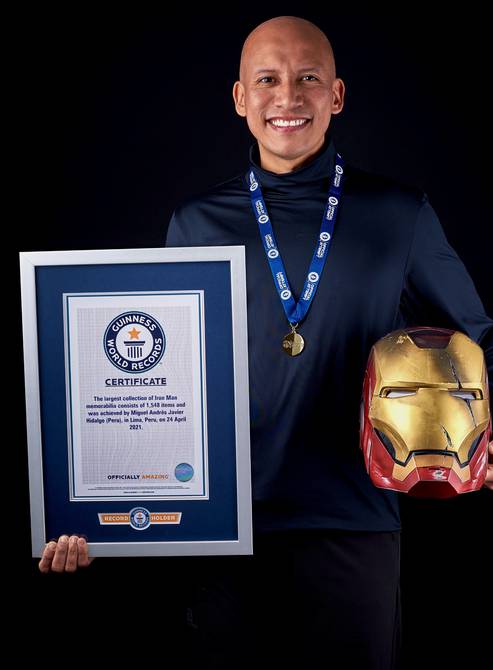 His dream is to be a part of Guinness World Records Meet a man from Peru Miguel Andres Javier Hidalgo He longed for this title, at first he didn’t know how until he found it, Iron Man memorabilia collection.

The mail containing the notice arrived one early morning in September of this year, looked at it several times because he was skeptical, and as soon as it appeared he checked it again and was convinced. Yes, it was true, though it also took some time to get to this point, because he thought he was misinterpreting it, because the statement with the advertisement was in English, but he finally realized that it was a reality.

The dream has come true, but also the end of one road and the beginning of another. His set for which he received the title consists of 1,548 items, all of them original.

In his testimony, the date is April 24, 2021 and that’s because on that date he held a Guinness World Records event. “It’s one of the main requirements they ask, so finally they put the date on which you held the event on the certificate, not when they agreed to the record,” Javier Hidalgo explains to this newspaper from Lima.

How did the idea of ​​creating this group arise?

Although he’d heard about the character before, she totally caught his eye between late 2006 and early 2007. While waiting for his turn to be seen by the dentist, he began reading the magazines usually found in the waiting room.

See also  It is recommended to watch 50 movies on Netflix, Amazon, HBO and Disney +

“I picked up a magazine and in this magazine I remember she said something like ‘The Story of Iron Man’, it was in Spanish. I started reading the story of Iron Man, its beginnings, where she talked about a man who came out of a cave in which he was a prisoner and came out with very few resources, especially using his ingenuity, then That caught my attention. And also the drawings I could see, the shield. Since then, I’ve begun to get to know him better, and have acquired the character of Iron Man,” says the Peruvian, who serves as a consultant and Fitness Trainer commercial and personal.

Then he began to see collectors on YouTube videos and admired the way they talked about the subject, which they saw beyond the superficial, that is, they looked at details such as the sculpture, among other things. In addition, get to know the actor through films Robert Downey Jr. “His personality caught my attention, and his sense of humor made him captivate me even more and point me toward Iron Man, because he also collected the other Avengers,” he says.

At first it was not in his plans to become a collector, but as time progressed, this hobby became much more. “What I was getting invited me to investigate a bit more about the history of that piece. He wasn’t thinking of getting a Guinness world record, but I heard it when I was a kid and it was like a dream I had, but I didn’t plan to make it through Iron Man,” he asserts. .

The process of achieving the Guinness World Record, according to Javier Hidalgo, began between 2015 and 2016, The time he proposed to count how many pieces he had. Since there were already several of them, he began to do a very general inventory, and realized that there were more than 1,000 items, not counting the duplicates that could exist. “There I said to myself, ‘I think it’s time to apply to Guinness World Records’ because it’s no longer a small number, and I also saw that Iron Man is not in the Guinness Book of Records as a character,” he says. .

The application was submitted in May 2020. Once the request was sent, you had to wait for a response. In November of the same year, they responded, stating that his case was “worthy of review” and showing him the requirements he had to submit. That month, the process began and one of the main requirements was to hold a public event, which it did in April 2021. On that day, a team of jury did after cutting and checking that it was authentic.

Another requirement is to send pictures of each piece, Which consisted of five to six pictures with different angles. The challenge with this was to pick up pieces that weren’t in their boxes and had to see a moment of the day with the light to come out nicely. To comply with this, he promised discipline, so every day of the week, starting at 10:00 p.m., 11:00 p.m., set aside three to four hours. This has been for a year and a half at this rate, from November 2020 to April – May 2022. The pictures were sent when he actually got them, but he didn’t do it in one day, and it was also several nights.

Although there are 1,548 Iron Man in the Guinness Book of Records, his collection currently adds up to 2,500 pieces with other characters.

The investment is approximately $120,000. This value does not include the cost of shipping, some things were obtained, in addition to Peru, between Europe and the United States and Mexico, although mainly from these last two countries.

Iron Man is a Marvel character and says that at this time he does not know if both Marvel and actor Robert Downey Jr. know the group. He has thought about writing to them, and believes that they will not read it on social media because of the many messages, although he does not lose hope that the news of this record will reach them.

Once he fulfills his desire for a Guinness World Record, his new goal now is to open a bookstore in Lima. “I feel that education, culture and reading are a way to help eradicate poverty. The number of books read annually is generally low and it also happens to children. Sometimes we don’t have a proper place to read.

One of his other wishes concerns a shelter for the elderly, who are treated like a family member.

From August 2021 opened Iron Man Museum In the Plaza Norte shopping center in Lima. It can be visited from Monday to Sunday, from 10:00 to 22:00. free entry.

On display, in addition to Iron Man, are pieces from Spider-Man, Captain America, and more. (YO)