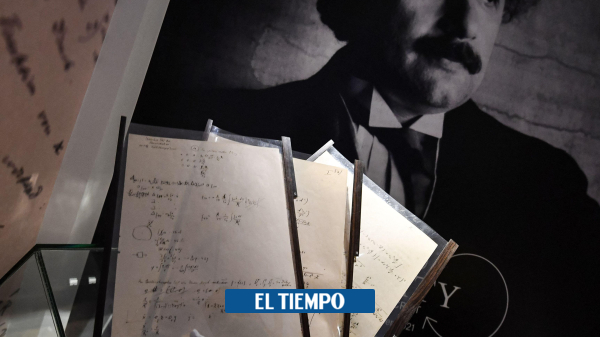 a draft Manuscripts from Theory of relativity general Albert
EinsteinIt is due to be auctioned, estimated at between $2.2 million and $3.3 million, on November 23 in Paris.

“It is without a doubt Einstein manuscript “The most expensive item ever offered at auction,” Christie’s auction house said in a statement.

The document is a 54-page manuscript drawn up in 1913 and 1914, in Zurich (Switzerland) by the famous German physicist and his associate and confidant, Michel Besso.

Thanks to this Swiss engineer, Christie’s explained, “the manuscript has reached us, almost miraculously: Einstein He may not have bothered to keep what might sound like a working document.”

(You may want to read: NASA Will Hit an Asteroid Spacecraft as a Defensive Measure)

Following his theory of special relativity, which led him to elaborate the formula “E = mc²” in 1905, Einstein began work in 1912 on the general theory of relativity. This theory of gravity, finally published in November 1915, revolutionized the understanding of the universe.

Einstein died in 1955 at the age of 76 and became a symbol of scientific genius, as well as a popular figure, with his famous 1951 photograph sticking out his tongue.

In early 1913, Einstein and Besso “began work on one of the problems the scientific community has grappled with for decades: the anomalies in the orbit of Mercury,” Christie’s recalled.

Both worlds solve this puzzle. But they did not do so in the accounts of that manuscript, which includes “various errors that went unnoticed.”

(It might interest you: Colombian Physics will receive a Franchise from the French Academy of Sciences)

When Einstein discovered them, he stopped worrying about the manuscript, which had been left in the hands of Michel Besso. The auction house notes that “handwritten Einstein scientific documents from that period, and more generally, from before 1919, are extremely rare.”

“As one of only two surviving working manuscripts documenting the genesis of general relativity, it is an exceptional record of Einstein’s work and provides a fascinating insight into the mind of the twentieth century’s greatest scientists.”

The other known document from that crucial period in physical research, called the “Zurich Notebook” (late 1912, early 1913) is in the Einstein Archives at the Hebrew University of Jerusalem.

Martian rocks on Earth: this is how meteorites reached the Red Planet

Challenging maneuverability of two astronauts to save a space station

‘Paper for All’: a scientific publishing project producing an audiobook and digital journal bringing together Chilean research on Alzheimer’s disease 4 min read

‘Paper for All’: a scientific publishing project producing an audiobook and digital journal bringing together Chilean research on Alzheimer’s disease

Sciences. – 60 years since the flight of Enos, the first tropical chimpanzee 2 min read

Sciences. – 60 years since the flight of Enos, the first tropical chimpanzee