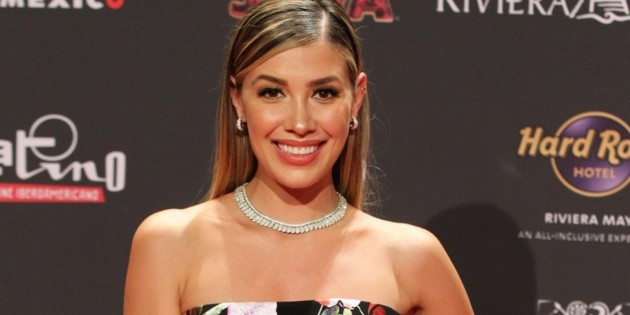 Michele Salasdaughter Luis Miguel, broke the silence about his acting and his treatment in the series “Luis Miguel”, which tells excerpts from his father’s life in a biographical and narrative way.

“I am a public person, but first of all I am a human being”

In the final chapter released last Sunday, you see the moment the singer learns that his daughter is in an affair with his manager and friend Alejandro Ascensi, Thanks to some of the pictures they sent him.

There are also early childhood memories where Luis Miguel was supposed to finally announce his paternity, but in the end he didn’t, while on the other side of the screen, Stephanie Salas shrieked while hugging Michelle seeing that Luisme had failed again.

Through the stories on her Instagram account, Michelle wrote a message, divided into three, in which she confirmed that she did so with an open heart, sitting at the desk of her department to express in the best way a sensitive topic, because it is about his life, family and privacy, which was revealed in a negative way.

The young influencer emphasizes her disagreement with the way the series seen on Netflix has been sexualized and the way it has been portrayed in general.

“First of all, it seems important to me to make it clear that I did not allow my picture, my name and my personal life to be used at any time. Nor did they ask me if I agreed to have my life become television and in one of the main characters in the fictional interpretation of this.”

In the letter he reveals that he had unforgettable moments with his father, and that he is glad they both know a small part of that through the production produced by British Mark Burnett, but You feel that the way you treat women was disrespectful And in his case, the daughter of the character who dared to tell a little of his story.

“I must say that I find it really unnecessary, disrespectful and unfortunate the way the production decides to treat a woman, her daughter, to end this chapter of her story. Explicitly sexualizing her at age 19 and violating her privacy,” read.

Michelle Salas has confirmed that she doesn’t like being one of the people who should go out to clear rumors and that’s why she has stayed away from scandals and opinions when it comes to her person, for her whole life and for her mental health. Try to take care of you.

However, he admitted that since he remembers, his life has come into view and that if he is already used to it, there are times when it is hard for him to accept it.

“I am a public person, but first of all I am a human and a woman. A woman who many think has everything, but few know the truth. Perhaps today is not the day to tell them, but I know that at some point in this moment, I will open more doors My life, how I grew up and how much it took me to get to where I am. And I am sure that on that day they will understand many things and that few will feel defined. At the end of the day, we all share the same desires, the same fears, the same doubts. We all fall and rise, we all have moments Difficult “.

She ended her statement by saying that no one should have felt how she felt when watching the series, or be treated that way.

Much less without your consent. It’s not fair for them to use my life and my story As if they had the right to it and distorted it at a time that suits them.”