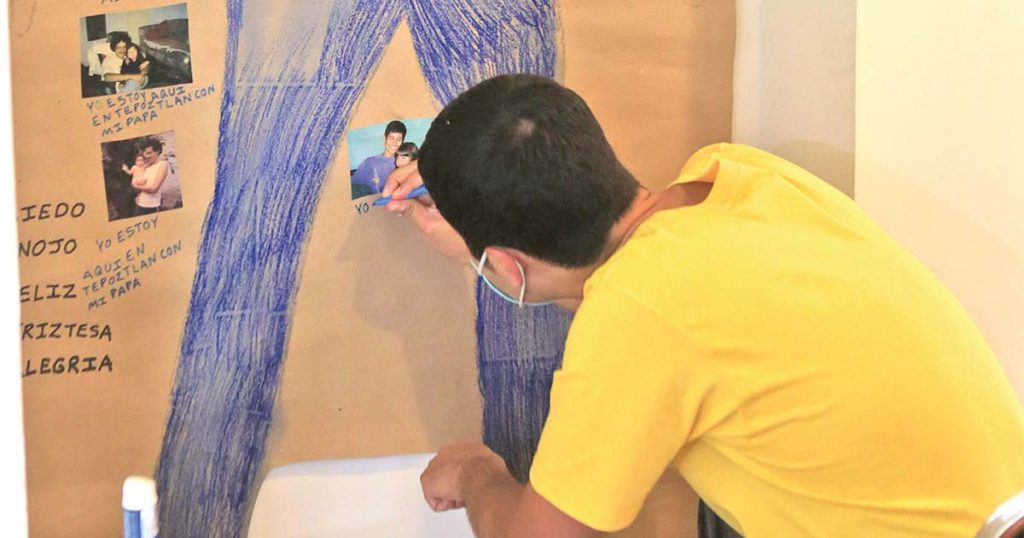 TheThe official residence that houses 14 of Mexico’s presidents and their homes and offices now has a space dedicated to young artists with neurodevelopmental disorders, such as the autism spectrum. The 27 young people who attend Los Pinos have the opportunity to develop through music, plastic arts and physical expression.

For me, it is very important that they be given this beautiful space, with the capacity to take in so many people and with so much historical significance for the residents who are separated from each other. “She talks about taking a step forward in their cultural rights,” said Brescia Navarro, a fine arts teacher and a graduate of the La Esmeralda National School of Painting, Sculpture and Engraving.

The Armonics Program, in which 27 young people study in the National System of Musical Development, located in what is now the Los Pinos Cultural Complex, originated after Leticia Colina, a graduate of the Bologna Theater School (Italy), toured different parts of the world, revolutionizing In the treatment and comprehensive development of autism in Mexico.

Spain has projects through the arts; in the United States; In Italy they went through all these experiences. “There are many projects of this kind, but people still refuse, because they think the arts are not productive,” said Leticia Colina, Armónicos Program Coordinator.

The first time Leticia dealt with autism spectrum disorder (ASD) was 35 years ago, when her son was diagnosed; This was a time when it was very difficult in Mexico to get tools and tools to help young people with autism achieve autonomy and self-determination.

See also  Where do you play chess online?

Leticia discovered that through art, young people with autism can find a way to connect with their emotions and feelings, expand their communication skills, develop cognitive and psychological skills, and recognize their dignity as people.

Art is an instrument of evolution, because it has structure. A relationship with the universe, with space, with time, with rhythm and sound,” he explained.

During their daily work, they take on the theme of music, supported by physical expression and the plastic arts.

Through music, they learn about their own body, emotions, feelings, and sense of community; In addition to learning to work as a team, listen to the other, respect, take turns, align and harmonize with the other.

With physical expression, self-recognition and connection to both sides occur. (Laterality is the functional predominance of one side of the body over the other as a result of the distribution of functions in the brain. Through this process, children are identified as left-handed, 90% of the world’s population, or left-handed, the remaining 10%).

What art brings to humans is the integration into their senses, into their primary attention and cognitive function, and it also allows us to delve deeper into parts of feeling. “We work from where I feel fear, where I feel angry and happy,” said Leticia Collina.

These young artists have been attending the program since November 2019. In these three years, their progress has been extraordinary.

We’ve seen a lot of maturity in her. They take it very seriously, because they say “they take me very seriously too”. We have had presentations and exhibitions. They are very excited when people come to see them, when they feel they are being taken into account and when they sell their artistic creations (such as mugs and T-shirts) to the public,” said Brescia Navarro, fine arts teacher.

Some of the shows they have given since 2019 are: “We are all different”, a musical rhythmic exercise; “Estrellita” op. 1, virtual ensemble; “Caballetto” by Sylvester Revoeltas, Opus 2, virtual set.

Since she was a student, Brescia has volunteered to give art classes to students with neurodevelopmental disorders. Find out there the originality found in the creations of these students.

I also discovered that art was a way to expand their communication skills and that it connects them. I’ve had many experiences of people with profound autism, who suddenly when created were others, could bring out a little more of themselves, which made me hooked, Brescia recalls.

What the Los Pinos community has learned, by living with these young artists, are the prejudices that society still suffers from. Policemen, for example, affectionately greet students and talk to them, when at first there was a certain distance.

Mauricio, an artist with TEA and a student at Harmonics, is currently working on a self-portrait to capture the vision he has of himself and the world. He feels joy in his heart, fear in his arms, anger in his torso, sadness in his eyes, happiness in his head.

And he said in large letters, “I know it is bad for people to sell live animals; it makes me happy to be with good people; it makes me angry about absenteeism; I feel sad when I go alone to the gardens.”

Let’s understand that (opening up space for them) is not about giving them a chance, it’s about the fact that they can contribute so much to society. We have to get to the point where we stop talking about disability and point to neurodiversity. They gave us the opportunity to see all the points of view, to enrich ourselves as a society,” concluded Brescia.

We invite you to view our content on the following networks:

Opinion And the common