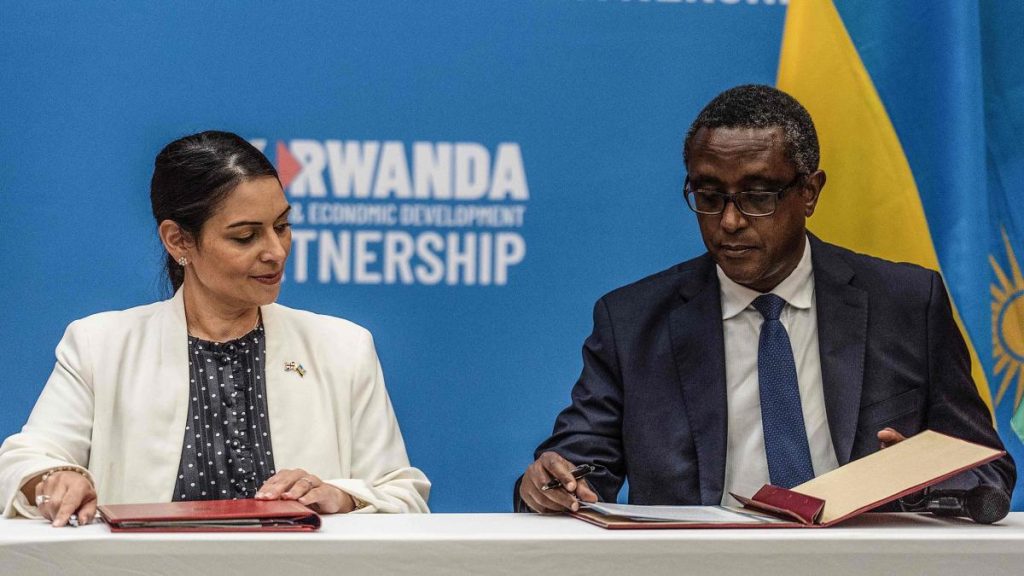 According to the new British immigration policy, an asylum seeker will be able to risk his life for months, travel thousands of kilometers from Cameroon, Senegal or Ethiopia, deal with smugglers, spend all his savings, and spend weeks or months in refugee camps. The English Channel in a small boat that is hit by waves of several meters … On arrival, he is taken back to Africa, even further from where he left.

Specifically for Rwanda, based on an agreement signed between the governments of London and Kigali after more than a year of negotiations, announced by Prime Minister Boris Johnson with great fanfare to allay the wrath of Conservative voters (as well as many workers) who supported Brexit, among other reasons. to stop the entry of foreigners into the United Kingdom and to “control our borders”, and to consider it unacceptable that the English Channel should become a sieve.

Last year, 28,526 people entered the country illegally via this route, 4,578 people have entered so far this year, and this week an average of three hundred people per day, which authorities fear will soon become a thousand. Is this the reason for our exit from the European Union? A section of the electorate asks angrily on the eve of potentially disastrous municipal elections for the government.

In the first phase, pending approval by the House of Commons of the new Borders and Nationality Act (which resumes sessions next week), only refugees arriving in Great Britain will be sent to Rwanda. By sea or by truck and unmarried men are considered to be at greater risk of becoming criminals. In return, President Kagame will receive €140 million annually, and will commit to “incorporating refugees into Rwandan society on an equal basis when applying for work and access to health care.”

Britain itself accused the Kigali regime of committing murders, disappearances and torture.

The great irony is that the UK government itself has questioned the respect for human rights and freedoms (such as freedom of the press) by the Kigali regime, denouncing in a recent report its “murders, disappearances and torture”. Although Paul Kagame is credited with pacifying the country after the 1994 massacres between Hutus and Tutsis, major modernization with the help of international money, and less corruption than his neighbors, he has been in power for twenty years and is accused by the opposition of tampering with elections and crushing any kind of schism.

Announcing the pilot program to send asylum seekers to Rwanda, Boris Johnson said, reinterpreting Lord Palmerston’s phrase that the UK has no permanent friends or allies, only eternal interests. But the adjective “merciful” does not seem at first glance the most appropriate to describe the new policy, especially from the point of view of those who are put on a plane to travel the 6,500 km separating London from Kigali, and after their epic. To reach the English coast, they find themselves in an African country that is not their own where they would be foreigners.

“Our new immigration policy is humane and full of mercy,” said Johnson, who has been known to have tampered with the dictionary since he invited parties (with liquor, birthday cakes and all the hunting) that were held in Downing Street during an epidemic, and who has already received a fine from Scotland Yard. And a few more are expected. He is the only prime minister in the country’s history to remain in power after admitting to breaking the law (which he himself imposed “to save lives”).

“The purpose of this initiative – the Tory leader indicated – is to fight the heartless smugglers who take advantage of the vulnerability of migrants, endanger their lives and threaten to turn the English Channel into a cemetery.” But both opposition parties (although Labor also wants to restrict access for asylum seekers) and human rights organizations have decried the plan as “cruel, costly, ineffective and of dubious legality, likely to be brought to justice”. “Courts”. London is a signatory to the United Nations Refugee Convention, which prohibits sending them to countries where their lives or freedom would be in danger, and the European Convention on Human Rights, according to which no one shall be subjected to torture or degrading or inhuman treatment. .

Indeed, what Johnson wants is for his outlandish idea of ​​sending refugees to Rwanda as a deterrent to reduce the number of people crossing the English Channel in boats more and more frequently, in the face of increased security checks. Overland roads they used to use, like trucks and Eurostar. Most of them have relatives or acquaintances in England, and after being prosecuted and spending time in detention centers, they disappear from the system and join the black economy.

The British government has been negotiating with other countries for some time, to no avail, about outsourcing asylum seekers similar to what Australia has done. In further actions to try to curb illegal immigration, it is preparing to hand over operational control of the English Channel to the Royal Navy, imposing a maximum penalty of life imprisonment on human traffickers. All this, according to Johnson, in a model of the world of “mercy” and “humanity.”