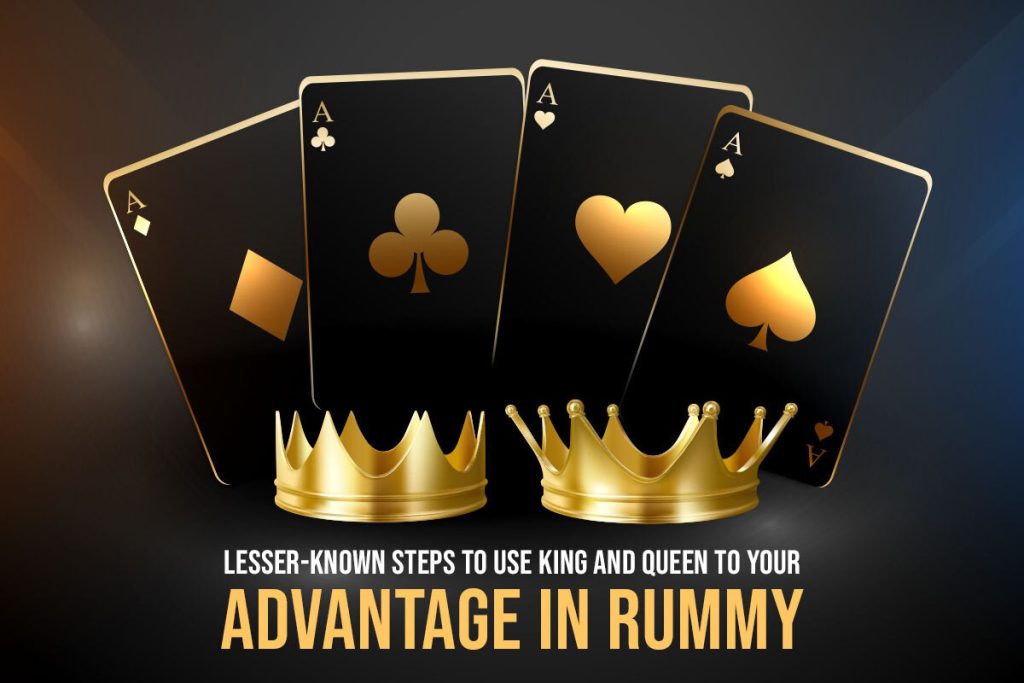 At this point, Rummy is the biggest sensation in the online gaming market. It ranks as the most visited game for players who regularly play card games online. Players are now going over the oldest skills in the game, practicing them in new matches, and rediscovering more and more strategies daily.

Like all other card games, the value of every card changes with every different card game. In Rummy, Ace is the lower and upper card that ranks above the King and below 2. The Jack, King, and Queen all are given 10 points in the game, while the valuation of the other cards from the deck is equal to their face value.

In Rummy, the King and the Queen are called the ‘face’ cards and play a central role in the game. Various players have different approaches while treating these two characters, and recently, unorthodox ways have emerged as unique strategies that alter the player’s course through the game. Regular players often do not prefer these two pieces if not taken care of early; they become quite problematic later in the game. The player must know how to play Rummy in its most traditional format to learn and play the most skillful moves.

In this blog, we will look at the unconventional ways the King and Queen should be used if you are unfortunately dealt with the same right from the start.

Disposing Them Or Melding Them Right At The Start

The only objective of a rummy player is to win the game by making appropriate sequences. To do that, they must focus on creating a pure sequence that will help them score the right points in the game. As per the game’s official rules, King and Queen are high-power cards and carry 10 points each. Therefore the player has to meld both these cards immediately so as to not suffer a penalty. Melding involves pairing the cards with the Jack, which will remove them early from the game, playing a safe bet.

The player should try to meld the King and Queen first, but if that does not work out better, both characters need to be disposed of as soon as possible.

After completing the first round, the player should exchange both high-power cards for cards with a lower face value. After that, the player can slowly create their formations and strategize accordingly without the fear of suffering a disadvantage later in the game.

Grouping Them With Aces

Another very unusual way of using these two cards is by pairing them with aces. This sort of play has rarely been seen, but some experimental players like to try this technique. Ace is the highest value card in Rummy and also the lowest. Therefore you can use them to make two separate pairs if you get them both on your dealt hand. Melding helps you get rid of the high power cards because of Ace’s duality power value.

So suppose if you have a hand with K, Q, and J from a single suit, then you can form a sequence with Ace being the final card on the set. This form of play is quite inviting and helps the player set an early design to incorporate the King and the Queen in the game.

As competitive as the game is, it demands unwavering focus from the player because even a slight overlooking can cost the player the entire game. Adaptability is a critical feature that forces the player to quickly change his motives and formation to pursue victory in the game. If the player has held the King and Queen in the game for long, they are definitely at risk of suffering a hard blow. High-stakes cards have to be abandoned before the game ends. This maintains the order of the game even if you make a few bad decisions at the start.

This adaptability allows you to be more strategic at the end of the game and not rush with decisions. You can also get the privilege of declaring Rummy and surprising your opponent with your well-made sequences faster in the game.

Slowly Adding Them To Other Melds

This play is very risky, wherein you have to hold the card and wait to add them to other sequences. A King, for example, could easily be placed between a 9, 10, J, and Q, and the Queen can be too in the same manner. But this form of waiting requires the player to sit with the card for longer till the perfect sequence is formed. The significant danger here is that if the opponent calls a declaration, then there is a high chance for you to incur a loss since you possess a high-power card that does not have a batch.

It is essential to understand all aspects of the game of Rummy to get ahead of the competition in the game. In Rummy, the more ways you know to treat a card directly correlate to your chances of winning the game. The King and the Queen are among the essential characters in Rummy, and if you can manage to deal with these two, you have already gained the upper hand over your opponent. Therefore at times like these, using unconventional moves in unsurprising ways always helps the player gain positive results and pushes them towards a chance at victory.

See also  Where and when do you watch a Netflix event? - Finance