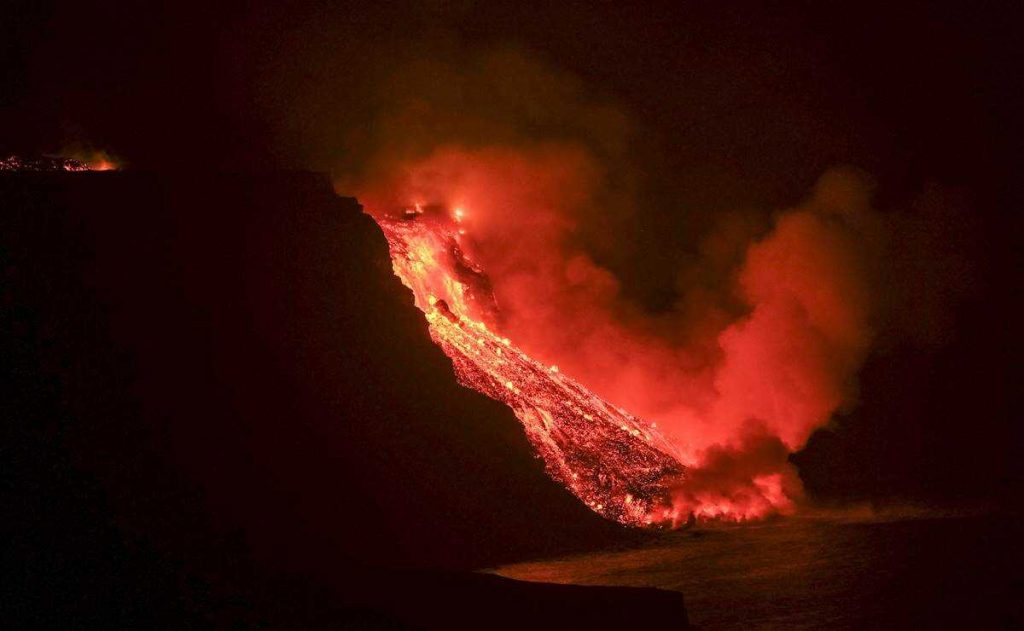 Lava reached the sea on Tuesday.

Lava from the volcano on the island of La Palma in the Canary Islands (Spain), which erupted nine days ago, reached the Atlantic Ocean on Tuesday night.

Television footage showed a river of lava falling from a cliff into the water and producing a large cloud of smoke.

Experts from the Spanish Institute of Oceanography, who have been tracking the progress of the living lava, said “impressive deposits over 50 meters high” are being created that continue to grow.

This event, which has already alarmed the authorities, forced the Canary Islands Volcanic Emergency Plan (Pivolca) to ask residents of nearby neighborhoods to stay indoors.

“When the lava reaches the sea, the closure must be strictly observed,” Miguel Angel Morquinde, director of the Pevolca Response Committee, said on Tuesday.

In addition, the exclusion perimeter on the coast was also expanded to prevent people from approaching the area.

Since Monday, authorities have ordered the confinement of three coastal towns before the imminent lava reaches the sea..

In different areas of Tazacorte, a coastal town, residents have been instructed to stay indoors.

When lava from a volcano like La Palma comes into contact with salt water, “explosions and emission of harmful gases” can occur, Pevolca details.

“When the magma touches the sea, large plumes of water vapor will form because a lot of the sea water will evaporate. This is due to the large thermal disparity between the two: the temperature of the lava is more than 900 degrees Celsius, while the water is hot,” explained Jose Mangas, a professor of geology at the University of Las Vegas. Palmas de Gran Canaria, a few days ago told BBC Mundo, that the temperature is 23 degrees Celsius.”

See also  Simon Leviev, Tinder con artist: what he does and where he is now after exposure
Lava volcano La Palma reach the sea.

“But since water contains chlorides, sulfates, carbonates, fluorine and iodine (among other things), toxic gases will also volatilize,” the academic said.

These gases can irritate the skin, eyes, and respiratory system..

There are also concerns that parts of the coast could collapse and cause explosions.

Since the Cumbre Vieja volcano erupted on Sunday, September 19, lava has destroyed hundreds of homes and many banana crops.

In addition, more than 6000 people were evacuated.

Upon reaching the sea, the lava began to produce toxic gases.

In the face of the devastation, the Spanish government this Tuesday declared La Palma a “disaster zone”, which will allow the transfer of funds of about $12.3 million to the island to provide housing for people who need it.

Some experts fear the eruption could last several weeks or even months, according to AFP.