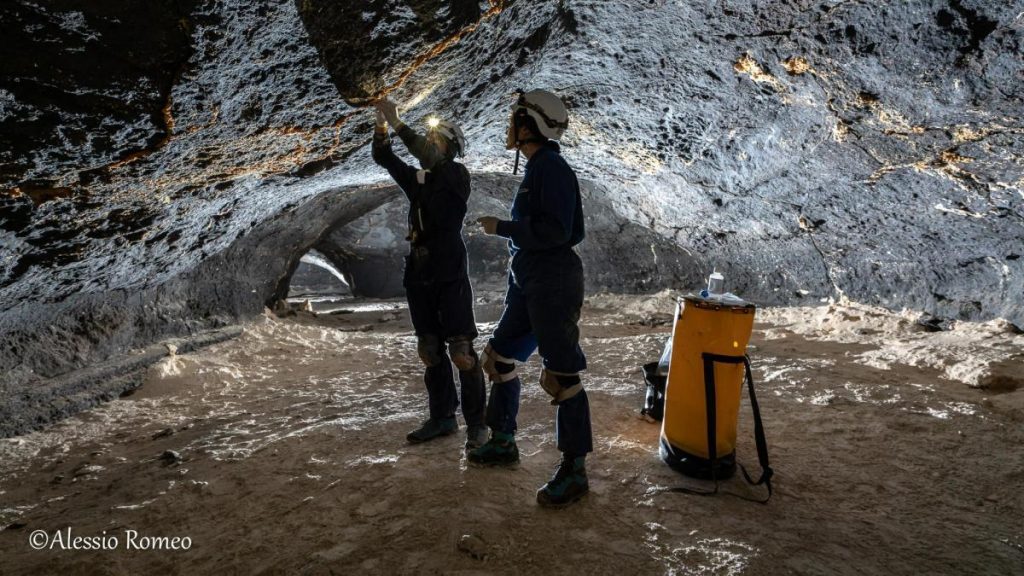 Like a huge glowing mass, Lanzarote emerged from the Atlantic Ocean about 20 million years ago as a result of volcanic activity. The violent origin of the island has a number of implications today. Namely, this scar on Earth is one of the places most geologically similar to the geology of Mars and the Moon on our planet. Hence, past, current and future research is developed in this natural laboratory around one goal: to learn as much as possible about both worlds without leaving Earth.

Interest in Lanzarote as an extraterrestrial isotope began nearly a decade ago by Jesús Martínez Frías, of the Institute of Geosciences (IGEO, CSIC-UCM). The researcher, who has been working in the Canary Islands for more than 30 years, is an expert in planetary geology and astrobiology.

“The Canary Islands have a special place and Lanzarote, in my opinion, is a scientific pearl as a natural laboratory all over the world,” says the researcher. For this reason, Martínez Frías proposed to Cabildo de Lanzarote a cooperation agreement to treat the study of the island as a counterpart. As a result, the field of study was integrated into the Lanzarote Laboratory of Geosciences (LGL), which had previously focused solely on Lanzarote’s geodynamics.

The island’s lava tubes that emerged from volcanic eruptions after their creation are one of the most interesting places to learn about extraterrestrial geology. When a volcano erupted, rivers of lava erupted onto the ground. The surface part of it solidified by contact with air, while liquid rock continued to flow under it. The volcanic tubes were the result of the end of magma pumping once volcano activity ceased.

Mars and the Moon, which have undergone a similar process, have similar lava tubes. However, the caves of both stars reach heights of up to 500 meters compared to a few dozen terrestrial vents. Low gravitational conditions and a thin atmosphere – or even absent in the case of the Moon – are to blame, along with brutal volcanic activity.

Microorganisms in the caves of Lanzarote live in extremely harsh conditions: they do not have light or organic matter, so they use the minerals found inside the cave for their development.

This “stone-eating” bacteria is currently being studied by the Topolan project team, led by Anna Miller, a microbiologist at CSIC’s Institute of Natural Resources and Agrobiology (IRNAS) of Seville. Martínez Frías is also involved in the project.

Miller explains that the microorganisms that grow in cavities are very specific and very specialized in using minerals rather than organic matter for growth. If there were living creatures on Mars or the Moon, they would surely be very similar due to the similarity in the environmental conditions provided by the caves.

“The similarities that exist with the geology of Mars, as well as the types of microorganisms we find here, can help us understand how to search for life on Mars in future human missions,” Miller says.

Lanzarote’s lava tubes are so important to the scientific community that the island will host, for the first time outside the United States, the upcoming International Conference on Planetary Caves. This is the fourth edition and will take place in 2023.

Until now, it was always held in the North American country and NASA was responsible for organizing it. The future version will be coordinated between the European Space Agency (ESA) and the US Agency. The main person responsible for setting everything up will be Francesco Sauro, geologist at the University of Bologna (Italy). “Scientists will come from all over the world because Lanzarote is a wonderful place,” he says.

See also  A creative examination of the interconnectedness of species

In the previous edition, which was held in Texas in 2020, topics such as human habitability, the use of robotic arms for exploration or the properties of these almost extraterrestrial caves were discussed.

Microorganisms live in the island’s lava tubes under harsh conditions

But Lanzarote as a whole is considered a lab, according to Martinez Frias. Space agencies around the world echoed this and have been on Canary Island for years. Astronaut Luca Parmitano or Pedro Duque himself trained on an extraterrestrial island as part of the European Space Agency’s Pangea programme. NASA collaborated on this program in 2017, and the Canadian Space Agency came to test the off-road vehicles.

Basalt, a type of igneous rock, has a very important role in extraterrestrial measurement. As on Mars or the Moon, basalt dominates the landscape geology of Laranzutinho and its composition is very similar to that of the other two stars. If humanity wanted to settle on the surface of selenite or Mars, it would have to be able to farm on those rocks as farmers did with the vineyards of the Heria region.

“Space farming is a necessity because it will save a lot of the logistical costs of transporting food, as well as participating in the life support that will support future astronauts in their daily lives,” engineer Jose Maria Ortega explains via email. Green Moon Project.

The project was born in 2016 with the aim of understanding how a plant grows under the influence of lunar gravity and has one of the favorite places in Lanzarote to make experimental cultivation possible.

“Currently, the Green Moon Project is working on cultivation experiments on a bedrock on the island of Lanzarote in the laboratories of the company InnoPlant, located in Granada,” says the engineer.

In the future, they will go a step further and send small encapsulated greenhouses to the Moon with crops on four types of soil, two of which are basalt from Lanzarote. The work is being carried out in collaboration with the team of researchers who first germinated a seed on our satellite. These belong to the Space Exploration Center of the Ministry of Education of Chongqing University (COSE) in China.

It’s not the only basalt on the Canary Island that travels into space. The IGEO Research Group on Meteorites and Planetary Earth Sciences will send a sample to the EASAT-2 satellite, which was designed and built jointly by the Spanish Association AMSAT-EA and the European University. The launch date has been set for this month but has been cancelled. The next opportunity may come in December.

The rock canary will orbit the Earth for about two years. During this time, the team will study “how a basaltic material similar to lunar basalt behaves in space — how its minerals, textures and overall petrophysical properties respond,” says Jesus Martinez Frias, project coordinator. To do this, the sample will have sensors built in and the team will have a prototype on the ground to run parallel checks.

What was learned in Lanzarote, as well as in other analogues on Earth, will complement missions operating on extraterrestrial terrain such as the Perseverance rover. NASA’s rover will analyze the surface rocks of Mars to establish whether the planet will one day become red inhabited by it.