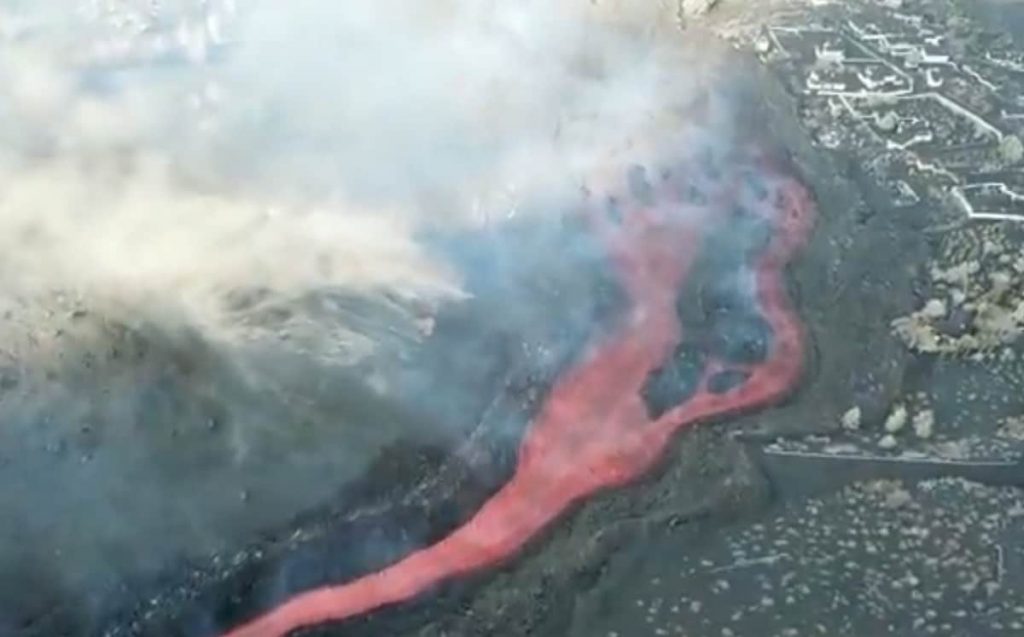 According to the Spanish Institute of Geology and Mining (IGME), the cone of the La Palma volcano erupted during Friday night and during Saturday, Leave a large wash towards the sea.

According to the newspaper ABCGeologist Carlos Lorenzo stated in a video clip broadcast on social networks that The pictures perfectly show that the cone is broken.

He explained while heading with his team to the meeting of the Steering Committee of the Volcanic Emergency Plan for the Canary Islands (Pivolca).

However, the director of the organization, Miguel Angel Morconde, confirmed at a press conference on Saturday that this break “It didn’t have a greater rate of liquid lava because it is at a higher temperature.” According to experts, it is a frequent phenomenon in “strombolian”-type eruptions, such as those experienced by the “beautiful island”.

During this night there was a decrease in activity, but “in the morning it rose again slightly, but continuously.” Thus, the authorities They decided to extend the decision on whether the evacuees would be able to return to their homes for another 24 hours.

In addition, a new source of emissions has been opened to the west of the main source, over Montaña Rajada, as reported by the Instituto Volcanológico de Canarias (Involcan). This focus was working in the early days but stopped broadcasting in the middle of the week.

“This does not concern us, but we are following it,” said Pevolka’s chief. for this part, The lava flow that appeared on Friday slips over the lava that came out In recent days, it has been much smoother and faster than the first washes of the eruption.

The General Directorate of Public Health of the Canary Islands has asked palm tree residents to refrain from outdoor recreational and sports activities to avoid exposure to volcanic emissions, such as those recorded in the active eruption at La Palma. Exposure of healthy people to gases and ash from a volcanic eruption can cause respiratory effects. And the eye and on the skin if it is not covered, as stated by the Ministry of Health of the Government of the Canary Islands.

Meanwhile, a team from IGME’s Geological Emergency Response Unit The ash sampling of the volcano continues with the support of the Military Emergency Unit (UME), This institute also reported on social networks.

Lava has covered a total of 190.7 hectares since the volcano erupted on Sunday, September 19. 420 buildings destroyed so far, as well as 16 kilometers of roads, according to the latest data from the European Union’s Copernicus program satellite.

Although the airspace of La Palma island remains open, as AENA reported on Saturday, The airport is still inoperative due to the large amount of ash. According to local residents, since Saturday, hundreds of palm trees have left their island by boat. “The island is emptying,” said a taxi driver on Saturday. ABC. On the other hand, the arrival of reinforcements of firefighters from Tenerife came to applause.

The President of the Canary Islands, Angel Victor Torres, stressed that people’s safety is a “priority” following the decision of the Pivolca Steering Committee Maintain the evictions carried out on Friday.

The highest regional authority said: “We are still well aware of the development of the La Palma eruption. The steering committee in Pevolca considers it necessary to maintain the preventive evacuation of some of the population centers that were evacuated yesterday. The safety of people is a priority.” A leader in social networks.

The municipal council of La Palma announced that the authorities allowed access so that residents of the Todoc area could come to take their belongings, as reported on their social networks. in this way, A device has been developed so that farmers who have farms in Puerto Naos, El Remo and Las Hoyas can irrigate safely.