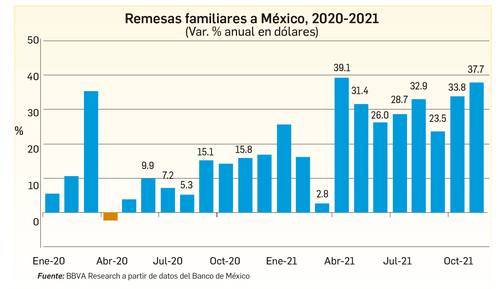 Remittances that entered the country in 2021 continue to report unprecedented numbers. With the data accumulated through November, the transfers of money from Mexicans abroad amounted to 46 thousand and 834 million dollars in the country. The figure exceeds 15.3 percent of the influx that arrived in all of 2020, when it reached a record level of 40,604 million dollars.

Data from the Bank of Mexico shows that once the figure for the whole of 2020, the work of those who left the country in search of better opportunities is also 26.73 percent higher than everything received between January and November of the previous year, when the balance of remittances was 36,954. Million dollars.

Just when observing the November 2021 data, the 4 thousand 665 million dollars that reached the country means an increase of 37.7 percent compared to the same month the previous year, when remittances were 3 thousand 387 million dollars, and the highest balance since there. It is a record for a similar period.

Mexicans’ work abroad, translated into remittances, remains the country’s main source of foreign exchange, above oil exports and foreign direct investment. Financial analysts believe these resources will break the $50 billion barrier when the 2021 figures are revised.

In a report, the World Bank’s Global Association for Migration and Development estimated that remittances to Mexico would reach $52.7 billion in 2021, an amount that would practically equal China as the second largest recipient of these resources, after only India.

At the moment, the cumulative flow of income from remittances between December 2020 and November 2021 has already reached $50,484 million, higher than the $49,206 million cumulative inflow for the 12-month period recorded last October.

The federal government celebrated the progress in resources sent into the country by Mexicans forced to emigrate, because it meant subsidizing the consumption of lower-income populations; However, the World Bank anticipates several reasons for this trend.

In a report published in mid-November, the international body estimated that remittances to Mexico also go to transnational migrants seeking to reach the United States, as well as “digital nomads” working remotely, since more than 7 million Americans entered the country between January and September 2021.

For its part, the BBVA noted that until November, incoming remittances into the country had been on the rise for 19 consecutive months with an average growth of 20%.

“Remittances will exceed the historical cap for the sixth consecutive year with an amount of nearly $51,000 and $500 million and growth of more than 25 percent by the end of 2021,” a study by BBVA detailed.

On the other hand, the BBVA indicated that it is possible that one in five pesos entering the country will come through remittances from citizens who work in the construction sector in the United States.