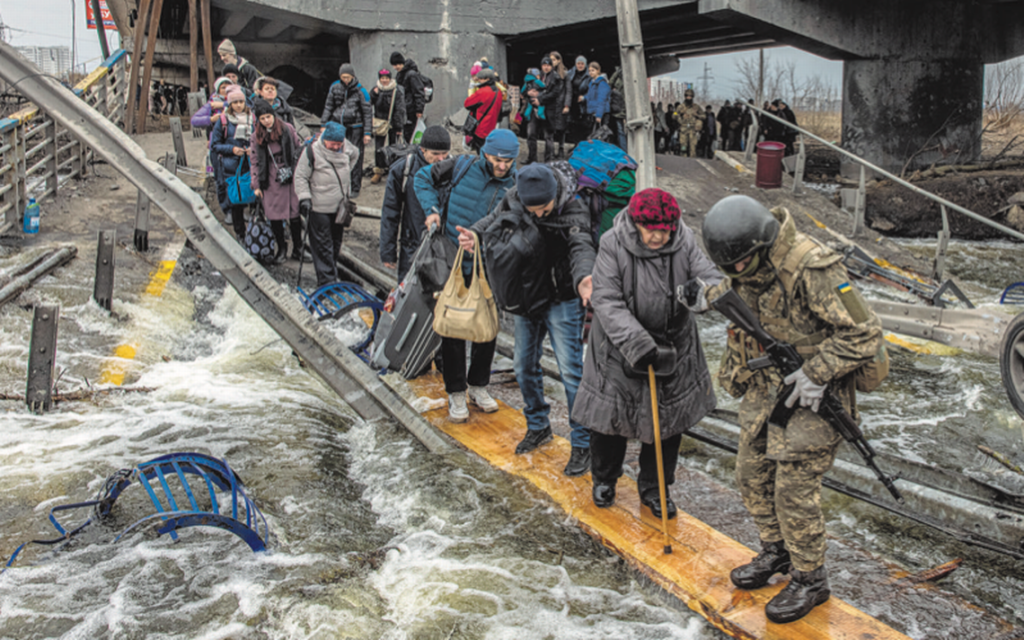 Kyiv. Moscow will facilitate corridors for residents of Ukrainian cities, but Kyiv considers it a farce, while Russian forces continue to besiege cities where more civilians have been killed and a humanitarian tragedy is feared due to lack of food.

Russia has announced local truces in Ukrainian cities starting today to allow civilians to be evacuated from the conflict.

The third round of negotiations between Ukraine and Russia begins

“The Russian Federation announces a ceasefire as of March 8” to evacuate civilians from Kyiv, as well as from the cities of Sumy, Kharkiv, Chernigov and Mariupol, the Russian Defense Ministry cell in charge of operations said. Ukraine.

Hours before the Russian announcement, Ukraine highlighted some “positive results” in the third round of negotiations, which focused on humanitarian corridors, although Moscow said the “expectations” had not been met.

In the morning, Russia announced a local ceasefire and humanitarian corridors to evacuate civilians in several besieged cities.

But four of the six lanes go to Russia and Belarus, so the Ukrainian government completely rejected the proposal.

A spokesman for Ukrainian President Volodymyr Zelensky called the show “completely immoral” and said Russia was trying to “take advantage of people’s suffering to create a television image”.

For his part, the Russian delegate accused Ukraine of preventing evacuation in combat zones and “using (civilians) directly and indirectly, even as human shields.

On the ground, the situation continues to deteriorate. At least 13 people were killed in the bombing of an industrial bakery in Makarev, about 50 km west of Kyiv.

The humanitarian situation has also worsened, with many cities besieged as food is running out and residents are trying to leave at any cost.

In the port city of Mariupol, an attempt to get supplies back failed again and thousands remain trapped without food or water under the bombardment.

A UN report said hundreds of thousands of people inside Ukraine had been cut off from vital aid, and called for safe passage for them to leave the country.

The United Nations has confirmed that 406 civilians, including 27 children, have been killed in Ukraine since the start of the Russian invasion on February 24, although it considered the real number to be much higher.

He added that more than 1.7 million Ukrainians have already crossed into central Europe, while thousands more are heading in that direction.

Meanwhile, a US Defense Department official confirmed that Russian President Vladimir Putin has brought into Ukraine “nearly 100 percent of his combat forces” concentrated in recent months on the Russian-Ukrainian border, it is said, more than 150,000 soldiers.

This source explained, “He sent almost all of them inside” the attacking country, stressing that the bombing of several cities intensified and targeted “civilian targets, civilian infrastructure, and residential areas.”

Zelensky claims that the Russians are preparing to attack Odessa, a strategic port city on the shores of the Black Sea.

The Ukrainian Armed Forces General Staff said Russian forces “began to amass resources for the attack on Kyiv,” the city of more than 3 million people, after days of slow progress in their main advance. south of Belarus.

The Pentagon also claims that Moscow is now seeking to “recruit” foreign fighters, including Syrian experts in urban combat, although Putin confirmed in a televised address yesterday that he would not send recruits or reservists to Ukraine.

For their part, the first volunteers who arrived in Ukraine were already deployed in the outskirts of Kyiv to defend the country’s capital, the Ukrainian army reported.

“The first volunteers of the International Corps for the Defense of Ukrainian Lands are already outside Kyiv,” he said.

Among the volunteers were citizens of the United States, the United Kingdom, Sweden, Lithuania, Mexico and “even India” who “help defend the capital,” the military said.

Ukraine’s Foreign Minister, Dmytro Kuleba, confirmed that nearly 20,000 foreigners were recruited to fight Russian forces in the first 24 hours of operation of the site to facilitate this process, fightforua.org.

Among the requirements for enlistment are the submission of an application to the Embassy of Ukraine in the country of origin, a passport and a document proving military service and participation in hostilities.