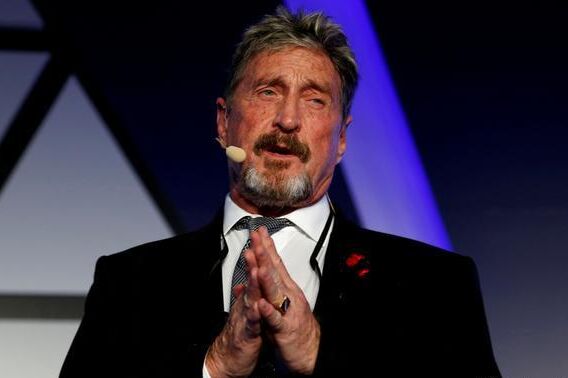 Next Friday, the National Court will consider whether to extradite to the United States businessman John McAfee, the creator of the famous antivirus, who is demanding a trial for his alleged responsibility in a fraud case for allegedly hiding his income from the public purse. .

The National Supreme Court attorney general supports the extradition request related to the alleged tax offenses McAfee committed in 2016, 2017, and 2018, not the previous two years that North American justice attributes to him.

Nearly eight months after his arrest at Barcelona’s El Prat airport, when he was about to catch a flight to Istanbul, the 75-year-old American mogul underwent a fourth extradition hearing before the second section of the criminal chamber.

The United States alleges that the founder of anti-virus software company McAfee is charged with “prosecuting five crimes of tax evasion, punishable by a maximum of five years in prison,” and five others for “failing to pay taxes, and each punishable by the maximum penalty. One-year prison sentence” allegedly committed between 2014 and 2018.

During the hearing, the Supreme National Court will not assess whether McAfee was able to commit these crimes, because in extradition proceedings only the compatibility of crimes provided for in applicable regulations and treaties is analyzed

For its part, the prosecution indicated in its letter that the crimes attributed to it during the years 2014 and 2015 do not have any “criminal significance”, given that the share of the alleged fraud is far from 120 thousand euros, while in the following three years, the alleged tax of the crime committed is greater, In fact, it will constitute three crimes according to the Spanish penal code.

Aside from these fraud cases, Justice in the United States is also investigating allegations of fraud and money laundering for promoting cryptocurrency on Twitter to investors between 2017 and 2018. Investigators suspect that his advisor has seized “more than 13 million dollars” through “fraudulent schemes.” “on the Internet.

They both deemed that they both used the “old” method of pumping and emptying, and purchasing large quantities of “altcoins” (cryptocurrency alternatives to bitcin) at such low prices that McAfee would later recommend them on Twitter in a deceptive manner, adding to the value.

His arrest in Spain on October 3, 2020 when he was about to leave the country, was not the only one behind the anti-virus pioneer, who was also arrested in the summer of 2019 in a port in the Dominican Republic with several weapons. On board your yacht.

Days earlier, the businessman mentioned that he was leaving the United States because the CIA tried to arrest him for tax offenses. Finally, Dominican authorities released him and McAfee traveled to the United Kingdom.

When he was arrested in Spain, the judge sent him to preventive prison, and the second section of the criminal chamber repeatedly refused to release him, considering that the risk of escape and his meager personal and family roots weighed.