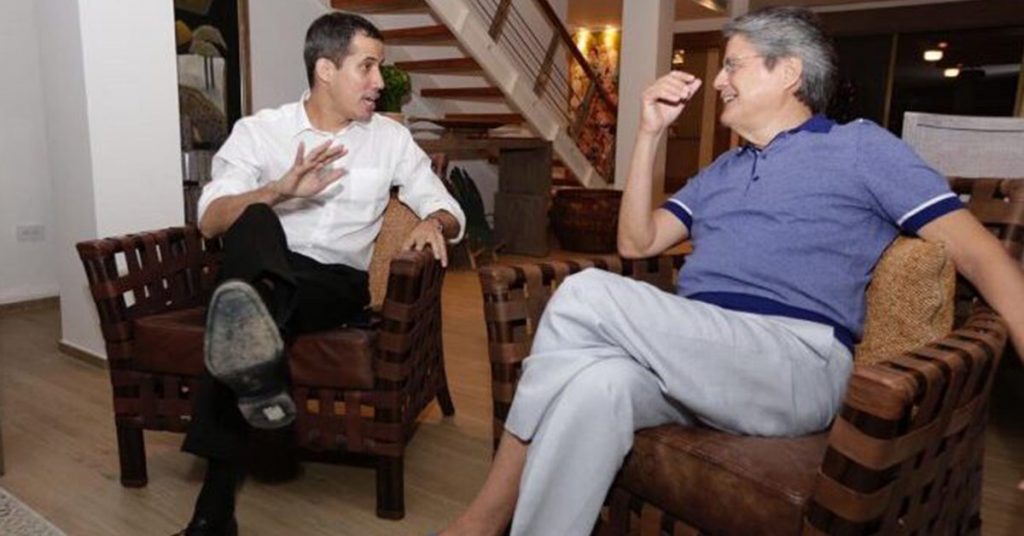 On the day of his inauguration, Juan Guaidó congratulated the new President of Ecuador, Guillermo Lasso, and He highlighted the importance of his coming to power for the Venezuelan cause.

“We will work together to defend democracy in the region, and we know your commitment to Venezuela and freedom.”The Venezuelan interim president said on his social networks.

We congratulate President Lasso on his inauguration and we wish him a successful administration. “We appreciate your invitation to accompany him,” the opposition leader added.

The vast majority of Venezuelan immigrants who arrive in Ecuador consider this Andean country as their final destination, according to the Tenth Influx Monitoring Survey of the Venezuelan Population.

96 percent said that the migration route ends in Ecuador while two percent will continue in Peru, one percent to Chile, one percent to other countries and less than one percent will return to Venezuela, “according to a statement issued by the international organization. The report, for February and March of this year, has reaffirmed the trend for some time Ecuador appears to be increasingly attractive to immigrantsBecause it was primarily a transit country, or so it seemed, according to official data.

Due to more than 1.7 million Venezuelans crossing the Ecuadorian border in recent years, the vast majority have been on their way to Peru and Chile, and Only 400 thousand remained in the country According to official Ecuadorian statistics that, unofficially, up to 600,000 were collected by some organizations.

For his part, the Secretary-General of the Organization of American States (OAS) said, Louis AlmagroHe also welcomed the inauguration of Lasso as the new President of Ecuador on Monday, and expressed his full support for this body to continue progress in favor of democracy and human rights.

And he continued in his message, “He has our full support from the Organization of American States to continue pushing the agenda of American countries in pursuit of democracy, human rights, development and security.”

Businessman, banker and politician from the right of center Guillermo Laso was sworn in on Monday as the new president of Ecuador For the next four years in a ceremony held in front of the National Assembly (Parliament), in Quito, and attended by senior officials from several friendly countries, including the King of Spain, Felipe VI; Brazil presidents, Jair Bolsonaro; From Haiti Juvenil MoyesAnd from the Dominican Republic, Louis Abenader, Among other authorities.

At 65 Laso replaced outgoing President Lenin MorenoIn his inaugural speech, he promised to build a state of “reunification”, away from the political hatred of the past, and open to the world and national unity among all sectors of society.

Laso assumed the presidency of Ecuador After Correísmo was defeated And restore power to the right after two decades.

The 65-year-old former banker inherits an economic crisis that spilled over into social and health due to COVID-19, with Ecuador ranked seventh in Latin America with the most cases (418,851) and deaths (20193).

“Those who pursue all power end up seeking mercy for the crimes that happen when that power gets out of control.” So he assured that his government would remain faithful to the margins dictated by the laws.

On the government’s role, he explained: “We do not aim to belittle the state, but rather to maximize its ability to serve the poorest people.”

After that, he asked to join all efforts to continue and expand the vaccination campaign against COVID-19, including hospitals and private companies. We will respond on multiple fronts to maximize solutions surrounding the virus. He stressed that it will be the largest logistical spread in our history. In this sense, he repeated his promise to vaccinate 9 million Ecuadorians in the first 100 days of his government.

For his part, Lasso opened Ecuador to global free trade and offered to restore the “democratic spirit” of the country after 14 years of struggle over former socialist president Rafael Correa. Ecuador announces today that it is opening its doors to world trade.And he expressed in a speech after his inauguration in the unicameral parliament, indicating that he would seek to enter “in the shortest possible time” the oil country in the Pacific Alliance (Chile, Colombia, Mexico and Peru) as a “full partner.”

“We will open Ecuador to free trade agreements with our greatest allies,” he said.

“We have started the struggle to restore the democratic spirit of our country,” the former right-wing banker said, referring to this “Political persecution has ended in Ecuador.”, An evil ascribed to Correísmo.

Guillermo Laso assumed the presidency of Ecuador: “The era of leaders is over”
Ecuador has already vaccinated 2 million people against COVID-19 and Lasso has promised to increase the rate