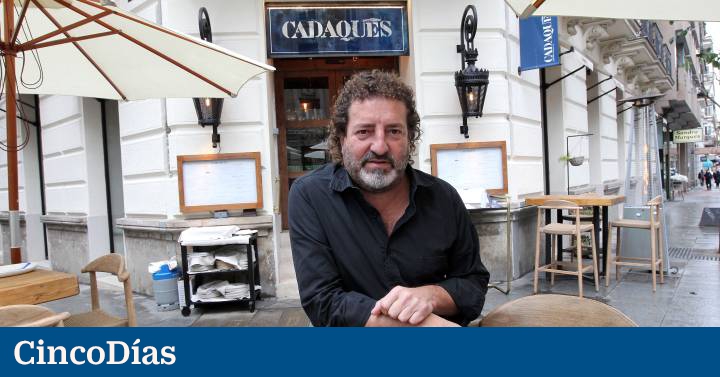 He learned to cook when he was five, on a stool next to his grandmother, who helped her peel garlic or dishes. When he left the university, Iñaki López de Viñaspre (Vitoria, 1963), together with his brother Mikel, opened Irati Restaurant in Barcelona’s Gothic Quarter. It was 1994 when they planted the seed of the Sagardi Cocineros Vascos group, a project born to make Basque cuisine known outside of the Basque Country, consisting of 35 restaurants spread in different countries, such as the United Kingdom, Argentina and Portugal, Mexico and the Netherlands employ 900 people, and their turnover reached 48 million in a year. 2019, a number that decreased by 70% in 2020 due to the epidemic. Despite the health crisis, a new restaurant opened in Madrid in January this year, the fourth in the capital Cadaques, which has a mother’s home in Barcelona.

Is he brave to open a business now?

It was something we had planned before the pandemic, and the project had to be defended. The opportunity arose in my local [ubicado en la calle Jorge Juan de Madrid] Not a restaurant before, it was Hannibal Laguna’s wedding dress designer shop and workshop. I think it’s a good area, as there is a lot of integration rather than competition. Plus, I think there’s always room for those who do it well, with love. We have great acceptance, with some clients appreciating the display and climate in different space. Although the year will be difficult, similar to 2020. In other cities, the same thing does not happen as in Madrid. We are closed as a country.

Will activity resume as in pre-pandemic times?

People will benefit from bars and restaurants again. If we preserve the fabric, the supply, Spain will be a magnet for tourism. But we need direct help, because we are being blamed for infections as it happens in other countries. We don’t have a formula going forward. The strategic project that we had for the next few years is kept in a drawer with 25 locks. Now is the time to save the company and the project, as many families from this group live. The goal now is to get back to where we were.

What are the distinctive features of the Sagardi group?

Product kitchen, traditional cookbook and where fire is the central element. One of our distinguishing features is that we work directly with a network of producers, with livestock keepers, fishermen, farmers … We buy direct and limit the production of many of them. At this time, the entire primary sector is affected, the same thing happens for wineries. This is a chain that goes far beyond what a restaurant is. Another component is team cohesion. As we grow, we are creating a solid tapestry of talent and value.

Throughout their history they have suffered from various crises.

We were born after the crisis of 1992, then came the crisis of 2008-2010 and now this crisis, which is the most dangerous of all, with a significant drop in GDP. We are in Europe and this is a competitive advantage for our moment. This crisis is leaving us poor, and it is imperative that we see the clothes or rags that leave us in them. The important thing is to go ahead and fight for business continuity. Now it is raining in the wet, as restoration is unfairly criminal, it is not a place of infection.

You have a Sagardi restaurant in London, how do you think Brexit will affect you?

Right now, it doesn’t affect us, nor the teams. I think that in the future there will be flexible agreements in order for the European economy to remain dependent. After this happens, economic resilience formulas will be sought to flow between the UK and Europe, as they are dependent. In Spain there are many Brits who have a home here. In these troubled times, logic appears to be enforced, although it does not appear to be the case at the moment.

They are part of a family business, have you got an offer for that?

We had received an offer from the venture capital firm, but we canceled the process because it involved an early sale of the company. Sometimes, when the capital comes in, what comes is a change in the contribution. We want our growth to be organic, to close operations with the support of banks and reinvest. We are three siblings of the five we are, with roles distributed. Mikel is the Director of Operations, Octavio is the Chief Financial Officer and I, as President, take care of the strategic vision.

Do you have a second generation running around?

We do not have a meaningful vision. That’s why we’ve professionalized the company. We cannot make young people doomed to follow the family saga, we must allow them freedom to choose their own path. It would be disappointing if our kids didn’t do what they like. This profession sacrifices a lot and demands a lot of passion. They work from nine in the morning until dawn, and there are several clubs to play. Cooking is like music.