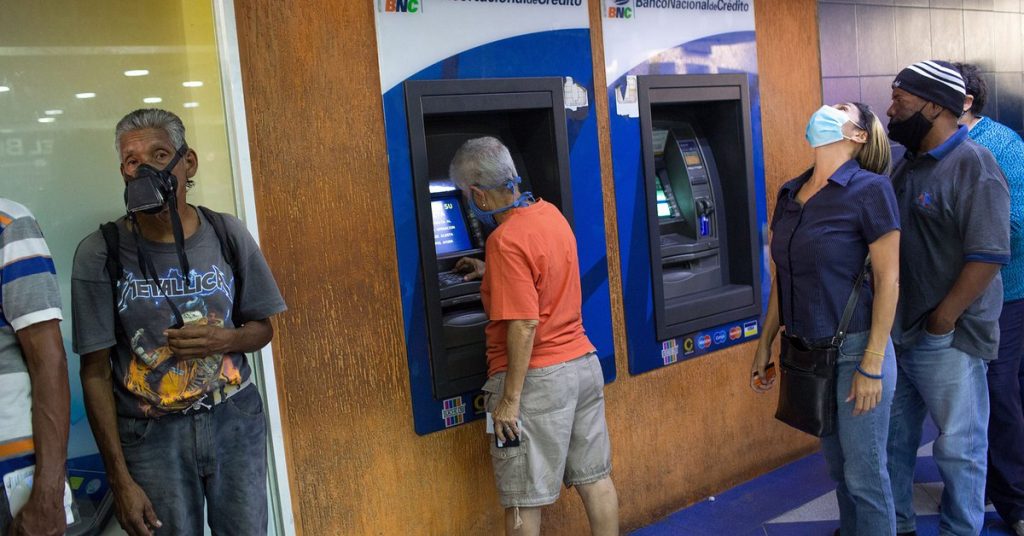 cash shortage in Venezuela, happened because of high inflation, causing state banks to close their offices and reduce the number of ATMs, so Citizens have to make long journeys or long queues every day to find bolivars.

The Secretary-General of the Federation of Bank Workers and Allied Workers (Fetrabanca), Claudio Rivas, explained that In December 2019, they registered 7,512 ATMs in the country, but a year later there were 5,762 ATMs left, which is a 23% decrease.

“This number is down due to high inflation, an issue De facto dollarization And to maintain these ATMs that need foreign currency to be able to change them or to be able to bring in the parts that you need to adapt or maintain.”

Rivas confirmed it Banks have the resources to repair ATMs, but “do nothing with the ATMs in good condition” if “the tools, such as cash, are not provided for you to fill with bills.”

That is why he indicated that, Due to the shortage of bolivar, ATMs lost their jobs in the Caribbean nation.

“The Central Bank of Venezuela (BCV), when it distributes (the banknotes) to the banks, to the main coffers, it is not enough to supply the whole country or all the banks,” added.

Rivas said that ATM deduction started in 2016, when there were nearly 10,000 units all over Venezuela, but that number is decreasing year by year.

See also  Repsol CEO: We are proud that all the beaches are stained and we are working to clean them

According to the data of the Supervisory Authority of Banking Sector Institutions (Sudban), an institution that regulates Venezuelan banks, In March 2014, there were 9,542 ATMs in the country, but in the last published report, in March of this year, they reported that there were only 2,275.

Rubén Alonso, a 43-year-old teacher, said that when he needs Bolivar in cash, he tries not to use the ATM, because “They have no reason to exist (…) It is not easy to find a well-functioning ATM”, added.

Your options for getting tickets are Make transfers to third parties who have money and transfer it to you, ask a friend or go directly to the bank’s offices.

But due to the economic crisis and the COVID-19 pandemic, banks have also been forced to close agencies. The Secretary General of Fetrabanca noted that in 2019 there were more than 7,400 bank branches in the Caribbean country, but now there are 3,700 remaining, which is a 50% decrease.

“It is not only the epidemic (…) the economic situation that has affected the banks, They have a very high statutory reserve at the moment, Rivas said, even though the government has reduced it from 100% to 85%, it is still high.”

This results in, according to your interpretation, That the profitability of banks is affected, which necessitates economic action. “First (must) revitalize the economy (…), reduce public spending, Stop printing inorganic banknotes, This affects us a lot because it results in inflation.”

Regarding a possible remittance, Fetrabanca Secretary pointed out It is especially necessary in accounting matters. “We are already stuffed with zeros on the right and that has had serious consequences when it comes to (making) a daily check for any bank office,” he said.

but nevertheless, He noted that without corrections, there would not be much to remove zeros from the currency: “We should remove the high legal reserve that the bank has, It will help revitalize the productive apparatus and lend to small and medium-sized merchants.”