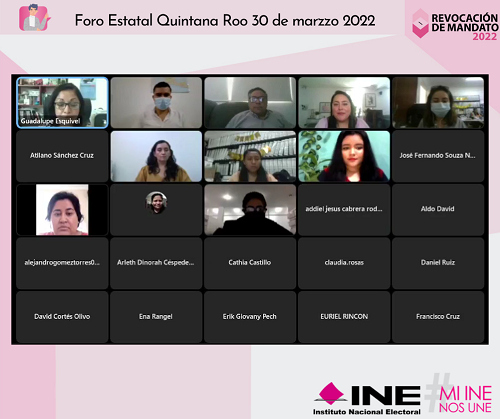 With a view to promoting participation, informed discussion and reflection of citizens within the entity in the process of de-Mandate and in compliance with the provisions of the Political Constitution of the United Mexican States (CPEUM) and Repealing Federal Law (LFRM), the Local Executive Council of the National Electoral Institute (INE) convened in Quintana Roo, through the Training Committee Electoral and Civic Education, a state discussion forum on the abolition of the mandate through the institution’s social networks.

In this sense, the preferred profile of the speakers consists of academics, researchers and political analysts, as well as students who seek to have their participation based on arguments supported by accurate information, avoiding assumptions and false news.

In the cover letter, the Executive Member of the Local Council of the National Institute of Statistics in Quintana Roo, Claudia Rodriguez SánchezHe said, “This exercise is being carried out in accordance with the provisions of the Federal Law to Abolish the Mandate within the framework of freedom of expression and debate. It should be noted that the views of speakers or questions and comments from the public are the responsibility of those who express or issue them, and do not at any time reflect the position of the National Electoral Institute (INE) on this practice.

he added, “The purpose of the forum is to publish the views and opinions of participants who have accepted the invitation of the National Electoral Institute, in this space they will present their arguments for or against the President of the Federal Executive Branch continuing in the constitutional mandate for the period 2018-2024.”

In this context, he stressed that this type of forum is contributed by the National Elections Institute so that citizens get more information to go to the polls to cast their free and reasonable votes on April 10.

The exercise was developed in three sessions and the following topics were addressed:

In the first round of panelists’ intervention, the Coordinator, Vote for Electoral Training and Civic Education for the Local Council, Guadalupe Esquivel Monroy, opened the first question: What is the significance of the celebration of the withdrawal of the Mandate for the democratic life of the country, for it is the first time in history that citizens have the power to remove a president from office due to a loss of confidence?

Committee members engaged for 5 minutes in each round, followed by a first question-and-answer session to follow up on the following question:

How does de-commissioning encourage citizen participation, given that in states like Quintana Roo, due to various elements, there are few residents who go to the voting booths?

The third round ends with:

See also  The government will allocate 3,843 million to the Ministry of Science in 2022

The results of the process of canceling the mandate in accordance with the regulatory legal framework. (Binding majority and declaration of results by electoral authorities).

The event lasted approximately 60-90 minutes, and the promotion was objective, impartial and for informational purposes.