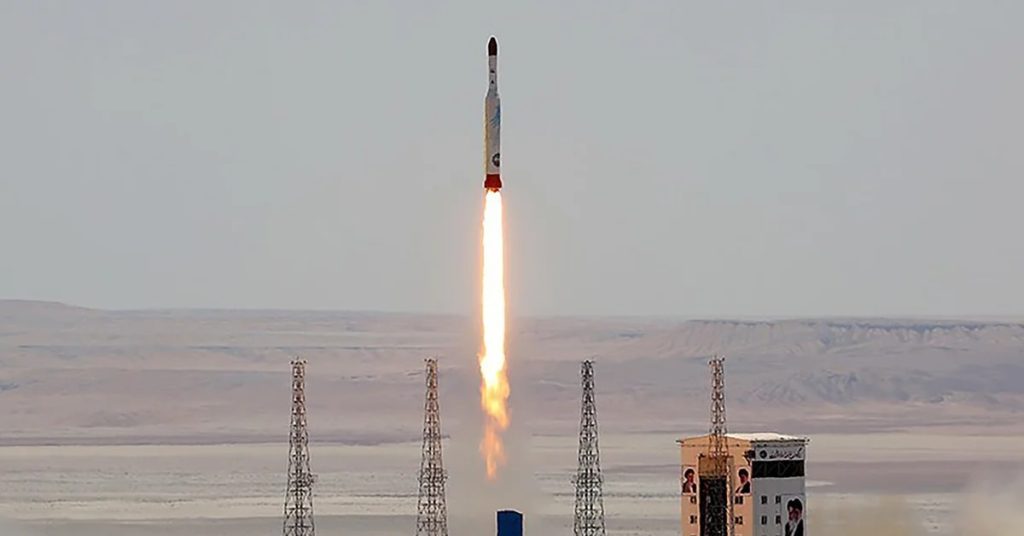 An Iranian Simorgh missile similar to the one fired on Thursday

On Thursday, the Iranian regime announced the launch of a rocket carrying three satellites into space.Although it is not clear if any of the objects have entered orbit around the Earth.

The report by state TV and other semi-official Iranian news agencies did not say when the launch took place or what devices the operator had brought with them. but nevertheless, The launch comes amid tough negotiations in Vienna over the Iran nuclear deal.

Previous versions drew rebuke from the United States. The US State Department, the Space Force and the Pentagon did not immediately respond to requests for comment.

Ahmad HosseiniA spokesman for the Ministry of Defense said that the missile is a missile will sing the “PhoenixHe said the three devices sent a distance of 470 kilometers (290 miles).

but nevertheless, Officials have been silent about whether the launched objects have actually reached orbit. Iran’s civilian space program has suffered a series of setbacks in recent years, including fatal fires and a missile explosion on its launch pad that caught the attention of former President Donald Trump.

Activity was observed a few weeks ago indicating an imminent launch at the Imam Khomeini Spaceport in Semnan Province, Iran. (Planet Labs Inc. via AP)

These launches have raised concerns in Washington About whether the technology used to launch satellites can enhance Iranian ballistic missile development.

The United States says the launch of such satellites defies a UN Security Council resolution calling on Iran to stay away from any activity related to ballistic missiles capable of delivering nuclear weapons.

Iranwhich has long said that it does not seek to acquire nuclear weapons, It ensured that there was no military component to the satellite launches and missile tests.

Impact on the nuclear deal negotiations

However, the announcement of the missile launches when nuclear negotiators meet in Vienna corresponds to Tehran’s hard-line stance under the president. Ibrahim RaisiHe is a newly elected conservative cleric.

Iran’s new demands in nuclear talks angered Western countries Regional tensions have increased as Tehran continues its nuclear advance. Diplomats have repeatedly raised the alarm that time is running out to restore the agreement, which collapsed three years ago when the United States unilaterally withdrew under then-President Trump.

Iran has now abandoned all restrictions of the agreement It increased uranium enrichment from less than 4% to 60%, a short technical step from weapons levels. International inspectors face challenges in monitoring Tehran’s progress.

Viewed satellite images Associated Press They suggested an imminent launch earlier this month. The pictures showed the preparations for the space port in the desert plains in the countryside of the governorate Samnan In Iran, about 240 kilometers (150 miles) southeast of Tehran.

During the past decade, IRán sent several short-lived satellites into orbit and in 2013 launched a monkey into space. But under Raisi, the government appears to have stepped up its focus on space. Iran’s Supreme Space Council met for the first time in 11 years.

Israeli Foreign Minister Yair Lapid with Infobae: “Iran is the main sponsor of terrorism in the world”
Negotiations to save the nuclear agreement with Iran: Europe called for urgency, and the United States regretted the “modest” progress
What are they looking for and how far can Vladimir Putin, Xi Jinping and Ali Khamenei go?